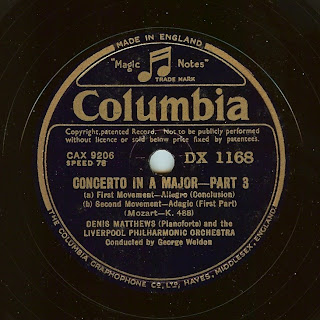 Monday marks the 92nd birth anniversary of the British pianist Denis Matthews, who came to a sad end - he committed suicide on Christmas Day, 1988.  He was most famous for his recordings of Mozart and Beethoven, with at least eight of Mozart's concertos in his discography.  Here is the first of these, made in 1944, when he was in R.A.F. uniform:

A little over a year ago, I presented several single discs of Matthews playing solo works by Haydn, Mozart, Beethoven and John Field.  Here is another to add to that collection:

According to CHARM, Matthews recorded at least five of the Bach "Well-Tempered Clavier" preludes and fugues, but only this one and the No. 1 in C were actually issued.  Matthews' Bach discography is rather meager, but it does include a fine version of the Triple Concerto in C, BWV 1064, with Edwin Fischer and Ronald Smith, from the Bach anniversary year of 1950, available on an EMI CD.
Posted by Bryan at 8:45 PM 11 comments:

Most people, if they remember the name of the Hungarian-born violinist Emil Telmányi (1892-1988) at all, remember it as belonging to the inventor of the spurious Bach bow (or Vega bow), designed to be able to play on, and sustain, all four strings of the violin simultaneously, for use in the unaccompanied Bach violin works.  But Telmányi was also the first internationally famous exponent of the music of Carl Nielsen (whose daughter, Anne Marie, he married in 1918), and made this first recording of Nielsen's Violin Concerto, for me one of the most delightful of all twentieth-century violin concertos, in 1947: 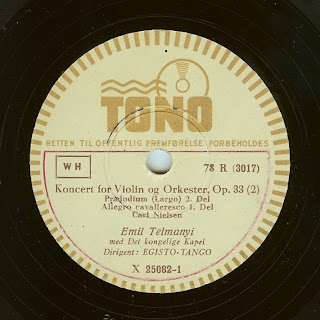 This was Barbirolli's second-ever recording with the Hallé Orchestra (the first was of Bax's Third Symphony), of which he had assumed control beginning with the 1943-44 season, having returned to England fron New York.  There, as director of the Philharmonic-Symphony, he had had a rocky relationship with the music critics, who constantly compared him unfavorably with Toscanini, whom he had succeeded as the Philharmonic's music director.  While in New York, however, Barbirolli had made some important recordings, first for Victor and then for Columbia, including symphonies by Sibelius (the First and Second), Schubert (the Fourth) and this brisk, bracing account of Mozart's "little G minor" symphony: 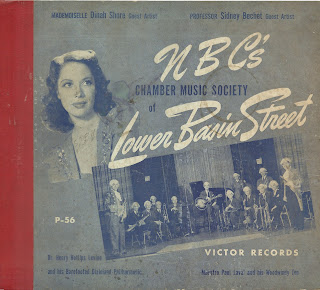 The Chamber Music Society of Lower Basin Street was a weekly radio program that began on NBC's Blue Network in 1940.  (The National Broadcasting Company originally had two radio networks, the Red and the Blue; the latter was sold off in 1942 and became the American Broadcasting Company - ABC - in 1945.)  The show featured some of the finest jazz musicians of the day, and had two resident bands (which shared the same rhythm section) - Henry Levine's Dixieland Octet, whose leader was a former member of the Original Dixieland Jazz Band, and Paul Laval's Woodwindy Ten.  On the Society's debut album, which I present here, Levine's group was rechristened the "Barefooted Dixieland Philharmonic" - although, as can be seen in the slightly coffee-stained picture, the members are not only very much shod, but periwigged!  For the Society's offerings, broadcast and recorded, were usually presented in a mock-serious format that poked fun at the stuffy classical music presentations of the day.  The album even comes with a booklet mimicking those of the Victor Musical Masterpiece Series, with tongue-in-cheek analyses of each song (a PDF file of this booklet is included with the download).

For me, the last three sides are the most enjoyable.  "Dinah's Blues" manages to work into its lyrics the names of the show's two corporate sponsors, NBC and its parent, RCA Victor; "Shoemaker's Holiday" is a delightful romp featuring the bassoon, and this arrangement of "Basin Street Blues," with its ending that spoofs Haydn's "Farewell" Symphony (the bass being the instrument left to finish the piece "in the doghouse, but good"), was apparently also the ending number on every broadcast.
Posted by Bryan at 9:25 AM 7 comments:

Today I present three recordings featuring the man whom many, myself included, consider the greatest cellist of all time, the tragically short-lived Emanuel Feuermann (1902-1942).  He really should have lived into the era of stereo recording, but he died at age 39 of complications from an operation for hemorrhoids; Toscanini, who was one of the pallbearers at his funeral, is said to have wept during the procession, saying, "this is murder!"  At the time of his death, Feuermann was planning to take up the viola da gamba, so that he could present Bach's three sonatas for that instrument as authentically as possible.

Despite the short time available to him, he left a precious recorded legacy.  But, alas, no unaccompanied Bach suites - I suppose these works were perceived at the time as belonging to Casals, so Feuermann never got to record one - so the closest we can get to what that may have sounded like is via his 1938 set of a Reger suite, and this unaccompanied sonata by his friend, Paul Hindemith: 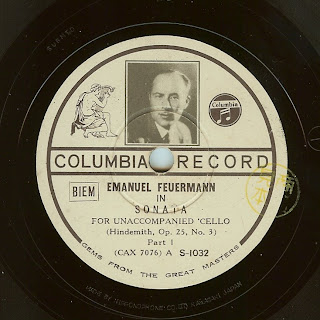 Feuermann left us several concerto recordings, including a wonderful Brahms Double with Heifetz, and this one of the Haydn D major:

On a personal note: this is the third copy of MM-262 that I have owned; the first one I had as a boy of ten, inherited from the discarded 78 library of Emory University, where my mother was teaching music at the time.  It was my introduction to Feuermann's art, and to this day the Haydn D major is my favorite of all cello concertos, largely on the strength of this recording.

Finally, for fans of Eugene Ormandy, another of his early Victor recordings, featuring Feuermann - the first of four recordings Ormandy was to make of Strauss' "Don Quixote," but the only one with a cellist other than first-desk Philadelphia players: 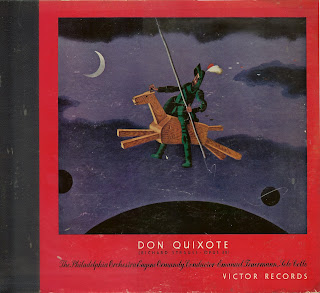 Believe it or not, eighteen months after starting this blog, I have reached my 100th post!  So, something rather unique seems in order, and I therefore offer three of my own performances as a pianist.  I've posted the Haydn here before, but only as MP3 files, so here are the FLACs to go with them.  The Vaughan Williams I have posted to YouTube, but the Brandenburg Concerto is truly new - I only got the CD myself this past Monday.  So, without further ado, here are the links: 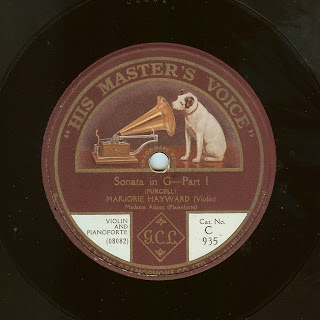 Earlier, when I was doing my "reissue" program, I had occasion to post a recording by Marjorie Hayward, that of the Beethoven "Kreutzer" Sonata with Una Bourne, and to direct attention to other Hayward recordings available at the CHARM website.  Well, here's one CHARM doesn't have (although they do have a very fine Frederick Grinke recording of the same work, made a quarter of a century later).  It's a perfect gem of a Purcell sonata, first published only in 1901:

Does anyone out there have any information about the elusive Mme. Adami, who accompanies Miss Hayward on this recording?  Even her first name seems lost to posterity.  She must have been the Gramophone Company's house accompanist.  The HMV catalogues of the early 1920s (downloadable from the British Library) do not appear to have deemed it neccesary to credit her by name, except for this one disc.  Nor, of the sixteen or so records that CHARM possesses for which she plays accompaniments, does her name appear on any of the labels.
Posted by Bryan at 10:24 PM 5 comments: