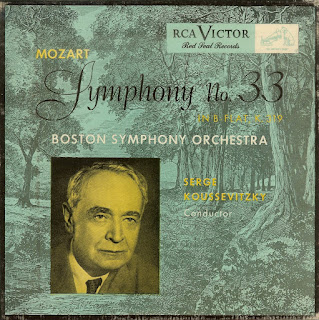 In a recent issue of Classical Recordings Quarterly, in an article entitled "Why Don't the Record Companies..." (the same article that inspired this post), Donald Manildi laments the lack of a systematic approach to CD reissues of recordings by Serge Koussevitzky (1874-1951), the great Russian conductor, such as that given to comparable figures like Toscanini and Stokowski.  He notes that many CD reissues of Koussevitzky's considerable legacy have been allowed to go out of print, and that his Mozart recordings, in particular, have largely been untapped.  Well, in an attempt to rectify that situation, I present three major Mozart works, all recorded at Tanglewood in the late 1940s:

Some may find Koussevitzky's approach to Mozart a little hard-driven, particularly in the symphonies; he is much closer to Toscanini than to Beecham or Walter.  Perhaps this is why his Mozart recordings have been ignored - they are unfashionable.  No such reservations about the Serenade!  This is a wonderfully relaxed and unbuttoned reading from the Boston wind players, and the only regret here is that two of the movements (as well as one of the Menuetto's trios) were omitted.
Posted by Bryan at 10:45 AM 2 comments:

Wartime Rarities on the "Yellow Label" 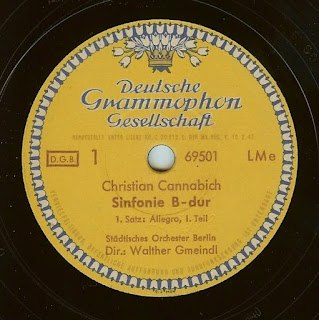 The famous Deutsche Grammophon yellow "tulip" label, pictured above, made its debut in the late 40s, when the company sold the German rights to the use of the "His Master's Voice" trademark to EMI.  In 1949, the "yellow label" was introduced to American record buyers without much fanfare, when the London Gramophone Corporation (importers of English Decca records relabelled as "London Records") began importing them, charging quite steep prices (almost $3 per disc) and issuing some 30 sets in the plainest imaginable American-made packaging without documentation or liner notes.  The strength of the series was in its unusual repertoire, often first recordings of the works in question.  I have two such sets, and here they are:

I was completely unfamiliar with either of these works before obtaining these sets.  The pleasing symphony by Mannheim-based composer Christian Cannabich (1731-1798) is unusual in that its scoring replaces the flutes and oboes of a Classical-period orchestra with clarinets.  The Respighi concerto has none of the flashiness usually associated with this composer; with its lyrical bent I'm strongly reminded of the Delius violin concerto.

It will be noticed that both of these recordings emanate from the Third Reich, and in fact, that was the case for all but three of the London-issued DGG sets.  As with the Vox issue of French Polydor records as an album set that I posted earlier this month, the set numbers of these two issues are visible only on the spines of the albums; however, these set numbers are given in various reference sources (among them, the World's Encyclopedia of Recorded Music, and David Hall's "Record Book" of 1950).  So it's possible to reconstruct a numerical listing of these sets:

Only the Ravel, Bruckner and Beethoven Egmont sets are postwar recordings.  Probably this was inevitable given the conditions in Germany after the war.

The London Gramophone Corporation didn't import Deutsche Grammophon recordings into the USA for very long; by the early 1950's American Decca was releasing DGG material in its own classical LP series, and the yellow label became exchanged for a gold one.
Posted by Bryan at 12:19 AM 11 comments:

My Ormandy series continues with some rather rare repertoire for him - two early Schubert symphonies in nice, well-sounding, straightforward performances.  The odd thing about this release is that it didn't appear until 1972, a full ten years after both works were recorded, and four years after Ormandy and the Philadelphians had moved back to RCA!  Columbia, of course, had plenty of Ormandy still "in the can" after this move, but this was one of the last releases, and certainly one of the most delayed.  My guess is that the slight differences in pitch that are noticeable between tape edits in certain sections (particularly the Scherzo of No. 6) mitigated against releasing these performances in 1962:

Two other Ormandy recordings were released at the same time as this Schubert LP, and bear adjacent catalog numbers.  M-31634 is Beethoven's Fifth and Eighth Symphonies, itself a reissue from his complete Beethoven cycle from the 60s, and D3M-31636 is a three-record set of the Brahms symphonies, recorded in 1966-68, and not a reissue.  This lately turned up on eBay, sealed, and fetched the unbelievable price of $152.50!  Both the Beethoven and Brahms issues bear the phrase "The Fabulous Philadelphia Sound Series," which is missing from the Schubert issue.
Posted by Bryan at 11:28 AM 6 comments: 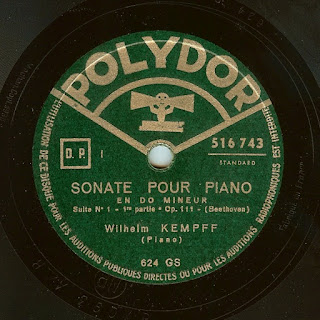 The last of Beethoven's mighty series of piano sonatas, the great Op. 111 in C minor, was first recorded in 1932 by Artur Schnabel, and issued in the first volume of HMV's Beethoven Sonata Society, which was a limited edition.  So the work didn't receive widespread distribution on records until the mid-1930s, when versions appeared by Egon Petri (for Columbia), Wilhelm Backhaus (also for HMV), Elly Ney (for Electrola) and this one by Wilhelm Kempff:

As with his version of the "Hammerklavier" Sonata recorded at about the same time, this was the first of three recordings Kempff was to make of the work.  The other two belonged to complete Beethoven cycles in the early 50s (mono) and the 60s (in stereo), also for Deutsche Grammophon.

My copy of this, on French Polydor, was imported into the USA after the Second World War by Vox, and issued by them in an album, No. 455 - a curious procedure for them, but fortunate, for they normally pressed their own dubbings of Polydor material, and inferior dubbings at that, on inferior shellac.  This is the only imported set of theirs I've ever seen - does anyone else know of any other? 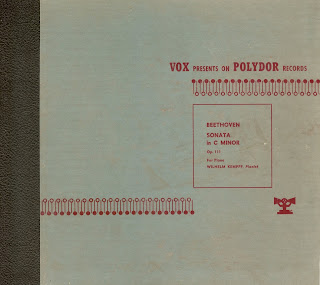 "Richard Wagner, I hate you - but I hate you on my knees."  Thus spake Leonard Bernstein about the composer whose bicentennial (May 22, 1813) we celebrate this month, and the quote gets to the heart of a curious paradox about Wagner: that the most anti-Semitic composer in music history, whom Hitler idolized above all others, should have among his most persuasive interpreters a number of Jews, from Hermann Levi in his own time to Klemperer and Bruno Walter during the Nazi era.  The set I present today offers a graphic example of this dichotomy.  One-fourth of this set features the inspired direction of Bruno Walter with Lotte Lehmann and Lauritz Melchior, recorded in Vienna in 1935 (at the same time as their famous recording of Act I).  The remainder, recorded three years later in Berlin (after the Nazis' annexation of Austria), features the reliable but relatively workmanlike direction of Bruno Seidler-Winkler, with a young Hans Hotter as Wotan.  EMI has offered this recording as a CD reissue, but in order to fit it complete on one disc has cut out one of the orchestral interludes.  I offer it complete, but with a choice of downloading one long file (82 minutes) or, for those who like to burn CDs from their downloads, in two files of 43 and 39 minutes respectively:

This act contains five scenes, of which 1, 2 and 4 were recorded in Berlin, and 3 and 5 in Vienna.  The description "nearly complete" is necessary because five cuts, totalling 97 bars, are made in Scene 2.
Posted by Bryan at 11:11 AM 2 comments: