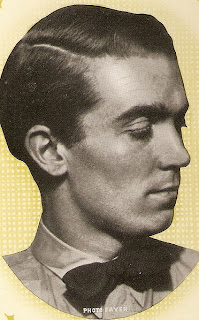 The British pianist and musicologist Denis Matthews (1919-1988) was most closely associated with the music of the great Viennese Classical masters, especially Mozart and Beethoven.  Perhaps his most famous recording is that of the Beethoven Horn Sonata, made in 1944 with Dennis Brain, both Den(n)ises being in R.A.F. uniform at the session; this has been reissued on a Testament CD along with an equally fine Beethoven Clarinet Trio featuring Matthews, Reginald Kell and Anthony Pini.  But I present here a trio of single 78-rpm records, each featuring a solo piano work by a member of the First Viennese School:

Denis Matthews, along with Myra Hess, Louis Kentner and Frank Merrick, made pioneering recordings of the piano music of John Field.  Last summer, just before starting this blog, I transferred his record of two John Field nocturnes; this is still available, and I have just added FLAC files as well:

At the same time I made available a "John Field Suite" orchestrated by Sir Hamilton Harty, one of whose movements is the same "Midi" Rondo that Matthews recorded.  This is also still available, as are new FLAC files: