Early Schubert by the Guilet Quartet 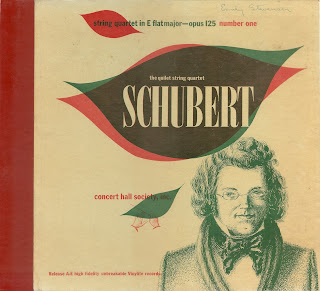 Back in November, Squirrel's Nest gave us a transfer of the first recording of Bartók's Fourth String Quartet played by the Guilet String Quartet for a Concert Hall limited edition release of 1946.  A year later, the same ensemble and label, in a general release this time, offered the early Schubert quartet which I present here, a recording mentioned in TIME Magazine's May 26, 1947 issue.  The article mentions Schubert's being 20 years old when he wrote it, but it's now believed he was actually 16, and that this is the last of five quartets Schubert wrote in 1813.  Whatever its genesis, it's a charming work well played by the Guilet ensemble: