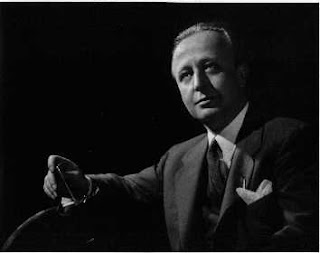 Here's a delightful recording conducted by the all-but-forgotten Howard Barlow (1892-1972), a broadcasting pioneer and champion of unusual repertoire (you can find a nice appreciation of his legacy here).  This is of Gordon Jacob's orchestration of Vaughan Williams' military band classic, the English Folk Song Suite (1923).  In 1940, when this recording was issued, this may well have seemed unusual repertoire, and indeed it appears to be the first (and, in the 78-rpm era, only) recording of the 1924 Jacob orchestration, which has since become standard.

Of course, for me, a good excuse to listen to any Barlow-Columbia Symphony recording is to hear the beautiful oboe playing of Mitch Miller, and here he doesn't disappoint - just listen to that oboe solo at the beginning of the second movement!

This recording was also issued, naturally enough, in England, and was reviewed in the September 1940 issue of The Gramophone.  The recording was still listed in the 1954-55 UK Columbia Catalogue, though it was slated for deletion with that issue. 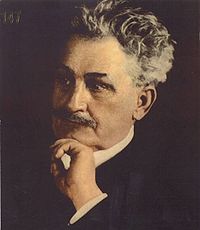 Here is the first recording of the last major work by Leoš Janáček, his String Quartet No. 2 of 1928 (subtitled "Confidential Letters" on the record labels, though nowadays more commonly translated as "Intimate Letters").  The quartet, like many of the works of Janáček's last ten years, was inspired by his unrequited love for Kamila Stösslová, a married woman 38 years his junior, and its title was Janáček's own.  It is played in this recording by the Černý Quartet, which was really the Prague String Quartet - however, the recording was made during the Nazi occupation of Czechoslovakia, and the Nazis forbade "nationalistic" names for native organizations, so the ensemble became known after its violist, Ladislav Černý (1891-1975).  The other players were Alexander Plocik and Herbert Berger, violins; the cellist was either Iwan Vectomov or Josef Simandl. 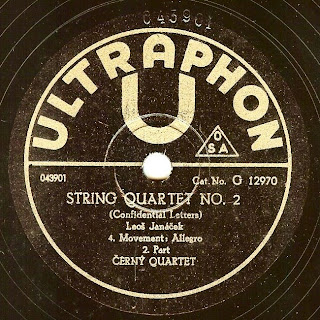 About two years ago I posted an earlier Prague String Quartet recording, which I have re-uploaded:

As you all can see, I am back after my hiatus with the Bach Brandenburg. It went reasonably well, despite the fact that a string broke on my harpsichord just minutes before the concert, as I was tuning it. I don't think I'll be playing the harpsichord again any time soon. Temperamental beasts, they are. I've even changed my picture on this blog from one of me playing the harpsichord to one of me as I looked when I began seriously collecting 78-rpm records. I love the Brandenburg #5 and would gladly play it again, but the next time it will be on a modern piano. After all, if Cortot, Serkin, Lukas Foss and Murray Perahia could play it, beautifully, on the piano, why can't I? Their recordings, especially Cortot's, blow all the harpsichord recordings of the piece out of the water. If only Artur Schnabel had recorded it! - it was in his repertoire.
Posted by Bryan at 1:48 PM 7 comments:

Sanromá and the Boston Pops 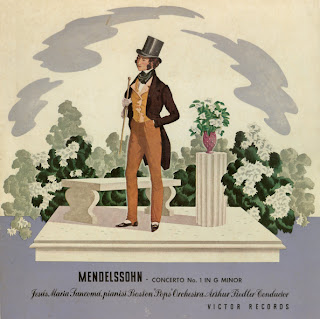 Puerto Rico-born Jesús Maria Sanromá (1902-1984) was for 20 years the official pianist of the Boston Symphony Orchestra.  While in this capacity, he recorded six concerted works for piano and orchestra with the Boston Pops under Arthur Fiedler, one each year between 1935 and 1940.  This is the offering from 1938, the Mendelssohn Piano Concerto No. 1 in G minor, taken from a slightly worn copy of Victor set AM-780.  The concerto takes 5 sides of the three records; on the last side is a solo recording by Sanromá of two of Mendelssohn's "Songs Without Words":

This might be my last post for a couple of weeks, as I have been asked to perform the solo harpsichord part of Bach's Brandenburg Concerto No. 5 with a local community orchestra on Oct. 24, and preparing this will be taking up most of my free time between now and then.  So to tide everybody over, here are links to all the Arthur Fiedler-Boston Pops recordings I had transferred and posted previously to RMCR, one of them another of the Sanromá piano concertos:

And, one with the Fiedler Sinfonietta (a chamber orchestra composed of Boston Symphony players); 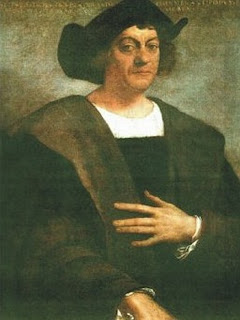 Columbus Day weekend is here, and to celebrate, a weird tribute to the great explorer from a musical explorer, the Mexican Julián Carrillo (1875-1965).  This is the "Preludio a Cristobal Colón" (1922), his first work to employ the principles of the 13th Sound, his system of dividing the octave into smaller intervals than the 12 half-tones normally found in Western music (hence, the "13th" sound - beyond 12 - get it?).  If you think of the note "C" on the piano, a white key, and the black key beside it, "C-sharp", and then imagine seven more notes between these two (corresponding to quarter, eighth, and sixteenth-tones), you will get an idea how Carrillo's system works.

Despite its apparent complexity, the system actually produced some quite listenable, if strange-sounding, music.  This "Preludio," scored for wordless soprano and 5 instruments, ends up being a rather lugubrious piece with an E-Flat-minorish feel, its mournful quality probably not surprising when you consider the ill effects of European settlements, as begun by Columbus, on Native American populations, of which Carrillo was a descendant. 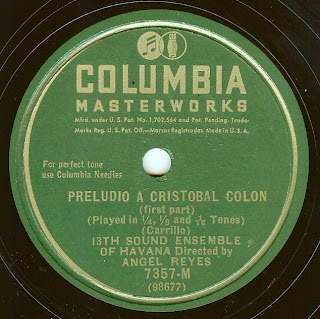 This record stayed in the Columbia catalogue for about 20 years, and was frequently cited in reference works of the time as an example of the most experimental music available on records.  David Hall, in his 1948 "Record Book," described the "resulting sounds as...not unlike those one hears from insect life in a field on a hot summer afternoon."

Exactly one other recording existed in the Columbia catalogue of a piece that employed microtones - a movement of a Duo for two violins by Czech composer Alois Hába (1893-1973).  It was to be found as the last item in the Columbia History of Music, Vol. 5, dealing with 20th-century music, which roughly ordered its 16 selections from the most musically conservative to the most far-out.  The Hába piece was placed even after a piece by Varèse!  Two years ago I transferred this entire volume of the Columbia History, which has been newly uploaded here: 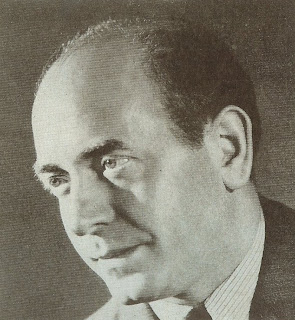 This week I present two recordings of symphonies from the earliest part of Eugene Ormandy's 44-year long career as conductor of the Philadelphia Orchestra (a post he held from 1936 to 1980).   First is Schumann's Second Symphony in a dynamic, virile reading which makes one regret that Ormandy never did a Schumann cycle - the only other Schumann symphony he recorded was No. 4, with the Minneapolis Symphony in 1934 (a recording I haven't heard).  This version of No. 2 was made during Ormandy's first two recording sessions with the orchestra:

The other work is a comparative rarity: the First Symphony of Colorado-born Harl McDonald (1899-1955), entitled "The Santa Fé Trail."  It's picture-postcard music with a slightly Impressionistic hue; not great music, perhaps, but fun and well-made, and superbly played by the "Fabulous Philadelphians" in a recording made in 1940:

McDonald, at the time this and other recordings of his orchestral works were made, was the business manager of the Philadelphia Orchestra.  This prompted Irving Kolodin, in his 1950 "New Guide to Recorded Music," to comment rather sarcastically on the "subtlety in the art of perpetuating one's writings that hadn't occurred to such men as Copland, Barber, or Piston."
Posted by Bryan at 11:20 PM 12 comments: