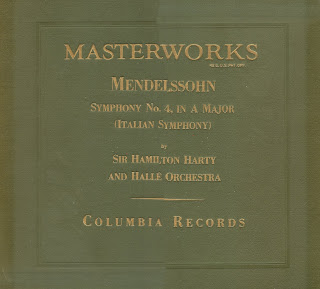 This week, I present one of the last major recordings made by the Hallé Orchestra under the man who guided its musical fortunes for 13 years (from 1920 to 1933), the great Sir Hamilton Harty (1879-1941). This is their 1931 recording of Mendelssohn's "Italian" Symphony, an endearing reading full of vivacity and authentic string portamenti, in a splendid early Columbia "Vivatonal" pressing I was lucky enough to find recently:

Included with the download is the original 16-page booklet of program notes, which even includes a listing of all Columbia Masterworks sets available up through the time of this release at the end of 1931. It reveals that even at this late date, no less than fourteen of Columbia's earliest acoustical sets were still available for sale.
Posted by Bryan at 1:55 PM 4 comments: 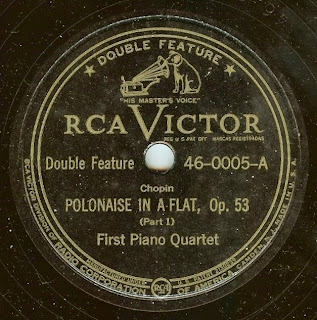 I'm revisiting the reclaimed record pile this week, with the first three issued recordings by the First Piano Quartet (Vladimir Padwa, Frank Mittler, Adam Garner, Edward Edson). Initially all three were issued in Victor's "Double Feature" series, a semi-classical line priced 25 cents lower than the Red Seal series. The 1948 RCA Victor Catalog describes these as having teal labels; however, as can be clearly seen, my copy of one of them has an ordinary black label. My guess is that they replaced the teal labels with black ones as being cheaper to produce. In any event, all three issues were subsequently upgraded to Red Seal status a year later, the form in which I have the other two (in somewhat battered copies, I'm afraid):

The Paganini Variations were the group's radio theme signature, according to the label, which also bears the cryptic composer credit "Paganini-Garner-Edson-Mittler-Padwa" - it is of course the same theme that also inspired Brahms, Rachmaninoff, Lutoslawski and so many others for variations.
Posted by Bryan at 12:16 PM 2 comments:

This week, an album by that indefatigable purveyor of unusual and little-known music on record, Howard Barlow (1892-1972), who, with his Columbia Broadcasting Symphony, was responsible for a number of recorded premières, including this one.  Actually, four-fifths of one, because another Howard - Hanson - beat Barlow to the punch by four days in recording the fourth of the five movements of this MacDowell Suite (the "Dirge") as part of his first Victor album of American music, which didn't actually hit the stores until after the present recording did:

The simple but appealing cover design shown above is original to the set, which is a nice early pressing.  I'm pretty sure it predates Alex Steinweiss' design work for Columbia, and there were a few other sets from the same time period (middle to late 1939) that featured a composer's silhouette, as this one does.  Later copies of this MacDowell set that I've seen use an ordinary generic cover.
Posted by Bryan at 10:17 PM 8 comments:

The Hungarian pianist Andor Földes (1913-1992) studied under the two towering musical figures of his time and place - Ernst von Dohnányi and Béla Bartók, and in fact became best known for his performances of the latter composer's works. He came to America around 1940, and would first have become known to American record-buyers through his role as accompanist to another compatriot, violinist Joseph Szigeti, in a series of prewar Columbia recordings, most notably sonatas by Schubert and Debussy. In 1947, Földes gave the New York première of Bartók's Second Concerto, and made the first recording of it two years later, in France:

These French Polydor pressings, though looking lovely, turned out to be quite noisy. I did what I could with them with several different styli, but some sides still have an audible swish and in fact the right channel turned out to be unusable. Despite this, I still think it sounds better than the Vox LP which was the recording's only issue in the USA.
Posted by Bryan at 10:29 AM 4 comments: