I've featured several recordings in the past by the British duo-piano team of Ethel Bartlett (1896-1978) and Rae Robertson (1893-1956), and here's another: the original piano duo version of Brahms' wonderful Variations on the St. Anthony Chorale, previously attributed to Haydn but more likely, according to the latest scholarship, to be by Haydn's pupil Ignaz Pleyel.  Of course, several recordings of the orchestral version had achieved wide currency when this recording was issued late in 1940, including ones by Toscanini and Weingartner, but this appears to be the first-issued recording of the piano duo.  (A year after this recording appeared, a version by Pierre Luboshutz and Genia Nemenoff was issued by Victor, but since I don't have access to Victor's recording dates, I have no way of knowing which was actually recorded first.)

Sadly, Bartlett and Robertson's recording career was not as extensive as artists of their caliber would warrant.  It began with several NGS recordings of works by Arnold Bax in the late 1920s, continued in the 30s with a dozen or so sides for HMV, and when they moved to the USA in the late 30s they signed with Columbia, where they recorded 32 issued sides before Vronsky and Babin, who had been at Victor, displaced them as the reigning piano duo.  In the early 50s, they made several LPs for MGM, which are so obscure that I knew nothing of them until researching for this post!  They included a second recording of the Brahms Haydn Variations and their only recordings of works by Stravinsky.
Posted by Bryan at 12:20 AM 5 comments: 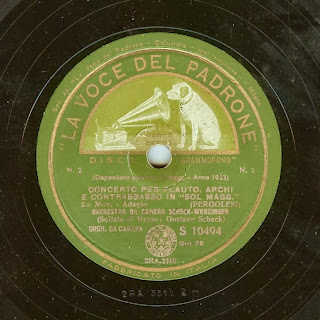 The Swiss cellist and viola da gamba player August Wenzinger (1905-1996), a student of Feuermann, was one of the 20th century pioneers of historically-informed performances of Baroque music, both through his performances on the gamba and his participation in various orchestras, principally that of the Schola Cantorum Basiliensis and the Capella Coloniensis.  He gained fame in the 1950s through directing these groups.  But he was active long before this in exploring Baroque music; he was one of the gamba players on the Busch Chamber Players' recording of the Bach Brandenburg Concerto No. 6 in 1935, and in 1930, with a like-minded colleague, the flutist Gustav Scheck (1901-1984), he co-founded a Baroque ensemble, Kammermusikkreis Scheck-Wenzinger.  This group made a handful of recordings in the late 1930s for Electrola, including this one featuring Scheck (his first name Italianized on this pressing as "Gustavo"!) as a soloist in a flute concerto attributed to Pergolesi - although most scholars seem fairly certain that it isn't actually his:

There are a couple of interesting aspects about this recording.  One is that, when played at 78-rpm, the instruments appear to be tuned at A = 415 Hz, the current standard for what is called "low pitch" used by period-instrument ensembles!  Surely this is one of the earliest examples of this on a recording (outside, perhaps, of the various Dolmetsch family recordings).  The other is the sound of Scheck's flute: the tone is much closer to a recorder than to a modern metal flute, and I'm wondering whether he actually used an early flute for this recording.  He was known for his interest in the Baroque flute; Hans-Martin Linde, also a specialist in this field, is Scheck's most famous student.
Posted by Bryan at 12:46 PM 9 comments:

The Hungarian String Quartet, led by Bartók's friend Zoltán Szekely from 1937 to 1972, probably needs no introduction in playing the string quartets of their great compatriot, but perhaps this particular recording does.  The group's benchmark recordings of the Bartók quartets, for Deutsche Grammophon, were made in 1962, by which time the lineup pictured above had changed in both the second violin and cello chairs, so that the two recordings they made in the late 40s of Bartók's last two quartets (the other, No. 5, can be heard at the CHARM website) present a substantially different group:

(See the comments section for additional links, if those above give trouble.)

I obtained this set about six years ago, and made my transfer shortly thereafter, but have never put it up till now, because one of the records is cracked.  (I was, however, able to obtain the set for free, for that reason.)  The crack is from the center outwards, and is barely visible, but it is all too audible, I'm sorry to say, and affects about the last minute of the first movement and about a minute and a half in the middle of the last movement.  Nothing ClickRepair was able to do, or that I could do manually, could eliminate everything, although I managed to tame some of the more egregious thumps during quiet passages.  I present the recording anyway, because in the intervening years, no one else has come forward with it, to my knowledge, and it's too important to ignore.

Bartók's Sixth String Quartet, that brooding masterpiece haunted by the specter of upcoming war, was exceptionally well served during the 78 era, receiving no less than three recordings (four if you count the Juilliard Quartet's Columbia versions of all the Bartók quartets, which appeared simultaneously on LP and 78) - more than any other Bartók quartet.  The first was in 1946, by the Gertler Quartet on English Decca, a recording that can also be heard at the CHARM website, the second was this one by the Hungarian Quartet, and the third followed only a month later by the Erling Bloch Quartet for Danish HMV.  Here is a chronology of 78-rpm recordings of the Bartók quartets:

Then in 1949 the Juilliard Quartet made their groundbreaking first set, which, in the opinion of most reviewers at the time, blew all the existing versions out of the water.
Posted by Bryan at 1:46 PM 6 comments:

Hindemith, Schoenberg and Stravinsky for Band

As I mentioned earlier, I spent much of the summer enjoying the fruits of the new Mercury Living Presence CD box, and gained thereby an idea or two for future transfers.  Well, here's one of them realized.  The box contained nine discs conducted by Frederick Fennell (1914-2004), who, arguably, did more to raise awareness of the serious literature for wind band than anyone else (much as his colleague at the Eastman School of Music, Howard Hanson, did for American music).  Included among Fennell's recordings in the series of Mercury CD reissues of the 1990s (from which the box set were derived) are fine works for band by the likes of Holst, Vaughan Williams, Grainger, Khatchaturian, Milhaud, Persichetti and Morton Gould, but inexplicably ignored was this issue:

In the case of the Schoenberg work (which also exists in a version for full orchestra, Op. 43b), this was a first recording.
Posted by Bryan at 2:19 PM 6 comments: