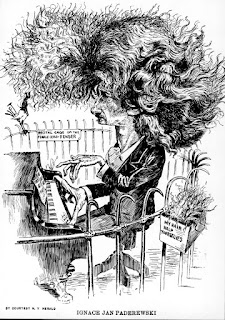 As I've mentioned elsewhere, Puerto Rican-born Jesús Maria Sanromá (1902-1984) was the official pianist of the Boston Symphony and Boston Pops orchestras for over 20 years, and while there, made several recordings of piano concertos with them, including the first complete recording of Gershwin's Rhapsody in Blue, and concertos by Mendelssohn and MacDowell. Perhaps the rarest collaboration is this one of Paderewski's youthful A Minor Concerto of 1888, not only a first recording of the piece, but seemingly the first recording of any work by Paderewski requiring more than two 78-rpm sides:

The Paderewski concerto may not be an earth-shattering masterpiece, but it is great fun, and Sanromá plays it for all it is worth. (The piece, incidentally, was tapped for the very first issue in Hyperion Records' acclaimed series "The Romantic Piano Concerto".) Paderewski played it at his American debut in 1891, and that wildly successful American tour quickly became a media circus, giving rise to such cartoons as the one shown above.
Posted by Bryan at 12:08 PM 2 comments:

This Saturday, September 26, marks the birth anniversary of the great Alsatian conductor Charles Munch (1891-1968), and so I present the first recording he made in America, in 1947, not with the Boston Symphony (that appointment was to come two years later) but with the New York Philharmonic. It's also the second-only recording made anywhere of Saint-Saëns' "Organ" Symphony (after Piero Coppola's 1930 version for French HMV) - perhaps understandably, it wasn't until the stereo era that the piece became the vehicle for high-powered collaborations between famous organists and conductors that it is now:

Edouard Nies-Berger (1903-2002), born in Munch's hometown of Strasbourg, was a protegé of Albert Schweitzer. He came to the USA in 1922 and was the official organist of the New York Philharmonic at the time this recording was made. Shamefully, Columbia did not even bother to identify his first name, billing him on the cover and labels as "E. Nies-Berger." But that was more information than they gave about the pianist, who was completely uncredited. James North, in his Philharmonic discography, says that Walter Hendl (1917-2007), then the assistant conductor of the orchestra, fulfilled this role.
Posted by Bryan at 7:54 PM 8 comments: 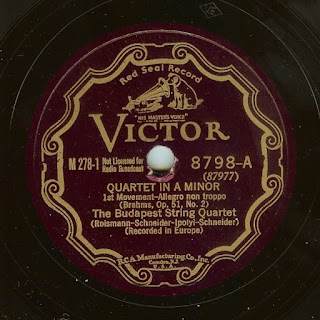 Another gem from the 1935 incarnation of the Budapest Quartet this week, recorded at the same sessions that produced this Mendelssohn recording I uploaded some weeks ago.  This is not one of the works that made it into the Odyssey LP boxes that were discussed in comments to that post, though it did make it into a Biddulph CD set of the Budapest Quartet's Brahms recordings that appeared about 20 years ago - which, I imagine, is long out-of-print as well. 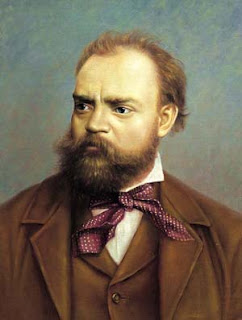 Tuesday marks the 174th anniversary of the birth of Antonín Dvořák (1841-1904). I guess that means I'm a year ahead of celebrating a nice round number (175th), but so what? - any excuse to listen to Dvořák's music seems a good one to me. And so here is his Cello Concerto, one of the works composed in America, and suffused with nostalgia and homesickness. Of course, almost every cellist of note has recorded it, and most of these recordings that I've heard fall short of the ideal interpretation. It requires a performance of total emotional commitment, while at the same time avoiding sentimentality, and that's a fine line indeed! I think this version by Piatigorsky, himself a lifelong exile, comes as close as any I've heard (naturally, it doesn't hurt to have the support of Ormandy and his great orchestra):

This cover design of this set affords another excuse to add to my ongoing Alex Steinweiss gallery: 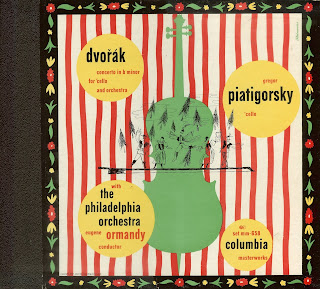