Loeffler: Partita for Violin and Piano

81 years and one week ago today, May 19, 1935, the Alsatian-born American composer Charles Martin Loeffler died in Medford, Massachusetts, at the age of 74. Two and a half weeks later, Odessa-born violinist Jacques Gordon (1899-1948) began recording one of Loeffler's last works, his four-movement Partita of 1930, an unaccountably neglected work of which I can trace no subsequent recording. Gordon's partner in this undertaking was Lee Pattison (1890-1966), better known as one-half of the Maier and Pattison piano duo that was popular during the 1920s. The set was issued by Columbia late in 1936 or early in 1937, and is quite rare, because it was deleted from the catalogue upon CBS's takeover of Columbia in 1939:

The movements of Loeffler's Partita, dedicated to Elizabeth Sprague Coolidge, are an Intrada, loosely in the form of a Baroque ouverture à la française, a Sarabande (by Mathieson) with 5 variations, a Divertissement with echoes of tango and ragtime (!), and a Finale des tendres Adieux whose opening reminds me strongly of the last movement of Brahms' first violin sonata, though the musical language is nothing like Brahms.

This recording appears to be Jacques Gordon's only one of a large-scale work for violin and piano. He was much more active in the recording studios as a quartet leader. The Gordon String Quartet made some dozen recordings for Columbia, Schirmer, and Concert Hall; for the last-named label they recorded William Schuman's Third Quartet.
Posted by Bryan at 3:12 PM 9 comments: 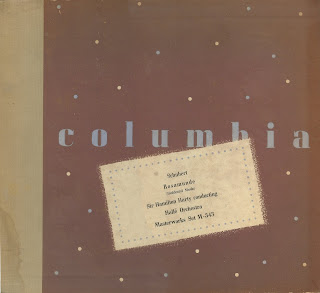 The great Sir Hamilton Harty (1879-1941) contributed to Columbia's centennial celebrations of both Beethoven and Schubert in 1927-28 with major recordings of works then new to Columbia's catalogue. Of Beethoven he recorded the Fourth Symphony, and of Schubert the "Great C Major." Both of these have been professionally restored by Mark Obert-Thorn, working for Pristine Classical, but I am unaware of any reissue of Harty's other Schubert Centennial recording, this set of excerpts from "Rosamunde":

This set has a curious issue history. It didn't appear in the USA until 1938, and then with a different overture than the one in the 1928 British issue. There are two overtures associated with "Rosamunde" (Schubert not having written one specifically for the Helmina von Chézy play), the other one being that for "Alfonso and Estrella" - and Harty recorded both, the latter one on the same day as the incidental music. Both overtures were, in fact, issued as single records by American Columbia before this set appeared.
Posted by Bryan at 3:42 PM 10 comments:

This week I present Eugene Ormandy's first recording of the Hindemith work that he recorded more than any other (three times, in 1940, 1952 and 1962) - the celebrated symphony extracted from the 1934 opera Mathis der Maler, its movements inspired by three of the panels that Matthias Grünewald contributed to the Isenheim Altarpiece 500 years ago. For all intents and purposes, this recording represented the general American record-buyer's introduction to this piece; an earlier one had been made by Telefunken in 1934, with Hindemith himself conducting the Berlin Philharmonic (his conducting debut on records), but one imagines that it did not receive much currency at the time because of Hindemith's position as persona non grata with the Nazi regime. In any case, the Telefunken set didn't receive widespread distribution in the USA until 1949, when Capitol repressed it in its new Captol-Telefunken series. Meanwhile, Ormandy's version had appeared on the US market seven years previously:

The same session also produced this recording of a symphony by Harl McDonald, in addition to works by Sibelius, Barber and three sides featuring soprano Dorothy Maynor - 23 sides in all! It was to be Ormandy's only Philadelphia session in the 1940-41 season not shared with another conductor, so he must have been inclined to make the most of it. (Stokowski's last two regular Philadelphia sessions, incidentally, occurred in December that season. The first of these produced the world première recording of Shostakovich's Sixth Symphony.)
Posted by Bryan at 11:02 AM 6 comments: 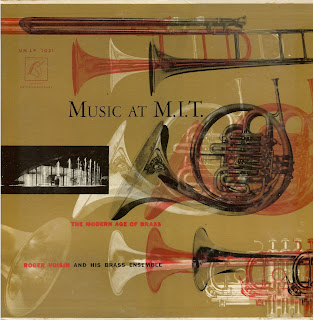 A couple of months ago, I was researching old Schwann catalogues to try and discover the deletion date of this LP by the New Art Wind Quintet, Since a work by Nicolai Berezowsky was the guiding force behind my posting that recording, I searched under Berezowsky's name in the Schwanns that I have from the late 50s, and found that there was one other LP available with his music, a brass piece coupled with music by Dahl, Hindemith and somebody else unknown to me. I saw this several times before I realized, "hold on, I think I may have that LP!" I checked my collection and sure enough, there was a copy, which I had found some 30 years ago when I wanted to hear the Dahl piece. I had learned that its second movement was the theme for WQXR's long-running radio program "Music at First Hearing" - on which a panel of well-known music critics like Irving Kolodin, Martin Bookspan and others reviewed new record releases on the spot without advance knowledge of what they were, a sort of "What's My Line" for record collectors. Here is the LP in question:

Roger Voisin (1918-2008) was the principal trumpeter of the Boston Symphony from 1950 to 1966, and he leads an ensemble of fellow BSO members on this recording, made for an independent Boston label called Unicorn Records (not to be confused with the much better-known British label of the same name from two decades later). The label, whose recordings were produced by Peter Bartók, the composer's son, lasted only two or three years before being subsumed by Kapp Records in 1958.  Kapp kept most of Voisin's Unicorn records in its own catalogue through the 1960s, including this one.
Posted by Bryan at 3:48 PM 7 comments: