Today I present an early recording of a Bruckner Mass, sung by the Aachen Cathedral Choir under its Domkapellmeister, Theodor Bernhard Rehmann (1895-1963).  This is the last of Bruckner's three masses (although published as the second), the Mass in E minor, and the only one to receive recordings during the 78-rpm era, doubtless because its smaller scale - it is accompanied only by wind and brass instruments - enhanced its feasibility for recording.  The work, in fact, was recorded three times in the 1930s: first for the obscure Christschall label, an Austrian company specializing in religious music, by the Liebfrauen Church in Zürich; and last by the Hamburg State Opera Chorus under Max Thurn, for Telefunken (released in the USA by Capitol), in the summer of 1938.  Between them came the present recording, for Electrola:

The Chilean pianist Claudio Arrau (1903-1991) left a vast recorded repertoire (a complete discography can be found here).  However, the portion of it dating from the 78-rpm era is quite meager, and it really only got underway when Arrau moved to New York in 1941 and began recording for Victor.  His output for Victor was not large (only five sets, plus a fascinating account of Bach's "Goldberg Variations" that didn't get released until 1988), but it featured large-scale works for the first time in his recording career.  The first recording he made for Victor was of this Weber sonata, a work he did not record again:

A PDF file, reproducing the original booklet for Set M-884, is included with the download.
Posted by Bryan at 9:17 AM 3 comments:

Arguably, two of the most groundbreaking shows in the history of the American musical theatre are Showboat (by Jerome Kern and Oscar Hammerstein II) and Porgy and Bess (by Gershwin).  And two transplanted American conductors, Artur Rodzinski and Fritz Reiner, recognized their genius and sought to give these works greater permanence by "elevating" them to symphonic form (remember, Porgy was considered a musical rather than an opera in those days).  Rodzinski commissioned Kern to create a "scenario for orchestra" out of Showboat, and Reiner commissioned Robert Russell Bennett (since Gershwin himself was no longer alive to do it) to create a "symphonic picture" out of Porgy and Bess.  Here are the results, conducted by their instigators:

Once again I am indebted to Ken Halperin of Collecting Record Covers for sending me these sets.  The Showboat recording was apparently never reissued by Columbia on LP, and the Porgy only as a ten-incher, as part of Columbia's initial launch of LP in 1948.
Posted by Bryan at 8:31 PM 8 comments:


Eugene Ormandy had a natural affinity for 20th-century music, and he also had an affinity for Russian music.  When the two intersected, as in the works of Prokofiev and Shostakovich, the results were usually memorable.  Here are two recordings of major Prokofiev scores, in each case a first recording:

A Gallery of Steinweiss Covers: Postscript

About a year ago, I was posting on this blog a series of album covers by the great illustrator, the late Alex Steinweiss, who passed away last July, aged 94.  Well, four more sets featuring his designs came in the mail just yesterday, courtesy of Larry Woodlee at Vinyl Rehab, and so I post them here.  The first three of these date from 1946, and the last from 1947: 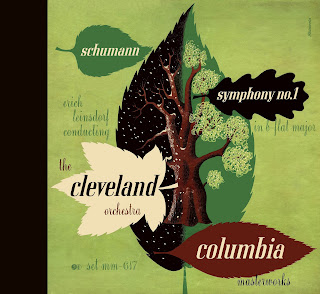 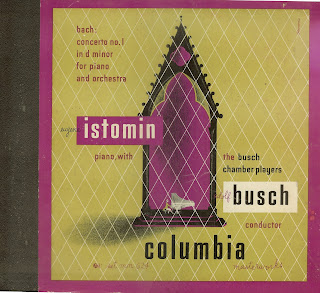 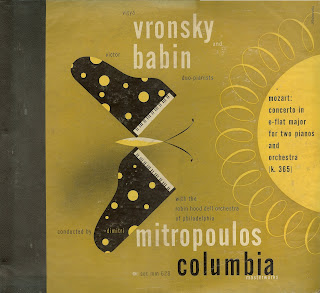 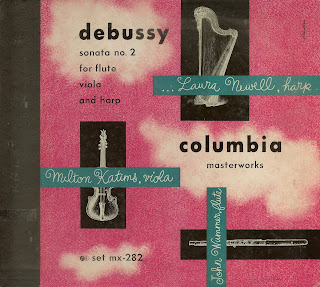 The Schumann cover was slightly disfigured by a sticker and a couple of address stamps of its previous owner, Aquinas College in Nashville, Tennessee; and so, my heartfelt thanks go to Peter Joelson for his work on restoring this image.

I'll be back with some more Ormandy uploads in my next post - stay tuned!
Posted by Bryan at 2:00 PM 1 comment: