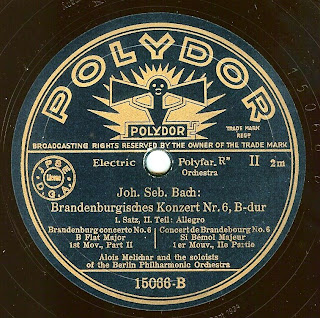 This week I present something quite special: it's the earliest recording known to me of any of Bach's Brandenburg Concertos where each part is taken by a single player.  This is the norm nowadays, especially in Concertos Nos. 3 and 6, but until about the 1960s it was quite rare (more often, they were played with full symphonic-sized string sections!).  The players are Reinhard Wolf and Kurt Oberländer, violas; Paul and Sylvia Grümmer, viole da gamba; Wolfram Kleber, cello; Hermann Menzel, double bass; and Eta Harich-Schneider, harpsichord.  They are billed collectively as "Soloists of the Berlin Philharmonic" on the label, pictured above, and are conducted by Alois Melichar (1896-1976).

My thanks go to Tully Potter for providing the names of the individual players.  Mr. Potter's name is well-known to those of us who collect historical string recordings on CD, as he has contributed many program notes for these; and he has lately published a wonderful biography of Adolf Busch which anyone interested in great music-making in the first half of the 20th century should check out.  Busch was responsible, incidentally, for the second-ever one-to-a-part Brandenburg - his splendid version of No. 3, made two years after this Melichar No. 6 recording, which is readily available on CD, from EMI, Pearl and other labels.
Posted by Bryan at 12:51 PM 9 comments: 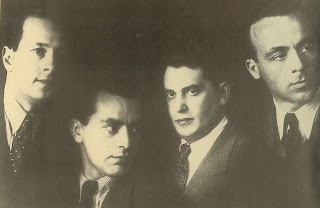 A string quartet with a Hungarian name, consisting of four Russians playing the music of a Czech composed in America - what could be more international than that?  Here is the great Budapest String Quartet with its classic lineup of Joseph Roisman and Alexander Schneider (violins), Boris Kroyt (viola) and Mischa Schneider (cello), pictured above in that order in 1940.  Here they play Dvořák's "American" Quartet in a 1940 recording, one of their last for RCA Victor before they jumped ship and moved to Columbia where they remained for the rest of their career (until 1967; in all fairness, Columbia promoted the ensemble far more extensively than RCA ever did).  This was once available on a Biddulph CD but this is now long out-of-print.  Here's a nice Frank Decker cover from my copy of the 78 set, one of the most attractive of the generic designs RCA used for its album covers in the late 1940s: 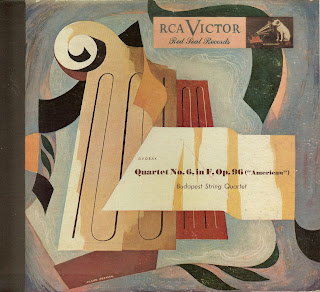 Back in 2008, I transferred another great Dvořák recording by the Budapest Quartet with assisting artists, of the String Sextet; this is still available, and I have just made new FLAC files of this recording as well: 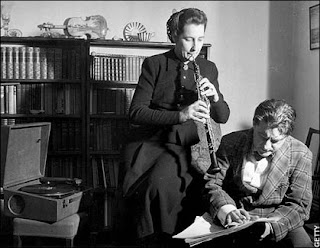 Monday will mark the 100th anniversary of the birth of Evelyn Rothwell, latterly known as Lady Barbirolli (1911-2008), oboist (a student of Leon Goossens, with whom she shared a wonderfully expressive way of playing the instrument) and the wife of conductor Sir John Barbirolli.  They are both pictured above, in a photograph accompanying the Daily Telegraph's obituary of her, which can be read here; she died only three years ago, one day after her 97th birthday.  To celebrate her birthday, I present the first two recordings she made in collaboration with her husband, both oboe concertos arranged by him from works in other media by Corelli and Pergolesi.  (Actually, all but one of the movements of the Pergolesi arrangement are now thought to be by other composers.)  Here are the details:

The sources for both works are spelled out in text files accompanying the recordings.

The Barbirollis' third recorded collaboration, a 2-disc set of the Mozart Oboe Concerto from December, 1948, can be heard at the CHARM website.
Posted by Bryan at 12:49 PM 1 comment:

Schubert as Finished by Ernst Křenek 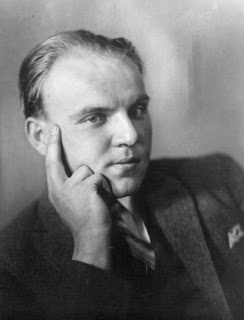 This week I present one of Schubert's finest unfinished works, the Piano Sonata in C major, D. 840.  He left only the first two movements completed, with two others in fragmentary form.  Most pianists are content to play just the two completed movements, but not Eduard Erdmann - some of whose recordings Satyr has been giving us lately.  In 1921, Erdmann asked Ernst Křenek (1900-1991) to complete the sonata for him.  Křenek (pictured above as a young man) obliged, and his version was published in 1923.  It's a fine one which is all but forgotten today, and it appears to have been recorded only twice.  In the 1950s it was included as part of Friedrich Wührer's traversal of Schubert's piano sonatas in three Vox Boxes, but before that it had been recorded by Ray Lev for the Concert Hall Society in its subscription series.  It is this version which I present here:

Ray Lev (1912-1968) was an unfortunate figure among American pianists; in 1950 she was identified as a Communist sympathizer by the "Red Channels" report naming 151 alleged Communists in the entertainment industry.  This effectively ended her career and a comment on one blog that I've seen actually speculates that she committed suicide (she died on my fifth birthday, May 20, 1968) - see here.  The excellent Wikipedia article about her, written by my friend and fellow record collector David Hoehl, can be found here.  Her recording of the Schubert C Major Sonata is excellent but may not be to all tastes; it's considerably more brisk than Wührer's or any others that I've heard (Kempff, Richter).
Posted by Bryan at 9:10 PM 1 comment: 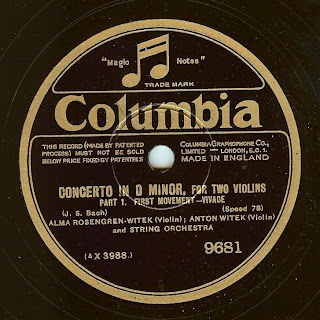 Today I present an early recording of the Bach Double Concerto by a husband-and-wife team that I can find very little information about, Anton Witek and Alma Rosengren-Witek.  He was principal violinist of the Boston Symphony from 1910 to 1918, and most of what I can find out about him online is because of this, since http://www.stokowski.org/ has a page devoted to principal players of the Boston Symphony with a paragraph of information about him here (you'll need to scroll down the page to find it, and it's a big page!). From an article in the New York Times dated May 8, 1926, a preview of which is available here, we learn that Alma Rosengren of Lindsborg, Kansas, had been his pupil before marrying him.  If anyone out there has any further information about these two, I'd love to hear it!  Meanwhile, enjoy their forthright performance of the Bach Double Concerto, obviously made by Columbia to replace their 1924 acoustic recording by Arthur Catterall and John S. Bridge (with Hamilton Harty conducting) which was deleted at the same time this one was issued.  (This Catterall-Bridge recording can be heard at the CHARM website.)

UPDATE (Nov. 20, 2016): Thanks to the recent online accessibility of the Phonograph Monthly Review magazine (1926-1932), I have been able to find out considerably more about this recording, for the July, 1929, issue of that magazine contains a full page about it; apparently Herr Witek himself was interviewed for the article. It was made in the Bayreuth Festspielhaus during the 1928 summer season there, and apparently was the first time a work not by Wagner was played on that stage! The orchestra was composed of members of the Bayreuth Festival Orchestra, of which Witek himself was concertmaster, and they were conducted by Ernst Schmidt, also a violinist at Bayreuth, whose principal claim to fame was that he replaced Karl Muck as the Boston Symphony's conductor, finishing out the 1917-18 season when Muck was arrested and interred as an enemy alien.
Posted by Bryan at 6:13 PM 6 comments: 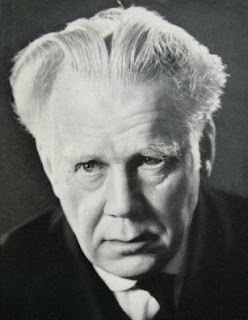 The piano playing of Edwin Fischer (1886-1960) has been widely documented in CD reissues, which is only right, considering that he was one of the greatest pianists of the 20th century.  (Alfred Brendel, who celebrated his 80th birthday this week, was one of his students.)  Less well known, however, is his work as a conductor.  He left a number of recordings of Bach and Mozart concerti, on which he conducted his own chamber orchestra from the piano, and these have been reissued widely. But he also left a few recordings of purely orchestral works, including this first recording of Mozart's Symphony No. 33 in B-Flat, K. 319:

and, in the same package:

With this post I am now offering a choice between FLAC or MP3 file formats.  Here are the links for this Fischer Chamber Orchestra package:

Interestingly enough, both orchestral sessions outlined above also were devoted to works for piano and orchestra: the Mozart symphony session in 1936 also produced a wonderful recording of Mozart's Rondo for piano and orchestra in D, K. 382, and the major work recorded at the 1933 session that produced the Bach Ricercar was the Bach D minor clavier concerto.
Posted by Bryan at 5:53 PM 8 comments: 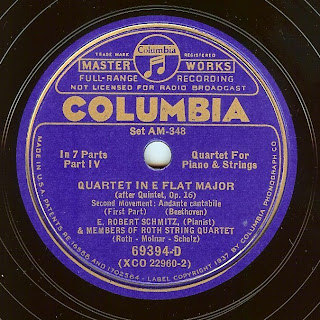 I realize that I have been neglecting chamber music lately, so for my first post of the new year I offer this recording of Beethoven's Piano Quartet in E-Flat, Op. 16 (the one that's arranged from a Quintet for piano and woodwinds).  It features the French pianist E. Robert Schmitz (1889-1949), better known as a Debussy specialist, with Feri Roth, Ferenc Molnar and Janos Scholz of the Roth String Quartet.  This was from the group's pre-1940 lineup; about that time, Roth reorganized the ensemble with three completely different players.  Both groups recorded extensively for Columbia from about 1934-42 and their discography includes works by Dohnányi, Roy Harris, and Roussel in additional to more standard Classical repertoire.  Six works played by them are available on the CHARM website; if you haven't explored this site's available sound files, you really owe it to yourself to do so - only, do so when you have plenty of time to spare!  Among the files there is the filler to this set, a Haydn minuet (from Op. 76, No. 5), which I didn't include in this download since my copy has a fairly noticeable lamination crack that would require a lot of work to tame.  Just search on "LX610" (the British issue of this filler) in the "Free text search" and it should come up.  Anyway, here are the details for my Beethoven download: