My exploration of Scandinavian music continues with a charming Serenade for orchestra by Wilhelm Stenhammar (1871-1927), the Swedish composer, conductor and pianist who cultivated friendships with his contemporaries Sibelius and Carl Nielsen. (The latter, in fact, found something of a haven at Gothenburg, where Stenhammar was artistic director of the orchestra, at a time when the Danish master was having certain troubles in his native country, and Stenhammar invited him over to conduct concerts.) Stenhammar, who wrote two symphonies, two piano concerti, and six string quartets, composed in a style more conservative than his more famous contemporaries, but nevertheless he was influenced strongly by them. This five-movement Serenade of 1913 breathes much of the same atmosphere as Sibelius, especially in its Valse triste-like second movement:

Heliodor Records was the budget arm of Deutsche Grammophon Gesellschaft, and had a much stronger presence in Europe than in the USA, where they were on sale, manufactured by MGM Records, for only two years, from 1967 until 1969. Many of their releases were culled from old MGM classical issues of the 1950s (and were, unfortunately, given the fake stereo treatment), but some, like this one, were from Deutsche Grammophon recordings not in the then-current classical series, which MGM had been distributing as direct imports since 1962 (having taken over from American Decca). This all stopped in 1969 when Polydor established an office in the USA to handle imports.
Posted by Bryan at 4:40 PM 5 comments:

Today I offer some of the most delectable flute playing you shall ever hear, by the great French flutist René LeRoy (1898-1985), a student of Adolphe Hennebains at the Paris Conservatoire (he subsequently studied with Philippe Gaubert).  Here he plays a charming Baroque sonata by Leonardo Vinci (1690-1730), a Neapolitan composer of operas apparently unrelated to the great painter and inventor with whom he shared a name:

I apologize in advance for the noisiness of this record - its previous owner must have shared my opinion of LeRoy's playing, for it is obviously a much-played copy.

UPDATE (July 26): Christopher Steward, a flutist and collector who maintains a wonderful page of early flute recordings, has very kindly sent me his own transfer from a much superior copy of Victor 18086, with permission to disseminate it, so I have substituted his transfer for mine in the links above.
Posted by Bryan at 7:55 PM 5 comments:

From the earliest days of the long-playing record as introduced by Columbia in 1948, three elements were present on all cover designs of the new records: the brand name "Columbia" (with "Masterworks" added for classical releases), the company's Magic Notes logo (introduced in 1908, and modified with the addition of a CBS microphone in 1939), and the new "Lp"-in-a-circle logo to identify the new records.  The placement of these elements may have varied from year to year but the presence of them was constant over the next six years.  Here is a cross-section of a typical example from 1954, with the Notes appearing to the left of the catalog number:

But by then, the Eye had been introduced in Columbia's advertising; in fact, it appears at the bottom of the back cover of this album:

By the beginning of 1955, the Notes have disappeared from the cover, as on this cross-section of an LP reviewed in the Feb. 5, 1955, issue of Billboard:

Beginning with issues reviewed in the March 12, 1955, issue of Billboard, a curious symbol appears underneath the "Lp" logo, resembling nothing so much as a tape reel:

This seems to be designed to assure the buyer that this is a "high fidelity" recording, a catchphrase that was all the rage in the 1950s.  Columbia must have decided that this assurance could be granted much less wordily by the summer of 1955, for by then the tape reel and its associated verbiage had been deleted, and the "Lp" logo reconfigured like this (snipped from the upper right corner of ML 5035): 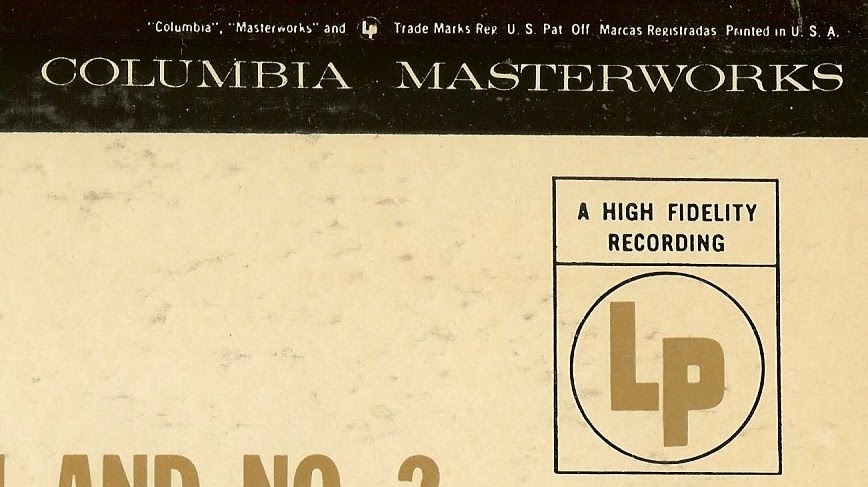 (Incidentally, this branding coincides with the introduction of the "6-eyes" label. I've seen copies of issues having "tape reel" covers with the old Magic Notes blue labels, but I've never seen the above branding with old labels, at least on American pressings.  Canadian pressings are another story.)

This simple, elegant branding lasted for almost a year.  With the releases of May, 1956, or thereabouts, the Eye finally appears on Columbia front covers, albeit in this curious configuration with the "Lp" logo forming its "pupil" and used in tandem with a similar eye-like device advertising "360 Sound" (a phrase first used in 1952 in connection with Columbia's phonograph line):

By the fall of 1956, the "360 Sound" part of this logo had morphed into this circles-within-squares arrangement:

...which is a bit confusing to behold, but at least has the virtue of contrast with the Eye portion of the logo.

The third version of this vertical logo, which first appeared around the beginning of 1957, is the simplest, for it dispenses with the "360 Sound" component and restores the "Lp" to its rightful place as a separate entity (I've included the fine-print portion underneath because it shows that the Eye has finally reached the status of Marcas Reg., i. e., a registered trademark):

This didn't last long either.  By the spring of 1957, the information contained in this last vertical version - the label name, the Eye, the "Lp" and Guaranteed High Fidelity - had been reworked into this easier-to-manage, (mostly) horizontal arrangement:

This was the definitive version, and would remain in place for the next four to five years, with minor variations.

Email ThisBlogThis!Share to TwitterShare to FacebookShare to Pinterest
Labels: Columbia

The Violinist Who Vanished

There have always been creative artists who reach a point in their careers and say, "Enough."  One thinks of Sibelius, who effectively quit composing 25 years before his long life ended, or of Glenn Gould, who at age 31 gave up public performances to concentrate on recording.  But the case of Patricia Travers (1927-2010) is perhaps the strangest of all.  (The catchy, alliterative title I have given this post didn't originate with me; it was borrowed from the New York Times obituary of Ms. Travers.)  Raised as a child prodigy, she concertized actively until the age of 23, when she decided to give it all up, shortly after making this recording:

That her retirement from public life was an incalculable loss to music is obvious from this recording, for both works receive passionate, committed performances - and it's ironic that one of the composers represented should be Ives, who, though still alive at the time, had not himself composed anything new for over twenty years.

Patricia Travers did make one more recording, in 1952, when she teamed with Norman Dello Joio, accompanying her at the piano for his "Variations and Capriccio" on one side of another Columbia LP (the other side featured works by Paul Bowles).  I am sorry to say I don't have that one.
Posted by Bryan at 11:08 AM 6 comments: 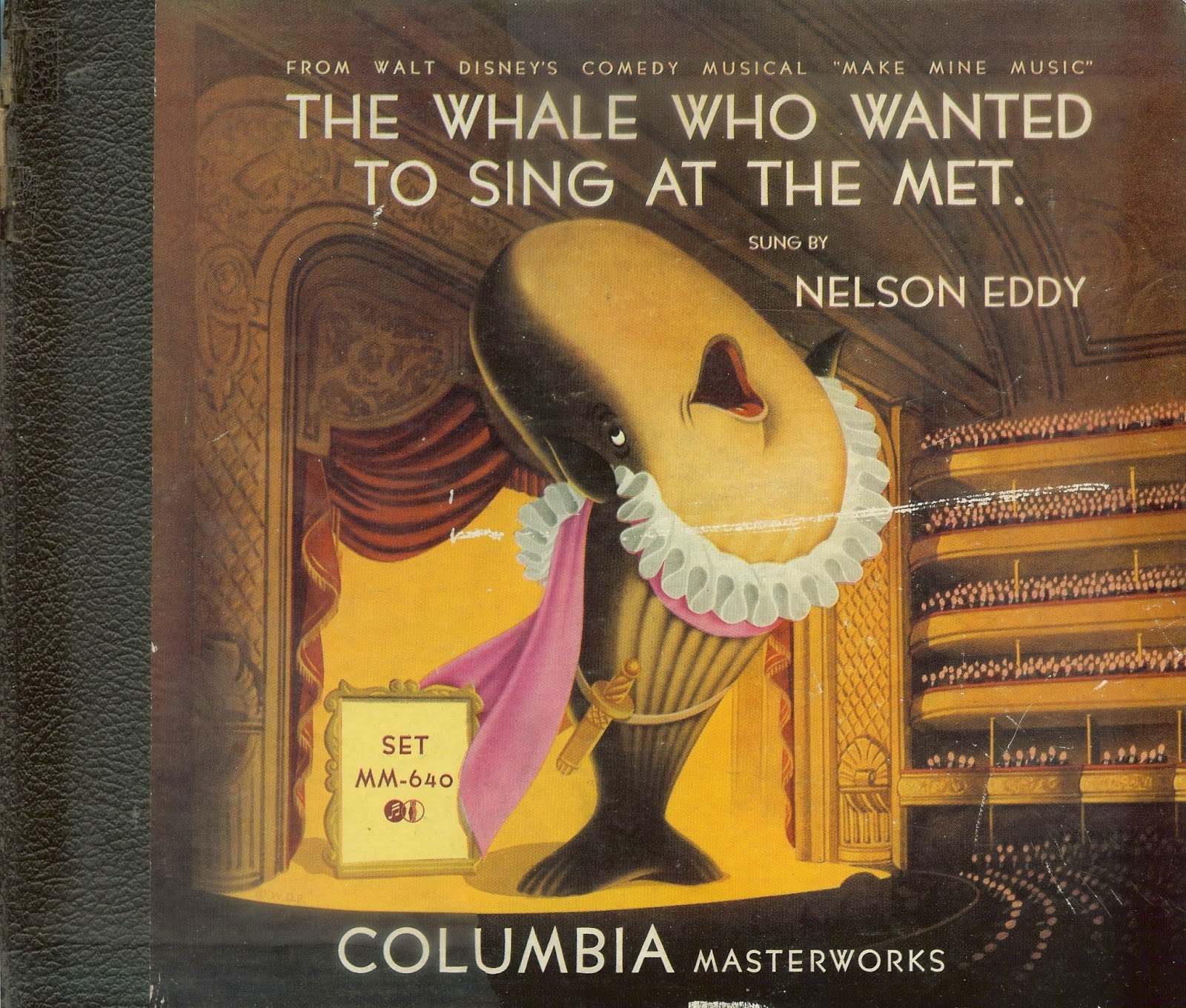 Walt Disney's 8th animated feature film was (by the company's own count) the 1946 collection "Make Mine Music." This hodgepodge of ten short musical films is sometimes referred to as "the poor man's 'Fantasia'" because it featured mostly popular music, rather than the Stokowski-led classical selections in the earlier feature, and did so most entertainingly with the likes of Dinah Shore, the Andrews Sisters, and (in two of the film's best sequences) Benny Goodman.  There were two exceptions to this: an abridged version of Prokofiev's "Peter and the Wolf" in which story elements were rearranged - a segment that would have nothing going for it if it weren't for the delightful narration of Sterling Holloway, better known as the voice of Winnie-the-Pooh, and this touching finale of the film, a vehicle for the multi-tracked talents of Nelson Eddy:

This recording is taken directly from the soundtrack of the picture, with the exception of about two minutes' worth of introductory material in which Eddy demonstrates the "Willie-the-Whale Method" of multi-voiced singing by performing "Three Blind Mice" as a round.  The package is an object lesson in how material from films were marketed for home use in those days long before videocassettes or DVDs.  The inside front and back covers (included as JPG files with this download) are illustrated with line drawings of the story, so that the listener who hadn't seen the movie could get some idea of what was occurring.  I won't give the story away here, but will say that there is plenty of good music in the telling of it, from "Shortening Bread" to excerpts from Rossini, Donizetti and Wagner, with Eddy providing the narration and all the voices - even the soprano in a fragment of a duet from "Tristan und Isolde"!

There is a DVD available of "Make Mine Music" which is well worth owning (and quite reasonably priced, too), but it unfortunately omits the first segment of the film, "The Martins and the Coys," because it contains "graphic gunplay not suitable for children."
Posted by Bryan at 10:55 AM 1 comment: