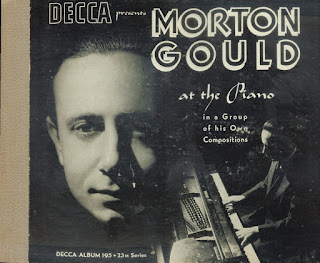 Summertime, and the listenin' is easy....or it should be, I suppose. Anyway, it seems a good time to share my latest Morton Gould acquisitions, One of these is his first-ever album, a group of piano solos recorded for Decca in 1940. His association with Decca did not last long; it produced exactly one other set (with a string orchestra) before he switched to Columbia, a relationship that proved much more fruitful. His first album with Columbia (as a conductor) included one of the same pieces as the first Decca set. This was the delightful "Pavanne" - his most popular piece - which he deliberately spelled incorrectly, with two n's, in the hope that ignorant radio announcers would pronounce it correctly!

The "Pavanne" was originally written for orchestra, but the other selections in the Columbia set feature Gould as arranger. Somehow he works in a reference to Enesco's Roumanian Rhapsody No. 1 in his arrangement of the Russian folk song "Dark Eyes". Of the piano compositions, attention is called to the group for which he coined the word "Caricatones" - for me, the most amusing of these is "The Child Prodigy", in which he works in not only the expected Hanon and Kreutzer exercises but also references to Haydn's D Major piano sonata and Chopin's "Minute Waltz"!
Posted by Bryan at 12:26 PM 11 comments: 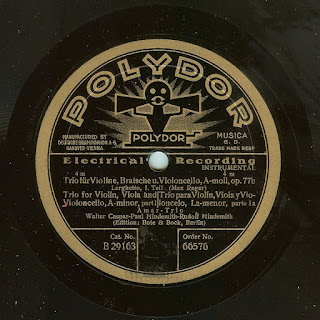 This is one of those recordings that I am particularly excited to possess and to share; however, about 98% of the excitement derives from the identities of the performers rather than of the composer, for Max Reger (1873-1916) is, for me, a problematical figure in music history. I respect Reger as a craftsman and as a carrier of the Austro-German chamber music tradition, but as much as I've tried, I can't really like his music. (I do retain some fondness for his orchestral Serenade, Op. 95, and its neighboring opus, the Introduction, Passacaglia and Fugue for two pianos, Op. 96 - with its comically interminable fugue subject culminating in a trill that sounds almost as an afterthought!) Part of the problem, I suspect, is that the weight of this tradition bogged him down - and those works without such weight, such as the serenades and string trios, seem to be more successful as a result. Certainly committed performances help. I remember reading somewhere (alas, I can't remember where) that Reger was a strong influence on Paul Hindemith as a budding composer, so it's not at all surprising that he and his cohorts should turn out a performance of this string trio that makes it sound as one of Reger's more enjoyable works:

For those unaware (as I was, until about six weeks ago), the super-rare acoustical version of the Amar Quartet's performance of Hindemith's Quartet, Op. 22, has been reissued in download format by a German outfit called Archiphon Records, and in quite a good transfer, too. It's well worth buying (which one can do here), but for those not wanting to download, the various tracks have been "autogenerated" as YouTube videos (a search on "amar hindemith archiphon" should bring them up).
Posted by Bryan at 5:23 PM 8 comments:

In recent years, the music of Nikolai Yakovlevich Miaskovsky (1881-1950) - or, to give the currently preferred transliteration of his surname, Myaskovsky (I still prefer the old one, merely because it doesn't relegate him to the back of the alphabet within the group of composers whose names start with "M") - seems to have made something of a comeback after many years of Cold War-era neglect. During his lifetime, his symphonies were regularly performed in the West, particularly by the Chicago Symphony under Frederick Stock, who not only programmed his epic Sixth on a yearly basis, but also commissioned the single-movement Twenty-First, destined to become his best-known work (recorded by Ormandy and Morton Gould, among others). After his death, however, his essentially conservative style became passé, and he became known merely as the composer who wrote more symphonies (27) than anyone else in the first half of the 20th century. A reassessment of his work became more feasible after Yevgeny Svetlanov undertook, in the wake of the Soviet Union's collapse, to record all of Miaskovsky's orchestral output, and while it's undeniably valuable to have this largess available, some of Svetlanov's performances don't quite measure up to earlier ones in those cases where comparisons are possible. There is evidence of haste in preparation and lack of rehearsal, and some of the tempi are glacially slow. A case in point: the earlier recording of his fine Sixteenth Symphony, conducted by Svetlanov's predecessor as director of the USSR State Symphony Orchestra, Konstantin Ivanov (1907-1984), takes 35½ minutes as opposed to Svetlanov's 46½:

I can never think of Miaskovsky without also thinking of Richard Taruskin, who gave me my first copy of this LP when I was a teenager, one of several gifts from this brilliant man to encourage my budding interest in Russian music, one of his specialties as a musicologist. Dr. Taruskin was, earlier in his career, a fine viola da gamba player (as proven by a number of recordings he made as part of the Aulos Ensemble, for the Musical Heritage Society), and that was my personal connection with him, for the fraternity of gamba players is and always has been a close-knit one, and my mother, also a member of said fraternity, has been friends with Dr. Taruskin for over 40 years. He, in fact, encouraged her to write and publish a viola da gamba method, which she did in 1979. The last time we saw him was about seven years ago, when he came to Atlanta to give a lecture at Emory, and almost his first words to me were about the Svetlanov Miaskovsky series. He seemed somewhat rueful about the notoriety he has gained as a music critic, something well in the future at the time I first knew him. I, like countless others before and since, have known Richard Taruskin as a mentor and teacher, and a great one.
Posted by Bryan at 2:03 PM 5 comments: