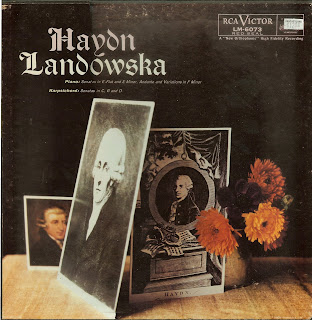 In the most recent issue of Classical Recordings Quarterly, there's an article by Donald Manildi entitled "Why Don't the Record Companies..." in which he expounds on deserving historical recordings that have not yet made it to compact disc.  One of his choices is this Haydn set by the great Wanda Landowska, whose legacy has been well served on CD with the curious exception of this album, one of her last (and issued posthumously in 1960):

For those who like to burn CDs from these downloads, this program is about six or seven minutes too long to fit on one CD (which may be a factor in its non-appearance on CD thus far).  What I did for myself was to make one CD for all the harpsichord tracks, and another for the piano tracks.

Haydn's birthday this year happens to be on Easter Sunday.  It's hard for me to believe that in only 19 years we will be celebrating his tercentenary - it seems only yesterday that we were celebrating Bach's!

Happy Easter, everyone!
Posted by Bryan at 1:32 PM 7 comments:

My vintage Ormandy series continues, with the first of his three studio versions of the Franck Symphony in D Minor, from 1945.  (The others, also for Columbia, were from 1953 and 1961.)  I'm quite fond of this recording, as it was my introduction to the glories of this great symphony.  In particular, the buildup in the coda of the first movement is most excitingly done.  The English horn solo in the second movement is, unfortunately, uncredited on the labels or album, but it must have been played by John Minsker, the English horn player in the Philadelphia Orchestra from 1936 to 1959.

This recording was reissued in 1948 as part of Columbia's launch of LP, as ML-4024.  Some copies of this have the same Steinweiss cover art as the 78 set, as shown in this scan lifted from Ken Halperin's wonderful site Collecting Record Covers: 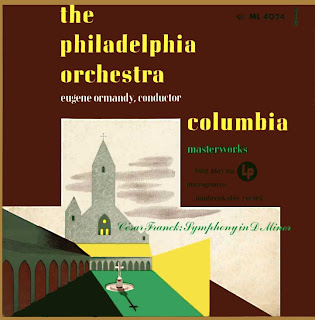 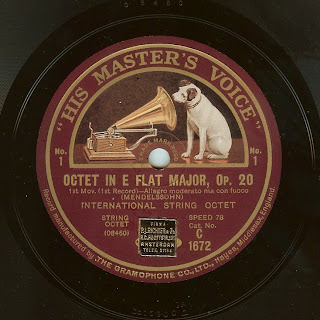 It seems almost unbelievable, when one looks at the 1948 Gramophone Shop Encyclopedia of Recorded Music, to realize that Mendelssohn's youthful Octet, that freshest example of his teenage genius, was unavailable to the record buyer except for three recordings of the Scherzo in Mendelssohn's own orchestration (as intended for the première performance of his First Symphony).  Such, however, was the case, since this first recording, from 1929, had long been deleted, and the second recording, by the Pro Musica Ensemble led by Henri Merckel, from French Polydor, had not yet been issued.  And the first recording had not even received very wide circulation, being aimed at the British market, with no representation on Victor:

The rather enigmatically-named "International String Octet" was really two separate string quartets, the International String Quartet headed by André Mangeot and the Poltronieri String Quartet headed by Alberto Poltronieri.  Both groups were active in the recording studios - but for the National Gramophonic Society, not HMV; and the Poltronieri Quartet also recorded for Columbia.
Posted by Bryan at 7:17 AM 8 comments: 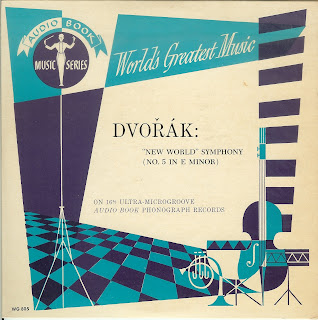 This one is, frankly, little more than a curiosity, and until about a week ago, I had forgotten that I even owned it.  But my memory was piqued upon seeing this YouTube video featuring a rare record changer, in which the presenter states that it's difficult to find a 16-rpm record that isn't of "Christmas music, crappy music, or talking books."  Well, Dvořák's "New World" Symphony, though it might be overplayed, certainly isn't "crappy music," and his comment triggered a memory of buying, some twenty years ago in a used book shop, this and three other symphonic works on 7-inch 16⅔-rpm records for a dollar each.  A bit of searching around the house produced the little records in question, all by anonymous performers, in a short-lived series designed as supplementary to the producing company's main business, which was, in fact, "talking books."  It isn't hard to see why the series was so short-lived.  The slower speed really doesn't lend itself well to music, especially when pressed on such inferior material as Audio Book was using at the time (1956) - the same type of cheap plastic that Columbia was pressing its 45s in.  I confess that my main reason for offering this transfer here is to find out if anyone out there knows anything about these records, and especially what source Audio Book may have been drawing from for the recordings.  Any guesses as to the identity of the orchestra and conductor are welcome!

The Audio Book Company, incidentally, is still very much with us, and is still purveying many of the same "talking book" recordings they first offered as small 16-rpm records in the 1950s, only now as cassettes and CDs here at their website.  One that I have particularly fond memories of is Marvin Miller's virtuosic reading of Carlo Collodi's "Pinocchio" in unabridged form on 4 CDs.  I had it in the early 70s as a set of five 16-rpm discs, purchased from the same shop where I bought 78-rpm Young Peoples Records - the Educational Record Center in Decatur, Ga.
Posted by Bryan at 4:53 PM 6 comments: 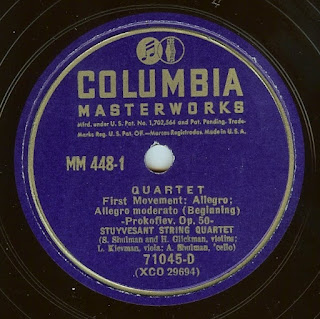 With this post I now have available all the sets that the Stuyvesant String Quartet made for Columbia prior to the American Federation of Musicians' recording ban of 1942.  I stumbled upon this set, in fact, while I was doing research for my last post featuring the group; in order to make the claim that their recording of Ravel's Introduction and Allegro was the only one to feature John Dembeck on second violin, I had to make sure he wasn't on this Prokofiev Quartet, so I did a Google search on "prokofiev stuyvesant" and lo and behold, this set had just gone up for sale on eBay, and quite reasonably priced, too!  Unfortunately, it was minus the album, since the radio station that had owned it previously had "their own way of cataloguing" its records.  But the music is what really matters, after all, and here it is: