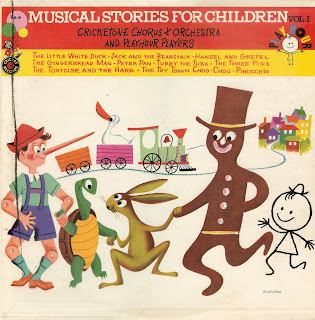 This post is pure nostalgia for me, because recordings similar to the ones in it represent some of my earliest record-listening experiences. Cricket Records was a line of children's records introduced in 1953 by Cy Leslie (1922-2008) as the flagship label of the Pickwick Sales Corporation (later Pickwick International), initially as 10-inch 78s, then as 7-inch 78s and 45s. I had several dozen of these little records in both speeds between the ages of 4 and 8; the 45s were sold in department stores, and the 78s, which even at that age I preferred, could be found as late as 1970 at the Record Center at Broadview Plaza in Atlanta, probably as unused old stock. In 1959 Cricket marketed LP releases, most of them drawing from the singles line, including this one:

Most enjoyable of these tracks for me, at this remove of nearly fifty years, is probably "Peter Pan" with its zany little songs for Captain Hook and the crocodile, with the "Gingerbread Man" running a close second - the baked creature's silly laughing song is maddeningly memorable! I also find myself marveling at the creativity that went into the fairy-tale arrangements, all of which are rendered in verse and song, with a quartet of singers sometimes in unison, sometimes in harmony, and accompaniments in which wind instruments predominate, often with a bass clarinet on the bass line, and a rhythm section in the background. Even when I was young, records for children such as these were going out of fashion. The generation of kids after my own had nothing but Disney music marketed for them, and I pity them....
Posted by Bryan at 4:38 PM 6 comments:

The First Complete Recording of the "New World" Symphony

After all these years, the symphony most associated with America remains Dvořák's ever-fresh Symphony "From the New World." It is one of the peculiarities of the early recording industry that its first complete outing on shellac should have emanated from London, played by a Manchester-based orchestra conducted by an Irishman. Oh, the famous "Largo" had been recorded in the USA several times, by bands and orchestras including those of Philadelphia and New York, always abridged to one four-minute side. In 1919-21, Landon Ronald made the first recording of all four movements, issued piecemeal and with all but the Scherzo being cut. Then in 1923 came Harty's fine version, his first recording of any symphony, absolutely complete except for one repeat in the Trio of the Scherzo:

This would be the only complete "New World" recorded acoustically; the next recording would be Stokowski's 1925 early electric version (which can be heard here). Harty would re-record the symphony in 1927, as would Ronald; interestingly, both conductors would be knighted during the period between their respective recordings.
Posted by Bryan at 5:47 PM 8 comments: 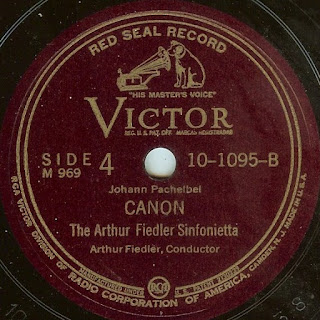 Those of you seeing my title for this post, and then seeing the label picture above, must be thinking, "he's joking, right?" Because the Pachelbel Canon is so familiar to us nowadays, that it's hard to imagine a time, not so long ago, that the piece, and its composer, was almost as unknown as two of the other composers whose works Arthur Fiedler's little orchestra (composed of Boston Symphony players) recorded during the same week. (Doubtless many people, particularly cellists, wish this were still the case! I myself always had fun with it, as a continuo harpsichordist, because I could slip in tunes like "Jolly Old Saint Nicholas" with the right hand and see if anybody noticed. Nobody ever did.) The other two composers represented here are, even today, hardly household names: the lutenist Esajas Reusner (1636-1679) and Rev. William Felton (1713-1769):

It's taken six years, but between 8 and 9 o'clock this morning this blog passed a milestone: one million pageviews! It now stands at 1,000,301. My thanks to you, my loyal fans, for making this possible.
Posted by Bryan at 3:35 PM 13 comments: