Thursday, October 30, will see the 150th anniversary of the birth of that great patron of 20th-century music, Elizabeth Sprague Coolidge (1864-1953). Her influence on music was incalculable. Her commissions include a number of works that became mainstream repertory, such as Bartók's Fifth String Quartet, Copland's Appalachian Spring, and Poulenc's Flute Sonata, as well as such important works as the first string quartets by Britten and Prokofiev, the last two by Schoenberg, and Stravinsky's Apollon Musagète. Less well-remembered is the fact that she was a pianist and composer in her own right. Her String Quartet in E minor, performed by the group that bears her name, is evidence of her gifts in the latter capacity:

I don't believe this piece has ever been recorded otherwise, nor does it seem to have been published. I don't even know when it was written; Victor's booklet of program notes (included as a PDF file, and from which the picture above is lifted) omit that seemingly important bit of information. The piece may not be an earth-shattering masterpiece, but it is well-crafted and pleasing to the ear, in a solidly post-romantic idiom. There are three movements: a sonata allegro, a "Funeral Lament" as a slow movement, and a finale called "Divertimenti" - variations and a fugue on the Quartet's opening melody.
Posted by Bryan at 10:43 AM 6 comments:

The Worst Gilbert & Sullivan Record Ever Made? 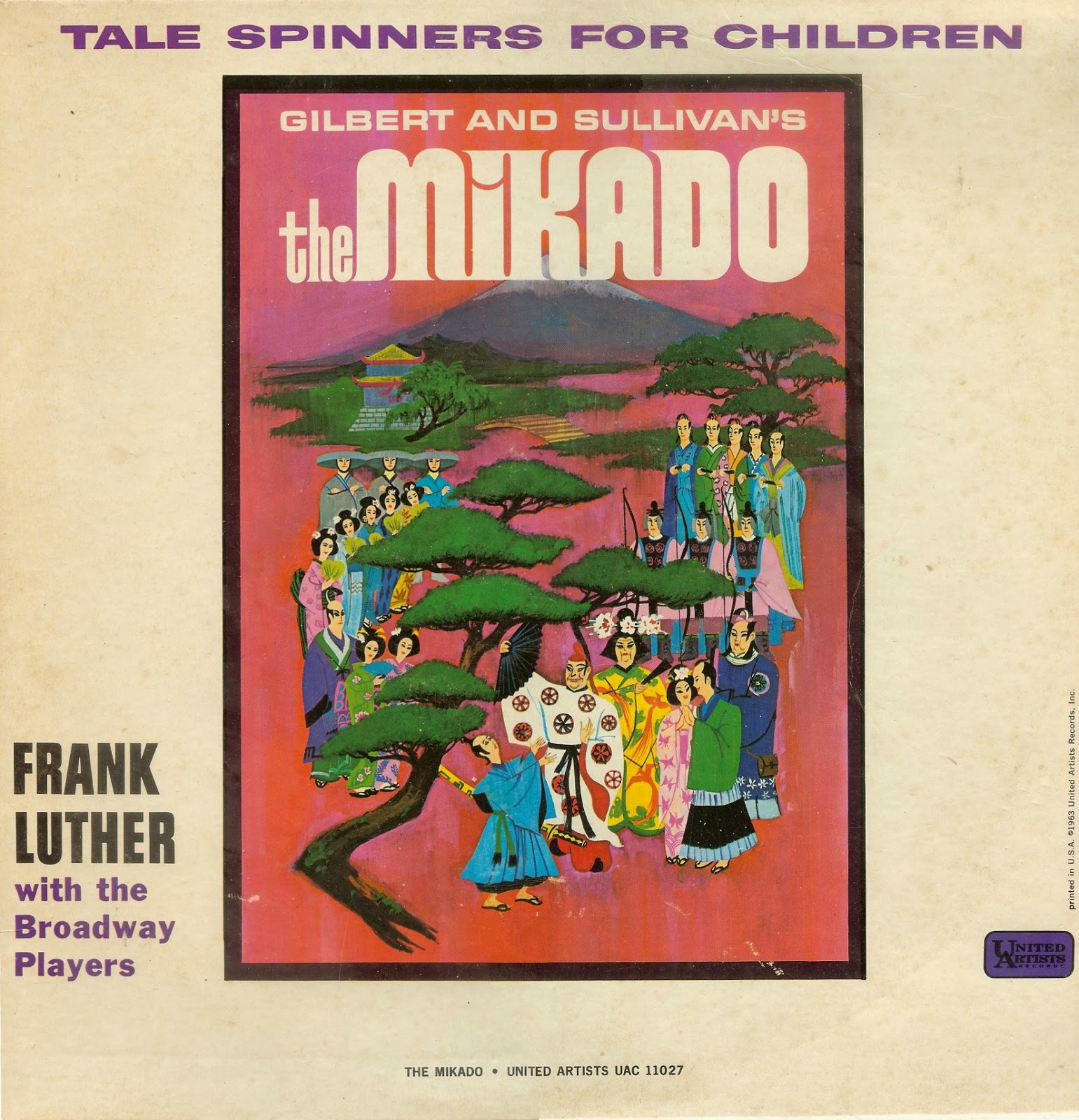 In his amazing online Gilbert & Sullivan Discography, Marc Shepherd makes available his and others' reviews of just about every recording of the Savoy operas ever made. Marc didn't review this one himself, but one of his readers did, and indignantly called it "the worst G & S recording ever" and that it "must be heard to be believed!" Well, here's your chance:

About the only part of Gilbert & Sullivan's original conception that survives in this treatment is the story itself, which is mostly intact. Sullivan's tunes are rewritten (in two cases almost completely) and his orchestra replaced with a jazz combo of Hammond organ, guitar, bass and drums with xylophone, and Gilbert's song lyrics are almost all dumbed down, one imagines in an attempt to make them more comprehensible to the children at which this record was aimed. One imagines that, but, on the other hand, some of the rewritten dialogue contains jokes that were surely over the heads of kids in the 60s. Here's an example:

Nanki-Poo: "I'm a poor musician, my lord."
Ko-Ko: "A poor musician? You're a terrible musician! How'd you ever get in the union?"

Rather adult humor, if you ask me. Then again, Frank Luther (1899-1980) was at one time the most respected purveyor of children's records in the English-speaking world, even serving as a Decca executive in charge of their children's department during the 1940s and 1950s. So this "Mikado" probably represents a sincere attempt to introduce the glories of Gilbert & Sullivan to children, but it falls a bit flat on that score simply because there's so little of Gilbert or Sullivan left in the end product. And yet, it has its endearing qualities, too, if you approach it in the right spirit and don't expect too much. I'm strongly reminded of the Rankin/Bass holiday TV specials - it has the same cartoonish kind of energy.

I should say a word or two about the series in which this recording was issued, since it's obvious that the reviewer I referenced above assumed that the United Artists "Tale Spinners for Children" was a junk series. Hardly! They were cheaply made (I remember them being sold at Kresge's department store for 99 cents per LP) but the material was of high quality. Most of them originated from England as "Atlas Tale-Spinners." They told familiar children's stories against a background of classical music, probably culled from existing recordings, and there were even stories of composers added into the mix. To this day I have battered copies of "The Story of Beethoven," "The Story of Chopin," and "The Story of Mozart" that I had as a lad of five. Many of these can be heard online; see under my list of "Some Favorite Record Links" at the right for a Tale Spinners site that features these.
Posted by Bryan at 1:13 PM 5 comments:

If the most popular work by Hungarian composer Zoltán Kodály (1882-1967) is the Suite from the opera "Háry János", then perhaps the second most popular is his brilliant answer to Liszt's Hungarian Rhapsodies, the Dances from Galanta, written, as the Victor labels for its first American recording proclaim, "for the 80th Anniversary of the Budapest Philharmonic Society, 1934". Here is that recording:

Fiedler's excellent recording missed being the very first of this work by less than three months; Victor de Sabata beat him to the punch by recording it for Polydor with the Berlin Philharmonic in April, 1939. For all practical purposes, Fiedler's set would be the only way Americans would be able to experience this piece on record during the 1940s. (Fritz Reiner recorded it for Columbia in Pittsburgh in 1945, but that version was unreleased until Sony tapped it for a Masterworks Heritage CD in 1996.)

The first side of my copy is a bit noisy, I'm sorry to say - especially at the beginning and end of the side. It was a wartime pressing, after all.
Posted by Bryan at 7:00 PM 3 comments:

I grew up on Robert Casadesus' recordings of the Mozart piano concertos, in his incomparable collaborations with George Szell and the Cleveland Orchestra from the 1950s and 1960s.  These were my introduction to these magical works, when I was a teenager, and ever since, this has seemed to me the right way to play Mozart.  So I was delighted to find recently the very first Mozart concerto recording made by the great French pianist (and although the pressing is not ideal, perhaps, being a postwar one, it does at least boast a Steinweiss album cover I hadn't encountered before):