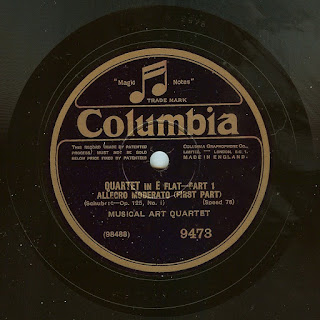 Some years ago, I uploaded two of the Musical Art Quartet's major recordings for Columbia, made during 1927 and 1928, noting there were three in total. Well, here's the third and last, one of the group's two contributions to the Schubert Centennial celebrations in 1928:

This set was actually issued in Britain one month before it was issued in the USA, its country of origin. In the USA, it was the last of the Schubert Centennial sets to be issued -- as Masterworks Set No. 96, in December, 1928, coming after Set No. 97, the Octet, which had been issued the previous month. It was viewed as a holdover by the Phonograph Monthly Review, whose editor called the piece "an interesting little work, but hardly as significant as some of the other Schubert recordings."

Sascha Jacobsen (1895-1972), the leader of the Musical Art Quartet, had been an exclusive Columbia artist for nine years (since 1918) when he founded the ensemble. His last recordings for the company as a soloist were made the day after the Quartet's filler side for this set, though the Quartet would continue to record short pieces for Columbia until 1930.
Posted by Bryan at 9:15 AM 8 comments:

One of the most renowned record shops in America in the second quarter of the twentieth century was New York's Gramophone Shop, on East 48th Street. Begun in the spring of 1928 by William H. Tyler and Joseph Brodan, the store did a thriving business in imported recordings and eventually took to releasing esoteric fare under its own imprint, although in most cases the actual records were recorded and pressed by HMV. (Latter-day collectors have additional reason to bless the existence of the Gramophone Shop - the three editions of the Encyclopedia of Recorded Music which it sponsored, from 1936, 1942, and 1948, which remain standard reference works.) Among its albums under the heading of "Gramophone Shop Celebrities" is this marvelous collection by the Danish organist Finn Viderø:

Of the Gramophone Shop's two co-founders, Mr. Tyler, who had since at least 1925 been the manager of the record department at the New York Band Instrument Company (as we find out in the June, 1925, issue of "The Talking Machine World"), has a connection with my native city, Atlanta, as well. For, by the time these "Gramophone Shop Celebrities" sets were being made in the late 40s, Mr. Tyler had left New York to found his own shop down here, at 845 Peachtree Street, known as Tyler's Gramophone Shop. My old mentor Bill Brooks spoke of working for this shop (and indeed, the 1947 Atlanta City Directory lists him as a salesman there) - which would explain the large number of imported records that Mr. Brooks possessed, for Mr. Tyler worked as an importer here as he had in New York. His store didn't last long, unfortunately. It's listed in only two editions of the city directories, 1947 and 1948-49. Some twenty years ago I acquired a few 78s from a lady who had been one of his customers (this lady's name, alas, I cannot remember, but she attended the church I was playing for at the time). She remembered Tyler's Gramophone Shop as "a wonderful place," and that "it closed down after Mr. Tyler committed suicide." The original Gramophone Shop in New York closed its doors for good early in 1954.

I do not know whether I will post again before Christmas, so everyone accept my best wishes for a happy holiday season!
Posted by Bryan at 6:05 PM 7 comments: 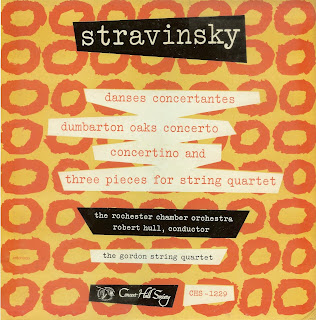 A few months ago, Nick Morgan tipped me off not only to the existence of this LP, but to its availability on ebay at a quite reasonable price. (Thanks, Nick!) In December, 1954, when the record was released, it must have seemed the height of chutzpah for a relatively small record label like Concert Hall, with a little-known orchestra and conductor, to challenge major labels like RCA Victor and Mercury, who had the only available recordings of Stravinsky's Danses Concertantes and Dumbarton Oaks, respectively, conducted by Stravinsky himself! And quite creditably, too. For good measure, Concert Hall threw in their recordings, from 78s originally sold by subscription, of the Gordon String Quartet in Stravinsky's complete works for string quartet - which, I have to admit, was the main reason I was interested in this LP:

I can find out very little online about the conductor, Robert Hull, and the sleeve-note for the record unobligingly offers no information either, focusing its attention on the orchestra (and advertising its previous releases). It appears that Hull was active also at Cornell University during this period, then went to Fort Worth, Texas, in 1957 to conduct the symphony orchestra there. In the 70s his name turns up as conductor of the Arizona Symphony on several LPs of contemporary music made by very small specialist labels such as Klavier and Laurel.  Jacques Gordon, the leader of the quartet that bears his name, had, sadly, been dead for six years at the time this LP reissued his Stravinsky recordings.
Posted by Bryan at 7:27 PM 13 comments: