Oscar Levant in a Recital of Modern Music

The Pittsburgh-born pianist, composer, author, actor, and (in later years) professional neurotic Oscar Levant (1906-1972) probably doesn't need any introduction to my readers, but perhaps this particular album does, for with the exception of the oft-reissued Gershwin preludes, it is comparatively rare. It actually was his first, issued in mid-1942, when he was already famous for his role as a panelist on the radio quiz show "Information Please" and as the author of the best-selling "A Smattering of Ignorance", and, in some respects, the most satisfying of the dozen or so albums he would make for Columbia:

Gershwin, Debussy, Ravel and Shostakovich are of course very well-known, but Levant the composer and Valery Viktorovich Jelobinsky (1913-1946) are far less so. The latter (whose name has also been transliterated "Zhelobinsky") was quite prolific in his short career, with six symphonies, three piano concertos and four operas to his credit. Shostakovich evidently thought highly of him, but posterity seems to have completely ignored him. This is the only recording ever made of the second of these two Etudes (from a set of six, which Horowitz championed for a time); Raymond Lewenthal later included the first one on a Westminster LP.
Posted by Bryan at 10:01 AM 9 comments: 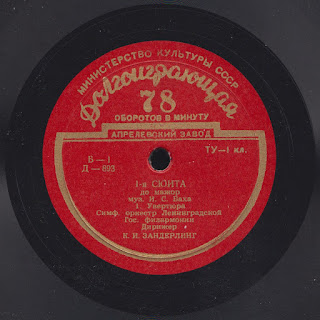 In the early 1950s, the switch from standard 78-rpm records to the new long-playing ones occasioned, in some countries, some pretty strange hybrid types. Deutsche Grammophon had a "variable micrograde" 78 shellac disc, playable with an ordinary 78-size stylus, that managed to extend the timing of a 12-inch disc to eight minutes. These didn't last long; by 1952 DGG bowed to the future and began producing 33-rpm LPs. In the Soviet Union, LPs were also launched about 1952, but with a twist - longer works were presented as 33-rpm records, but shorter ones were issued on 8-inch or 10-inch 78-rpm vinyl records, playable with the same microgroove stylus as the 33-rpm LPs. I'm aware of only one issue on Soviet microgroove 78s that offered an extended work on two records, and this is it:

This appears to be the first Soviet recording of a Bach orchestral work other than a solo concerto or a transcription, and it's fitting that Kurt Sanderling (1912-2011) should have been chosen to make it. Born a Jew in Germany, he fled east when the Nazis took power, becoming co-conductor of the Leningrad Philharmonic (with Yevgeny Mravinsky) before returning back to East Berlin in 1960. His performance of the Bach Suite sounds rather old-fashioned in some ways, with stately tempi and no continuo instrument, but in terms of scholarship, it's quite up-to-date, with all cadential trills observed, even those usually missing from contemporaneous recordings of the Bach suites.
Posted by Bryan at 9:24 PM 4 comments:

The third and final installment of my Coolidge Quartet series is here, meaning you can now hear every one of their published Victor recordings through my uploads. All of their sets are fairly rare, but these two may be the rarest, so I have saved them for last. These two sets also share another, rather more unfortunate distinction: there are cuts in both major works presented. In the Hummel work, only the slow movement is affected, but in the work by Massachusetts-born Daniel Gregory Mason (1873-1953), all the movements are cut, the last one most seriously. Had the cuts not been taken, however, it would not have been possible to include the filler side, a quartet movement by Virginia native Mary Howe (née Carlisle, 1882-1964):

I had never heard the Hummel quartet before acquiring this set; it is charming, and its finale is particularly fun. Certain passages suggest that Hummel was familiar with Bach's "Goldberg" Variations.
Posted by Bryan at 8:17 PM 8 comments:

Here is the next installment of my Coolidge Quartet series. The "Music for Four Stringed Instruments" by Charles Martin Loeffler, based on a Gregorian chant for Easter Sunday ("Resurrexi"), was composed to honor the memory of Victor Chapman, the first American aviator to be killed in the First World War - in 1916, a year before the USA itself actually entered that war. Loeffler, evidently, was a friend of Chapman's father. The piece makes unusual demands on the cellist, who must, several times during the second movement, tune the lowest string down while playing it. This was the first recording of the work, and the Coolidge Quartet's second recording of anything:

The Coolidge Quartet's version of Beethoven's G Major Quartet, Op. 18, No. 2, competed directly in Victor's catalogue with one by the Budapest Quartet. Irving Kolodin, in his 1941 "Guide to Recorded Music," preferred the Coolidge version, saying that "the Coolidges have apparently made a particular study of this work, for they play it with extraordinary grace and flexibility. Comparatively the Budapest performance is a bit heavy-handed though superbly executed."

The Coolidge Quartet Completed (I)

My heroic quest is ended! This summer I have realized my goal of acquiring all of the Coolidge Quartet's published recordings, when the six sets that I lacked to make up a complete collection became available to me almost simultaneously from two different sources. So, this is to be the first of three posts uploading these. Particularly valuable is the piano quintet Hagiographa by San Francisco-born Frederick Jacobi (1891-1952), a composer who, like his teacher Ernest Bloch, specialized in music on Jewish themes. Like the Roy Harris Piano Quintet recording of a year earlier, this has the Coolidge Quartet collaborating with the composer's wife, Irene Jacobi (née Schwarcz, 1890-1984):

This Beethoven set was the Coolidges' last to have Nicolai Berezowsky as the second violinist; in the next season, he would be replaced by Jack Pepper.
Posted by Bryan at 9:23 AM 9 comments: