This is my first foray into discography by means of this blog.  I present here a listing of all US Columbia Masterworks 78-rpm album sets known to me between 1924 (when the series began) and 1951 (when the series effectively ended with the takeover of LP), in numerical order, downloadable as a PDF document.  All 1,000+ regular series sets (prefixed "M-" from 1939 on), as well as all 33 Opera sets and all 355 "X-" sets (two-record sets) are included, and for us Steinweiss fans, data on which sets are known to me to be graced with his inimitable cover designs.   Individual record numbers for each set, manual and automatic sequence, are given, but not matrix numbers or recording dates, most of which can be found on the CHARM website anyway.  This is intended to be a checklist printable on 66 pages of letter-size paper, not a complete discography, but I hope it will prove useful for collectors nevertheless.

Email ThisBlogThis!Share to TwitterShare to FacebookShare to Pinterest
Labels: Discography 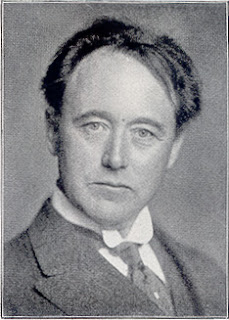 The Austrian conductor Felix Weingartner (1863-1942) is best-remembered for his interpretations of 19th Century masters, especially Beethoven and Brahms (he was the first to record all nine Beethoven symphonies), but he was equally adept in earlier music.  Recently, Satyr gave us Weingartner's fine version of Mozart's 39th Symphony (from a pioneering 1923 recording, one of five complete symphonies Weingartner recorded acoustically), and so I answer with three works: the famous "Toy Symphony" formerly attributed to Haydn but now thought to be by one Edmund Angerer, a brisk, no-nonsense version of Mozart's "Eine kleine Nachtmusik," and a rarely-heard set of selections from Handel's opera "Alcina."  The details and links to the downloads:

In the last post I showed examples of the initial group of generic covers used for Red Seal album sets, all of them unveiled at the time when the brand name of the label was still officially just "Victor."  In the spring of 1946, "RCA" was added to the head of the brand name, making it "RCA Victor."  (The last Victor 12-inch Red Seal record I have seen with a "Victor-only" label is 11-9155, "The Bells of St. Mary's" and "The Lord's Prayer," by the Victor Chorale under Robert Shaw.  11-9156 is the first record of M-1050, the Bach Brandenburg Concertos Nos. 3 and 4 by the Boston Symphony under Koussevitzky, an issue of May 1946.) Sometime thereafter, four new generic cover designs were unveiled, using the new brand name in a box, with a full-color representation of Nipper in another box to the right.  Two of these were signed by Frank Decker: 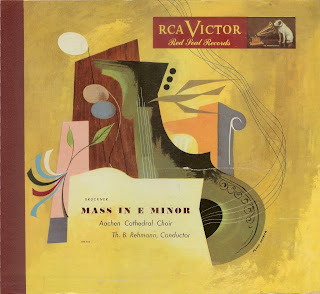 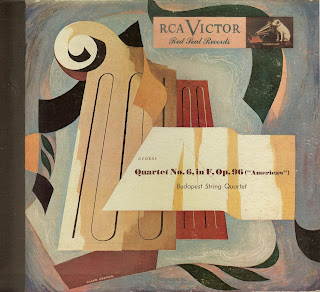 The following design is unsigned, though it looks like another Frank Decker to me: 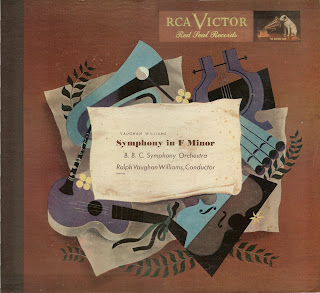 And the last of these new covers was signed "stahlhut."  This is almost certainly Henry Stahlhut, who also designed covers for magazines like Gourmet and Fortune: 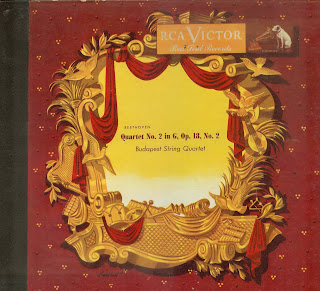 All of these designs, and the ones in the previous post, continued to be used by RCA Victor on 45-rpm sets and even on a few early LPs.
Posted by Bryan at 2:49 PM 3 comments:

I've been sharing a bunch of Alec Steinweiss' Columbia cover designs lately, including generic ones, and, for a change of pace, offer the answer of Columbia's main competitor, Victor, to some of those designs.  In 1943 Steinweiss unveiled an appealing generic design for back issues in the Columbia catalog to replace the drab "tombstone" cover.  Victor's generic covers were equally drab in the early 40s, but that changed, probably in 1945, with the introduction of four new cover designs signed by Frank Decker.  Here are two of them: 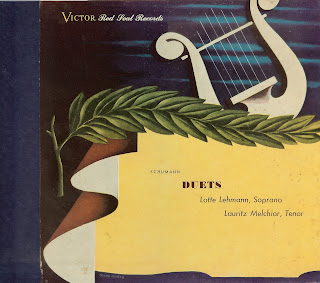 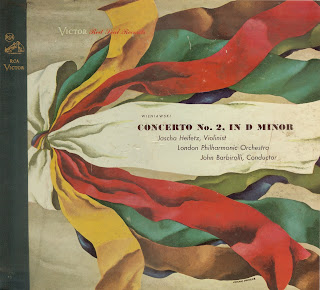 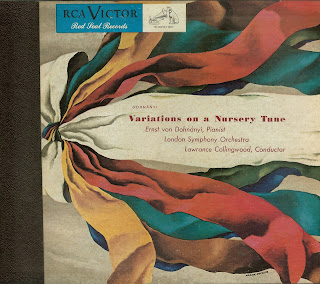 As I said, there were four of these 1945 designs in all, but I do not have the other two in their original "Victor-only" form (though I know they exist, for I have owned examples in the past).  I do have them as 45-rpm sets, however, with the modified form: 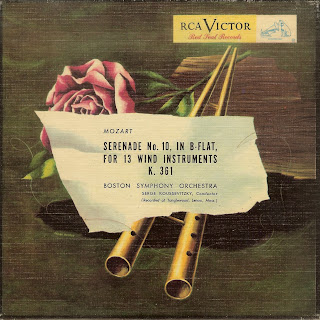 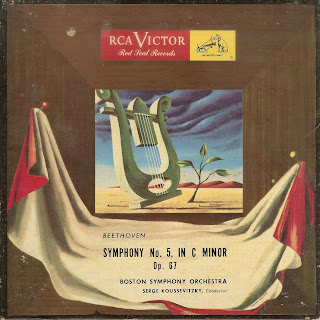 There were four additional generic designs a year or two later, which will be the subject of the next installment.

Incidentally, fans of Steinweiss' work will want to obtain the Taschen book, formerly priced at $500 as a limited edition, but now at Amazon for $44.09 in general release.  It's well worth that, and contains over 250 of his cover designs for Columbia, Decca, London and other labels.  A magnificent production indeed!  The Amazon link is here.
Posted by Bryan at 7:22 PM 2 comments: 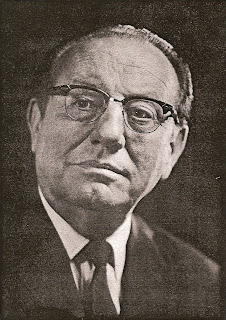 Maurice Ravel's 1922 orchestration of Mussorgsky's piano suite, "Pictures at an Exhibition," has for so long been a part of the standard orchestral repertory that one is apt to forget that many other people have tried their hand at orchestrating it too.  Among these were Sir Henry Wood, Leopold Stokowski, and the subject of this week's upload, Lucien Cailliet (1897-1985), French-born American composer, conductor, arranger and clarinettist.  In 1919 he joined the Philadelphia Orchestra in the latter two capacities, and eventually became Eugene Ormandy's orchestrator of choice.  In 1937 his version of Mussorgsky's masterpiece was unveiled and immediately elicited comparison with Ravel's, most of it negative (perhaps unsurprisingly).  Nevertheless it is worth a listen.  There are a few places where I think I actually prefer Cailliet's orchestration (the trombones in "Bydlo" as opposed to Ravel's tuba, for example), and all of the Promenades are there (Ravel had omitted the one before "Limoges").  Judge for yourself - here's the only known recording of this arrangement, made shortly after its première:

Last summer, I uploaded another Cailliet orchestration conducted by Ormandy, of a suite from Purcell's opera "Dido and Aeneas."  This MP3 file is still available, and a FLAC file has been added: