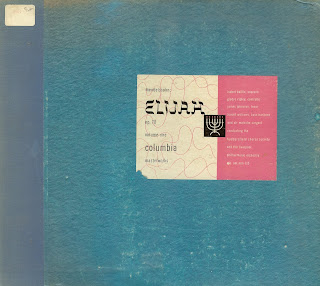 Felix Mendelssohn died on November 4, 1847, and to commemorate the 100th anniversary of this, Columbia issued this set of one of his grandest works, the 1846 oratorio Elijah.  This set actually was intended to replace an earlier (1930) recording of the work, conducted by Stanford Robinson, which featured two of the same soloists on the present recording - Isobel Baillie, soprano, and the great Harold Williams, bass-baritone, in the title role.  The other two soloists are Gladys Ripley, contralto, and James Johnston, tenor.  Except for Williams, these are exactly the same forces (soloists, chorus, orchestra and conductor) that were heard on the previous year's recording of Handel's Messiah which I uploaded around this time last year.  (Sargent would go on to record the work again, about ten years later, with the same chorus and orchestra but with different soloists.)

This Sunday is the birthday of the Lithuanian-born violinist, conductor and teacher Alexander Schneider (1908-1993), perhaps best known for his work with the Budapest String Quartet, of which he was second violinist from 1932 to 1944 and again from 1956 to their disbanding in 1967.  In between his two stints with the Quartet, he was involved in a variety of projects, perhaps the most famous being organizing the Prades Festival with Pablo Casals.  One of the most intriguing projects was a fruitful collaboration begun in 1944 with the harpsichordist Ralph Kirkpatrick (1911-1984), which even resulted in a number of contemporary works being written for them, including a sonata by Milhaud and a Sonatina by Walter Piston.  They recorded the latter work, as well as six Bach sonatas, six by Handel, and eight by Mozart.  The duo's first appearance on records was this album of three Mozart sonatas:

At the time, the substitution of a harpsichord for the piano in these works was somewhat controversial, and still might raise some eyebrows; but it must be understood that the pianos of Mozart's time were actually closer in sonority to the harpsichord than to the modern grand piano, and in 1945 replicas of fortepianos (the term that has come to be used for early pianos) were still a good twenty or thirty years in the future.  So the use of the harpsichord here represents a compromise, although in truth it works better in the earliest Mozart violin sonatas than in the later ones.  Ralph Kirkpatrick, with all his artistry, was probably the only harpsichordist at the time who was able to pull it off convincingly.

About a month ago, I treated myself to the Leonard Bernstein Symphony Edition, a 60-CD set containing 110 symphonies that he recorded for Columbia from the 1950s through the 1970s.  Among these, of course, were his own three - Jeremiah, The Age of Anxiety (based on W. H. Auden's poem of the same name), and Kaddish.  It occurred to me, as I listened to the second of these - for me, the finest of the three, and one of his finest works altogether - that I had long harbored a mono LP of the same work (the version in the CD set is the stereo remake, featuring Philippe Entremont at the piano), and that the older recording represented the only extant one of the original version of the score.  In 1965 Bernstein, while preparing the replacement recording, decided to revise the finale of the symphony, which originally had limited the piano's role to a single chord at the end.  He had come to feel that this didn't so much convey the intended detachment in Auden's poem as rob the piano of its concertante function, so the revision incorporates the piano into the scoring and even provides a cadenza.  No doubt Bernstein was right, but it is still, I think, valuable to be able to hear his original intentions as represented by the earlier recording:

During the late 1920s, when the introduction of electrical recording made it possible for the record companies to make on-location recordings on a wide scale, a great deal of attention was focused on the one instrument which had no chance of being recorded by the acoustical process - the pipe organ.  The pages of the HMV and Columbia catalogues of this period are littered with organ records, most of them by organists of strictly local (British) reputation - men such as G. D. Cunningham and George Thalben-Ball.  An exception was the Belgian-born organist and composer Guy Weitz (1883-1970), a student of Widor and Guilmant at the Schola Cantorum in Paris.  At the onset of war in 1914 he fled Belgium for London, where he was organist at the Farm Street Church from 1917 to 1967.  HMV got him to make these first recordings of two Franck chorales: