Brahms by the Léner Quartet

They actually recorded this particular quartet twice, the above recording replacing an acoustical version of 1925.  It was my intention to bring you this earlier recording when I purchased this set, which was advertised in a mail order catalogue as Columbia Set 35 (the last acoustical set issued in the USA by Columbia).  When I received the package, the album cover was indeed that for Set No. 35, but imagine my consternation upon unwrapping the actual records, to discover Royal Blue shellac pressings with "Electrical Process" on the labels! 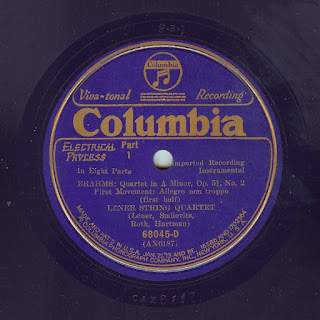 My guess is that the store which sold this set in the 1930s had stocked Set No. 35 for years without selling it, then when Set No. 173 was released as its replacement, the distributor offered the new discs in exchange for the old ones, without the store's having to return the album as well, and therefore the new discs were sold housed in the old album.  This is something that could have happened with a number of Léner Quartet sets, so I suppose the lesson to be learned here is that I shouldn't buy any more of their purported "acoustic" sets based on the set number only, that I should instead insist on being quoted the actual disc numbers; if they are indeed acoustical they will be below 67200-D.  I guess I shouldn't gripe too much, because this is a beautiful performance of a great quartet, but I doubt that I would have paid $50 for it, particularly as it, unlike the acoustical version, has been reissued before, long out-of-print though it may be....
Posted by Bryan at 7:07 PM 1 comment:

Fred over at Random Classics recently gave us the London Suite by the "uncrowned king of British light music" (to use Peter Dempsey's phrase from a Naxos reissue), Eric Coates (1886-1957), as conducted by a veteran of American light music, Morton Gould.  I answer with its sequel, conducted, as were many recordings of his music during his lifetime, by the composer himself:

American Columbia had quite a few recordings by Eric Coates on its catalogue, as he was then very popular over here, but only two of them made it into the Masterworks album set series (the other was the "Cinderella" Fantasy).  When I was a boy of eleven, I owned (but alas, no longer own) an American Columbia coupling of Coates conducting his magnificent London Bridge and Knightsbridge marches (the latter being a movement from the original London Suite), and I have loved his music, with its sense of everything being right in the world, ever since.

During the 1940s, Coates switched his recording allegiance from EMI to Decca, and one of his first productions for that label was a recording of his 1944 suite, The Three Elizabeths, which boasts another wonderful march that honors the then-18-year-old Princess Elizabeth, the current Queen:

This, by the way, is not the same recording as one that Fred offered last year, on a London LP coupled with Coates' Four Centuries Suite.  That recording is a remake, dating from the early 1950s.  This set was among the first English Decca "ffrr" records imported into the US after the war, and sold in special (US-made) albums, in this case with a catalogue number of EDA-8: 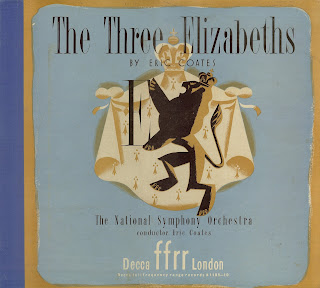 Today I present the first recording made in the West of one of Shostakovich's greatest symphonies, the Tenth, by the great Dimitri Mitropoulos (1896-1960).  And it remains one of the most searingly intense, with the fastest second movement on record.  Mitropoulos would, of course, have had no way of knowing that this movement was Shostakovich's musical portrait of Stalin (as the composer admitted in his memoirs), and more's the wonder, for the performance blazes with rage like no other I've heard.  The third movement, which has always seemed to me like Shostakovich's own self-portrait (that D-S-C-H motto!), is also on the brisk side, and gains a special urgency thereby.

I can't pass up the opportunity to comment on the rather startling cover for this LP (pictured above).  Charles Burr, in his liner note for ML-4959 (which is for the most part a long essay about the relationship of the Soviet composer to the Soviet government), says of the conclusion of the symphony that "there is an escape from tragedy back into the happiness of childhood, for it is only childhood that permits the dwelling once again in personal, non-political emotions." And yet the cover photograph displays a kid who doesn't look very happy to me! while behind him a faceless figure - obviously one of authority - stands in a displeased pose with arms crossed.  If this isn't a metaphor for the relationship of the composer to the state, I don't know what is.  This photograph was taken by Howard Zieff, later to become a film director, whose credits in that arena include "My Girl" and "Private Benjamin."
Posted by Bryan at 11:33 AM 4 comments: