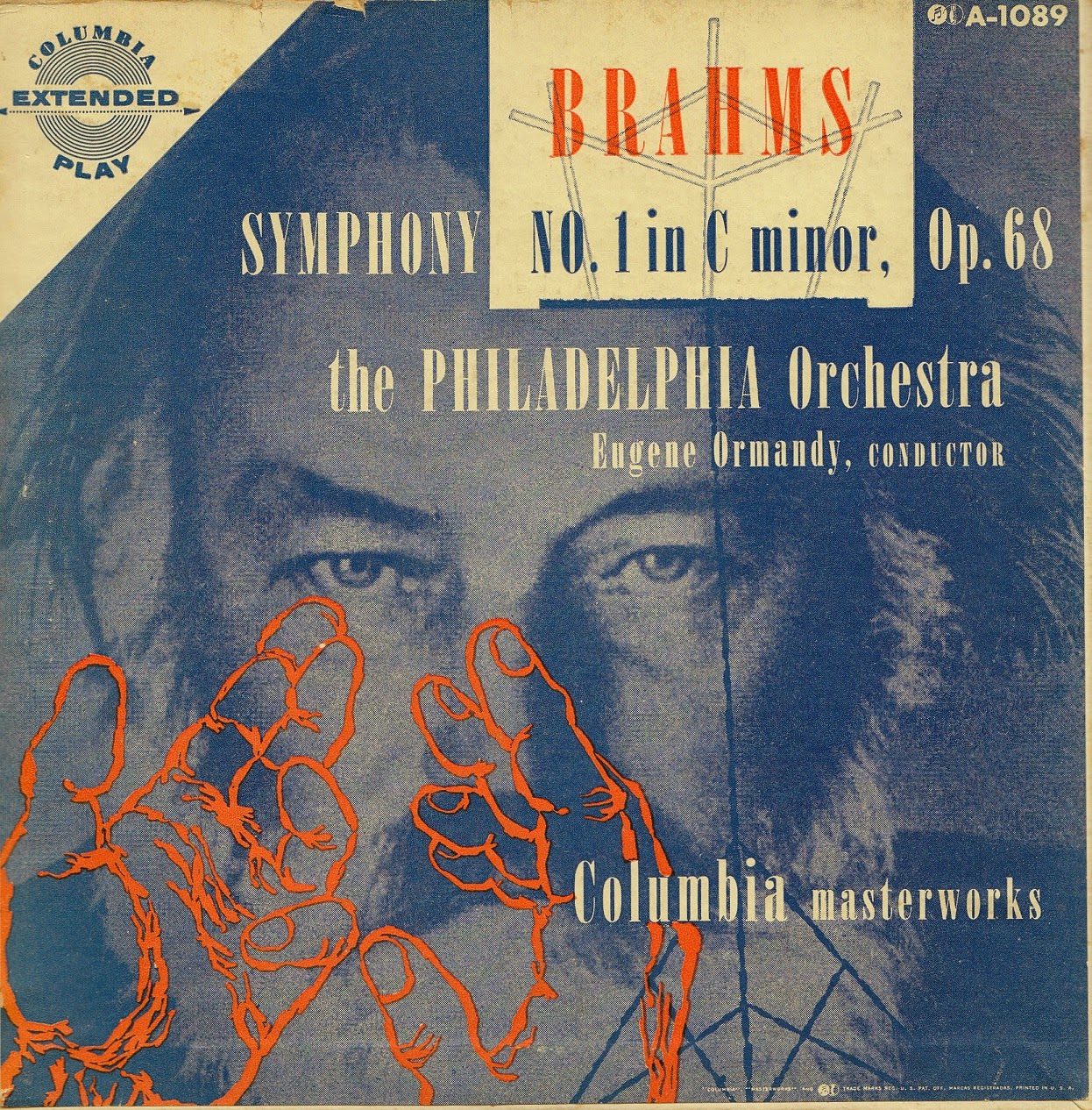 The Extended Play (EP) record, a 45-rpm record capable of carrying up to eight minutes per side of music, was introduced by RCA Victor in 1952, and other companies quickly jumped on the bandwagon, reissuing material in the new format.  Among these, strangely enough, was Columbia, who initially showed antipathy to the 45-rpm record - perhaps not surprisingly, since the company began marketing a 7-inch 33-rpm record for single issues at the same time as it put LPs on the market, and only began replacing these with 45s at the end of 1950.  Columbia's first EPs were all single-record issues of pops and short classical works, but during 1953 the company quietly reissued several dozen sets of the most popular symphonic, concerto and operatic recordings in its back catalogue on EP, including this one:

This was the first of three recordings that Ormandy and his Philadelphians were to make of this symphony; both of the others were also for Columbia, and in stereo.  This EP set may not be the optimal way to hear it - Columbia's 45-rpm records were manufactured from polystyrene rather than vinyl for almost their entire existence - and it didn't last long in the catalogue, but these classical EP sets are fun, and I've included the inner leaves of the triple gatefold cover, containing 4 pages of Columbia's EP advertising, as JPG files.
Posted by Bryan at 12:07 PM 2 comments: 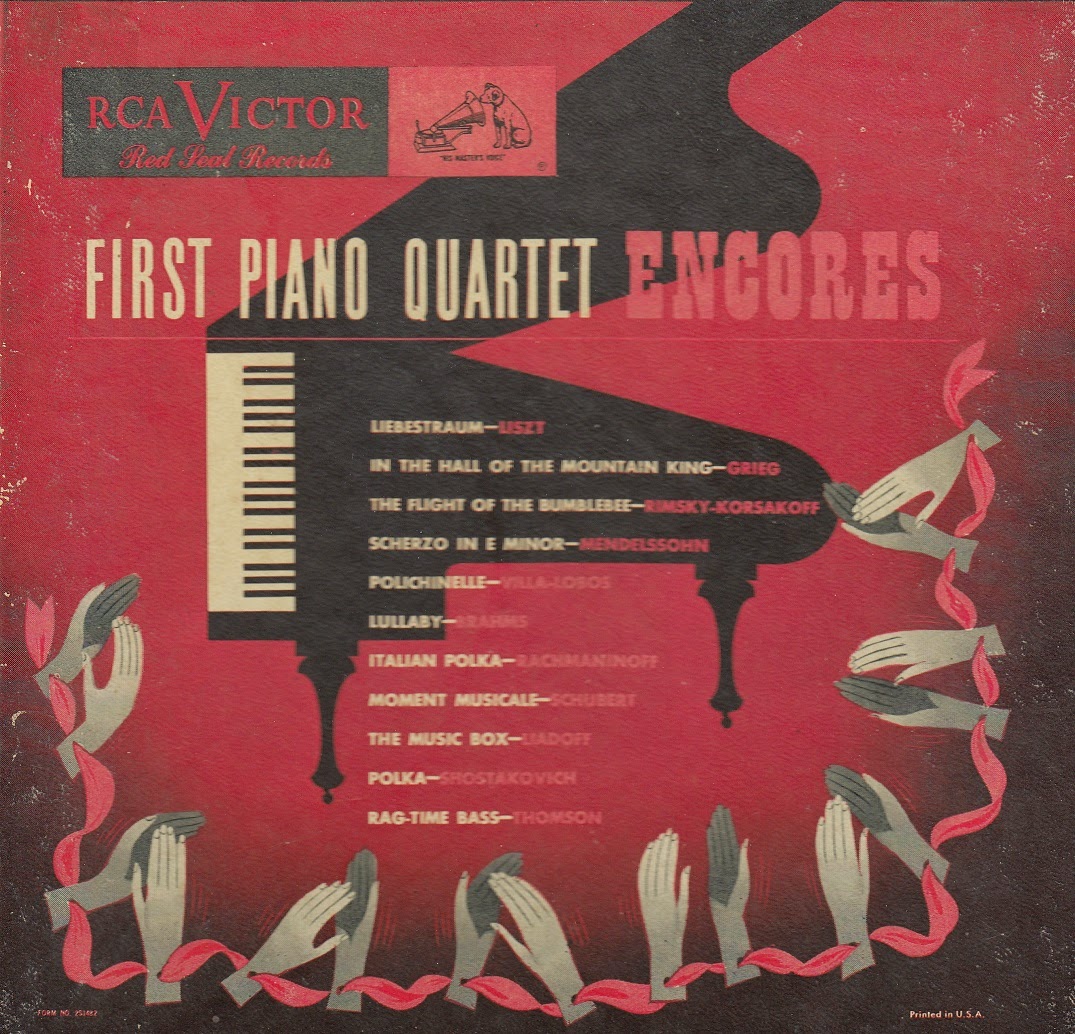 Founded in 1941 as a radio ensemble, the First Piano Quartet, consisting of four pianists - Vladimir Padwa, Frank Mittler, Adam Garner and Edward Edson - enjoyed great popularity during its first decade or so of existence. It's easy to understand why. Their arrangements, made by the players themselves, were great fun, were usually quite brilliant and were performed with a tightness of ensemble that made the four pianos sound almost like one super-piano. The music chosen, popular classics and semi-classics, made few demands on listeners' ears; the pieces never exceeded two 78-rpm record sides in length. When the "FPQ" began recording for Victor in 1946, the company initially didn't consider them Red Seal material, putting their first three single releases and their first album (a set of Lecuona favorites) in the black-label 46-0000 "Double Feature" series. By 1948 these had all been reissued with red labels, and all their subsequent releases appeared as Red Seals, including this, their third album:

The group's last RCA release was 1952's "FPQ on the Air" (LM-1227/WDM-1624), by which time Padwa had been replaced with Glauco d'Attili - the first of numerous personnel changes to the ensemble. A few EP reissues followed, but their recordings had all but vanished from the Schwann catalog by 1959, though the group continued to exist until 1972.
Posted by Bryan at 10:02 PM 9 comments:

This recording represents my first-ever exposure to the music-making of the great German violinist and quartet leader, Adolf Busch (1891-1952). I was thirteen when I obtained my first copy of this set at Clark Music in Decatur, Ga. (It wasn't part of the inventory when I discovered the store three years before, but as I gradually depleted the supply of classical 78 sets kept in the back of the store, Mrs. Clark would replace them with other goodies she had been keeping in her "warehouse," and this was one of those items.) I had heard of Busch and his Busch Chamber Players from old Columbia ads for their famous set of Bach's Brandenburg Concertos, but this was my first opportunity to actually hear them (it happened to be my introduction to this wonderful concerto as well), and I was hooked:

Tully Potter, who has written the definitive work on Adolf Busch (published in 2010 by Toccata Press), tells us that this recording followed the Busch Chamber Players' first American tour in the spring of 1945, which took them to 54 towns in 20 states (and Ontario). Many of the towns were out West, and many had never heard a live orchestra before. The orchestra numbered 27 players (including the 19-year-old Eugene Istomin as pianist in several concertos and for continuo work), of which 14 were women, including both horn players. The touring repertoire included this Mozart concerto as well as the following works which the orchestra subsequently recorded: the Bach Double Concerto (which Busch played with Frances Magnes as second fiddle), the Bach D minor clavier concerto (with Istomin), Dvořák's Notturno for strings, Busch's own arrangements of several African-American spirituals, Mozart's "Eine kleine Nachtmusik" and the 3rd Concert by Rameau. The last two works were, alas, never issued.
Posted by Bryan at 9:24 PM 6 comments: 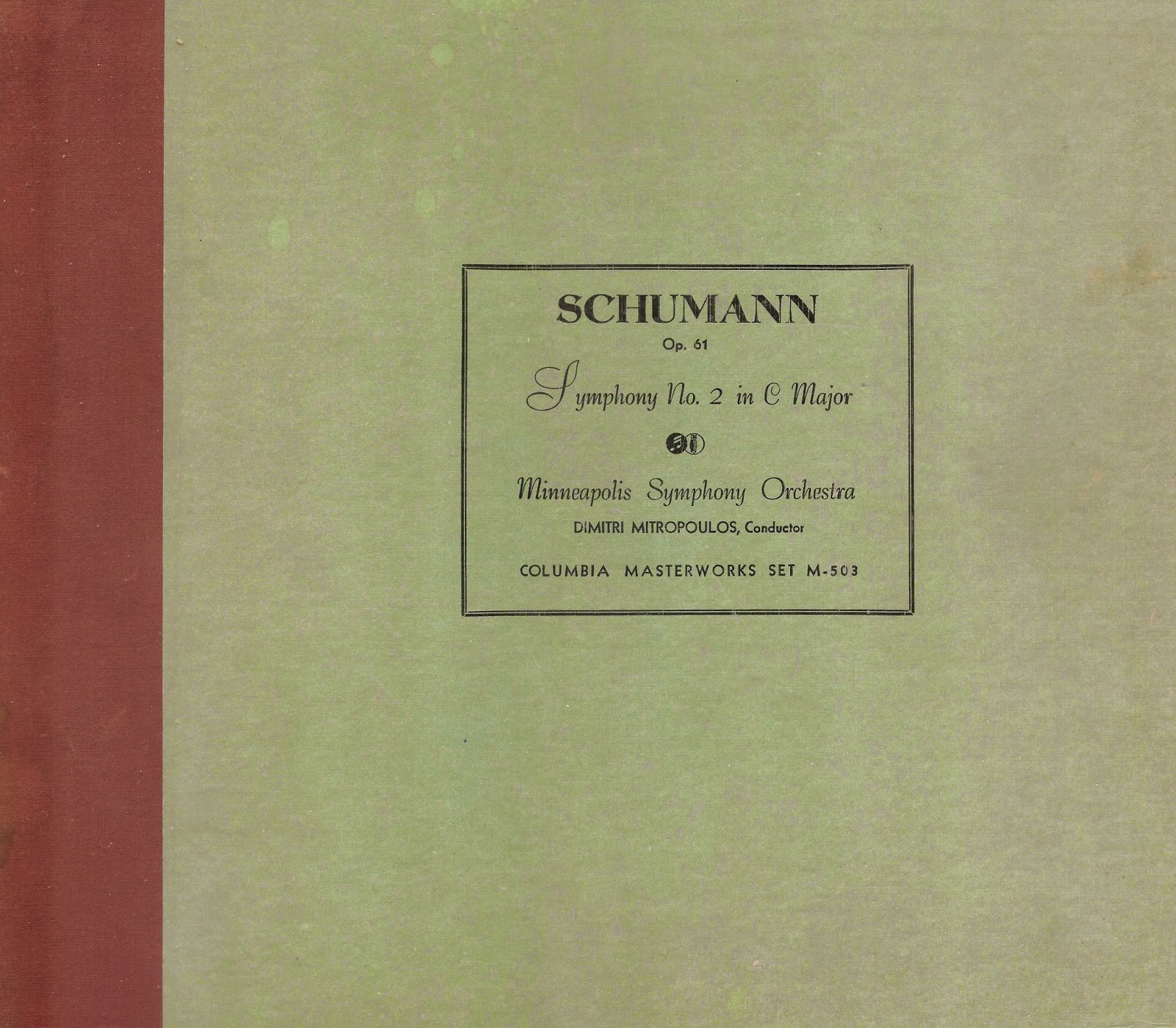 The Second Symphony of Robert Schumann has always been my favorite of his four, as it was, apparently, for Leonard Bernstein. Bernstein's "passionate identification" with the work (the quote is from Richard Burton's 1994 biography of Lenny) dated from the time he was an 18-year old student at Harvard, where, in January, 1937, he was part of a reception welcoming Dimitri Mitropoulos, who was in town to conduct two concerts with the Boston Symphony. Mitropoulos would became Bernstein's first mentor, in fact the first person to encourage him to become a conductor. The Greek maestro straightaway invited the young undergraduate to attend not only his concerts but all rehearsals as well, which Bernstein did, despite imminent mid-term exams. The second of these 1937 Boston programs featured a Mitropoulos specialty, Schumann's Second Symphony:

Mitropoulos' recording of this symphony was only the second to be made in America, and only the fourth worldwide - after acoustic and electric versions by Hans Pfitzner (both for Polydor), and this 1936 version by Ormandy (for Victor) which was its chief competitor during the 1940s.
Posted by Bryan at 2:17 PM 2 comments: