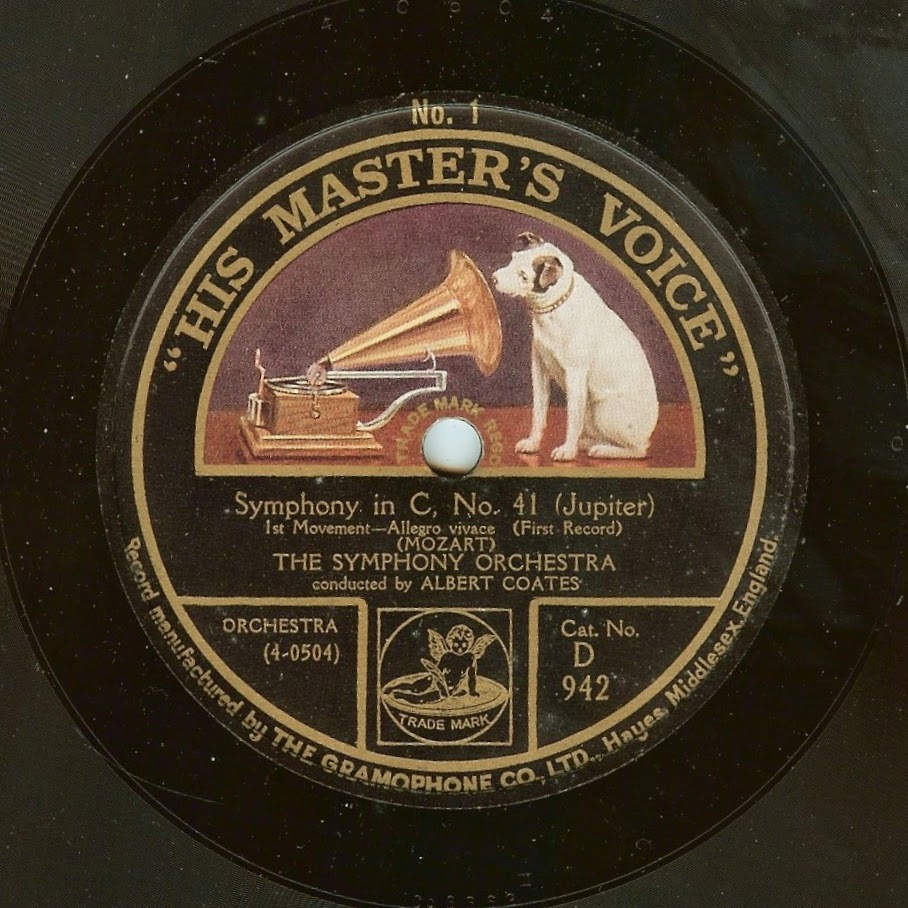 Last week we had Leopold Stokowski's 132nd birthday, and this week (April 23) we have the same for Albert Coates, that great gramophonic pioneer. And so I offer his first recording of Mozart's "Jupiter" Symphony (an electrically-recorded replacement succeeded it three years later). It isn't known whether it's the first complete recording of the work (an abridged one by the Victor Concert Orchestra had preceded it); the other contender would be a Deutsche Grammophon set conducted by Johannes Heidenreich, and since Deutsche Grammophon's recording ledgers were lost in the Second World War, we don't know when that recording was made. We do know that it was released in March, 1924, five months after the Coates version had been completed, but ten months before it actually appeared, having been held up by the need to record a suitable filler. (DG didn't bother about such niceties as suitable fillers - theirs was Richard Strauss conducting two movements from his "Bourgeois Gentilhomme" Suite!) What can be said about Coates' version is that it's probably the fastest on record - 28 minutes total, and that's with exposition repeats not only in the first movement and finale, but the slow movement as well, probably for the only time on 78-rpm discs for this particular symphony. (Had the repeats not been observed, the total timing would have amounted to only about 21 minutes.  Coates was well known for his speedy tempos.)

The First American Recording of an Unabridged Symphony 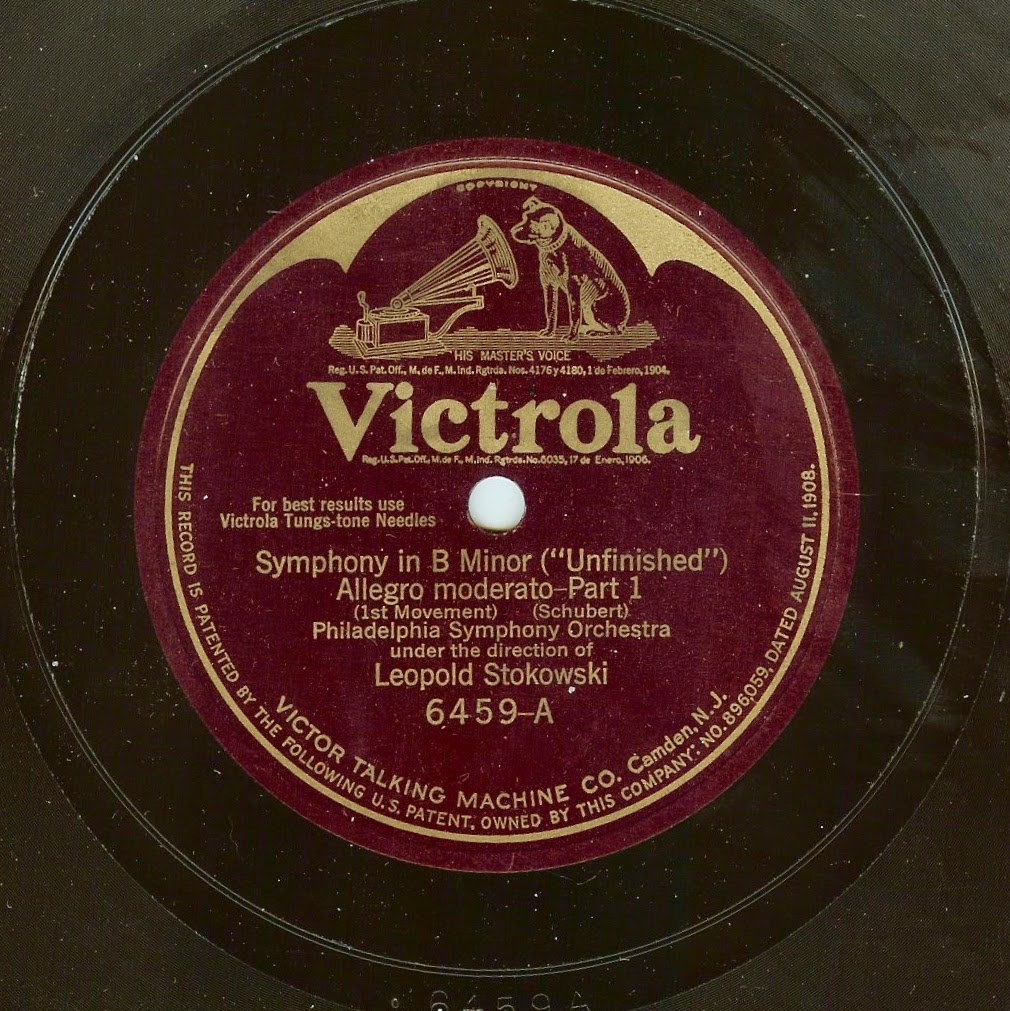 For Leopold Stokowski's birthday this year (April 18, 1882), I present what is not only his first recording of an unabridged symphony, but the first such recording anywhere in the USA, in fact the only American recording of an unabridged symphony made during the acoustical era.  (I say "unabridged" instead of "complete" because some may consider Schubert's "Unfinished" Symphony not to qualify as a complete work.  I don't agree with that assessment myself; I have always suspected that Schubert didn't finish it because he knew that it is perfect as it stands, and that to add the obligatory scherzo and finale to create a finished symphony would be akin to drawing a mustache on the Mona Lisa!)  The first five sides were waxed on Stoki's 42nd birthday (after apparently unsuccessful attempts the previous December and January), ninety years ago:

This set was Victor's first entry in a series of albums they called the "Music Arts Library of Victor Records" - issued in tandem with an abridged recording of the Schumann Piano Quintet as a five-record package.  Alas, I don't have the album or the Schumann, but I did find online a newspaper ad (from the Brooklyn Daily Eagle, dated October 9, 1924) announcing the series, and here is a cross-section: 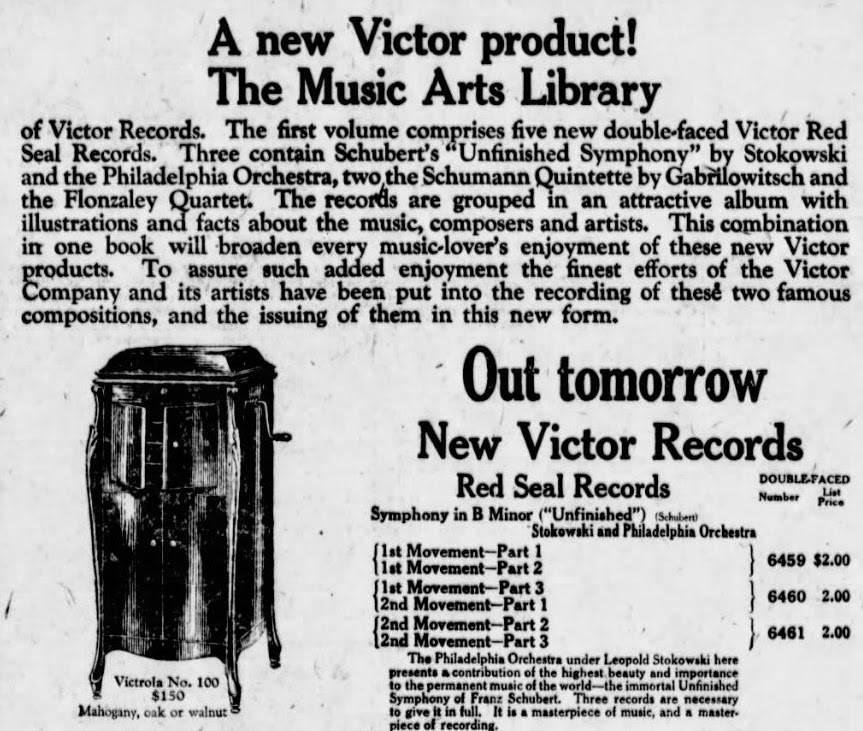 Victor's subsequent issues in this series included a number of Blue Label sets, among them Sir Landon Ronald's 1922 version of Beethoven's Fifth Symphony.  The series continued into the early electrical era before being supplanted by the much more famous "Victor Musical Masterpiece" sets in 1927.
Posted by Bryan at 11:04 PM 3 comments: 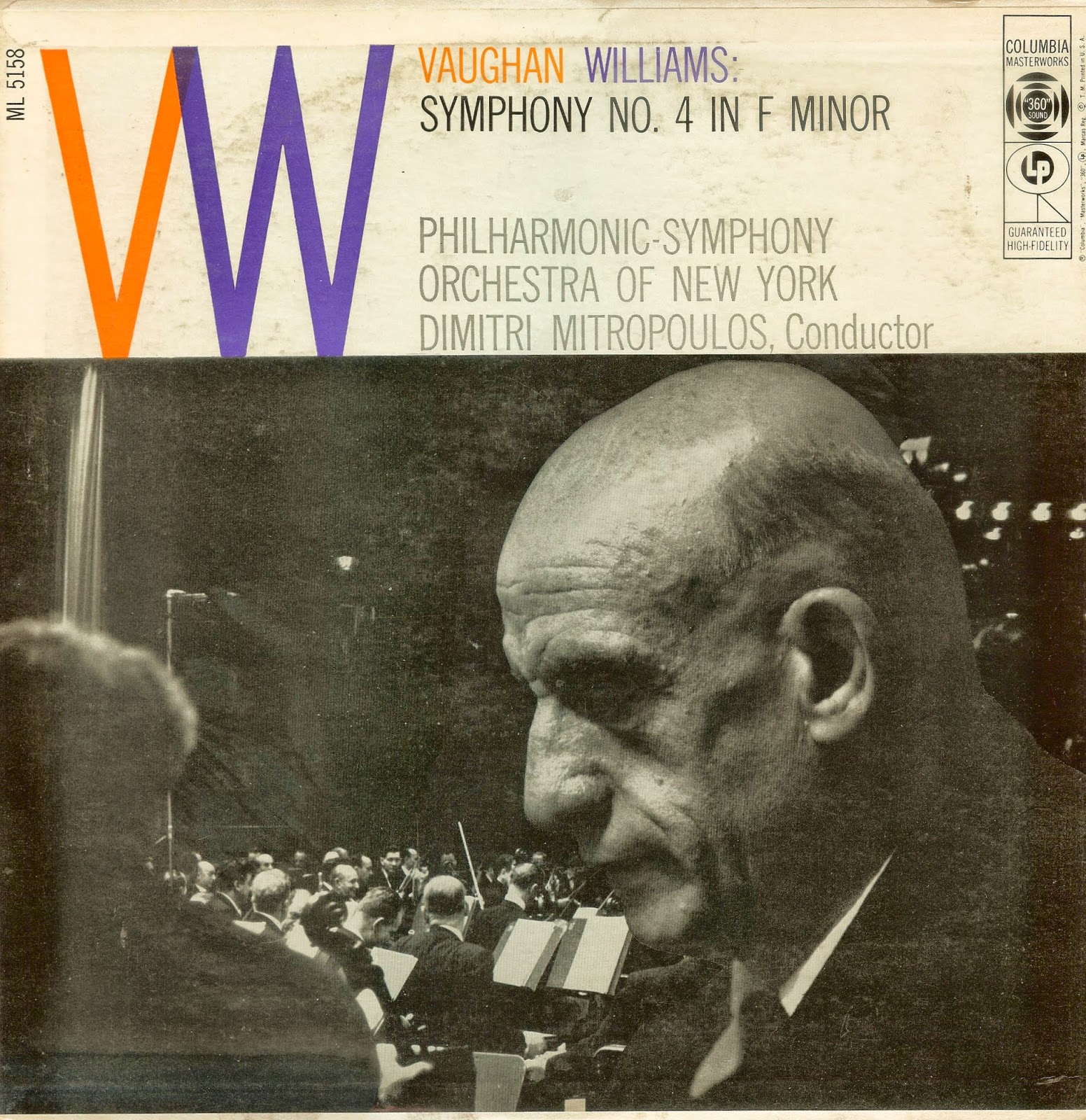 "Hold your Hat!" - These were the words inscribed inside the album cover for the first copy I owned of Vaughan Williams conducting his Symphony in F Minor by the 78 set's original owner. An apt description of the work's anger and violence, and also of the composer's 1937 performance, which has never been equaled. The only one I've ever heard that even comes close is the one presented here. This was, I believe, the only Vaughan Williams symphony in Mitropoulos' repertoire, and he had conducted the New York Philharmonic in at least sixteen performances of it, since 1945, at the time this recording was made:

Vaughan Williams liked to say that the dissonant opening motto of the Fourth Symphony was "cribbed" from the opening of the finale of Beethoven's Ninth. If that is so, the overall form of the symphony was surely cribbed from that of Beethoven's Fifth, with its motto recurring at strategic points, the similar dimensions of its movements, and even its Scherzo being linked to its Finale by a similar crescendo.
Posted by Bryan at 8:54 PM 5 comments:

Spring is finally here, and after such a winter as we have had in the USA - one of the coldest I can remember - it's doubly welcome. And so here is Schumann's "Spring" Symphony, conducted by a young Erich Leinsdorf (1912-1993) in what appears to be his only commercial recording of the work. This was made during his first appointment conducting a major symphony orchestra, that of Cleveland, a position Leinsdorf would later characterize as "the bridge between the regimes" of Rodzinski and Szell. He was there for only three years, and all of his recordings with the orchestra were made over a period of three days in February, 1946. These include first American recordings of Dvořák's Sixth Symphony, Rimsky-Korsakov's "Antar" Symphony, and a suite from Debussy's "Pelléas et Mélisande" - the latter two sets released belatedly, after five Cleveland sets conducted by Szell had hit the market. The first of Leinsdorf's Cleveland recordings to be issued was the Schumann:

Curiously, neither the cover nor the record labels indicate the symphony's familiar nickname, even though it originated from the composer himself - as discussed in Paul Affelder's liner notes. The Steinweiss cover does, however, graphically portray the transition from winter to spring.