The First Electrical Recording of a Bach Concerto? 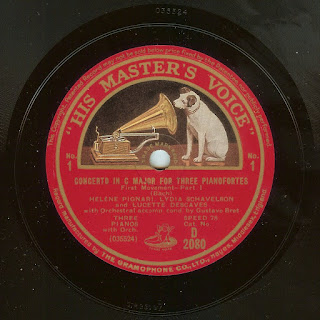 As I mentioned several weeks ago, I have lately discovered the online treasure-trove of the Phonograph Monthly Review magazine (1926-1932). I have been methodically plodding through this, issue by issue, and am about halfway through the run. One of its features was R. D. Darrell's monthly "Recorded Symphony Programs" - an overview of recorded orchestral works one might likely encounter in concert, with the aim of allowing the reader to recreate such a concert at home by means of records. The issue for April, 1928, gives an overview of orchestral recordings of Bach, and notes that Harriet Cohen's acoustical recording of the D minor concerto (BWV 1052) is the only "Bach piano concerto" yet recorded. Moreover, all the other Bach concertos (for violin) listed were acoustical recordings. In the very next issue, in the very same feature, mention is made of this French HMV recording of a concerto for three pianos, as having just been released:

My copy, however, is from an English issue of five years later. Of the three pianists involved, I can only find out information online about Lucette Descaves (1906-1993), a pupil of Marguerite Long who went on to teach Pascal Rogé and Jean-Yves Thibaudet, among others. The name of Hélène Pignari (sometimes billed Pignari-Salles; I assume she married a Monsieur Salles at some point?) comes up sometimes in connection with recordings in partnership with violinist Louis Kaufman for Concert Hall, but of Schavelson I can find out nothing. If anyone out there knows anything more about these two ladies, please comment! The conductor, Gustave Bret (1875-1969) appears to have also been an organist and composer with a particular interest in Bach. In 1933 he directed a recording of the Vivaldi-Bach concerto for four keyboards (with Pignari again as one of the pianists) for French HMV, which can be heard at the CHARM website.

Thanks also to PMR, I have new information about this recording of the Bach Double Concerto by Anton Witek and his wife - apparently it was made at Bayreuth in 1928; for further details see my update to that post.
Posted by Bryan at 2:52 PM 6 comments:

This is a recording that I had meant to upload last year for Hindemith's 120th birthday (he was born November 16, 1895), but I got rather busy and in the end, the only composer anniversary I celebrated last autumn was Sibelius' 150th. Well, what's a year between friends? And so, for Hindemith's 121st birthday on Wednesday, here is his fellow viola player, the incomparable William Primrose, in his first sonata for the instrument:

Hindemith's Opus 11 consists of no less than six sonatas, all written in 1918-19, for various stringed instruments with and without piano.  The first two are violin sonatas with piano, the third a sonata for cello and piano, the fourth for viola and piano, the fifth for viola unaccompanied, and the sixth (unpublished during his lifetime) for violin unaccompanied. He was to add further examples of each combination to his oeuvre, the viola being particularly favored with three accompanied and four unaccompanied sonatas in total.

This is the first of three recordings pianist Sanromá would make of Hindemith's music for Victor during the late 1930s; in the spring of 1939 he would join the composer for recordings of a sonata for piano duet and of the third accompanied viola sonata.
Posted by Bryan at 8:47 AM 3 comments: