Wednesday marks the 104th anniversary of the birth of Benjamin Britten (born November 22, 1913). As a young man in his early 20s he had achieved a certain celebrity, principally as a resourceful composer for documentary films, but it remained localized until this work, and this recording of it, brought him international fame:

This is Britten's first work to be generally recognized as a masterpiece, written to Boyd Neel's commission for a 1937 appearance at the International Society of Contemporary Music Festival in Salzburg. The ISCM requested that Neel bring a new work by an English composer, and Neel despaired of finding one on short notice until he thought of Britten's high-quality (and speedily written) film work, some of which he had conducted in the studios. Neel's hunch that the young man might quickly furnish a worthwhile score was amply repaid. Britten's initial draft of the Bridge Variations was sketched in ten days, and four weeks later the piece had been fully scored - "one of the most astonishing feats of composition in my experience," said Neel.

This set was reviewed in the November, 1938, Gramophone Shop Supplement (in which it was offered for sale at $7,25, including album). "The discs are the first example of [Britten's] work to reach this country," said the anonymous reviewer. "The principal shortcoming of the present work is the inclusion of genre pieces like the Aria Italiana and Wiener Walz, very cleverly turned out but definitely lessening the effect of the remarkable Funeral March, Chant and Fugue. There is some remarkably powerful and eloquent writing in these last sections, writing that on first hearing mark Britten as a man to be watched. The whole work is an unusually attractive and interesting example of contemporary music on discs, and its best pages are an indication that not only Britain but the world has a highly significant new force to reckon with." Quite a prescient review, although I can't agree with the assertion that the lighter sections constitute shortcomings!
Posted by Bryan at 12:23 PM 5 comments: 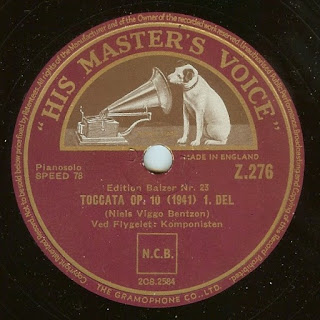 As my last post featured 20th-century Danish piano music, so does this one, but what a contrast in styles! I had really hoped to offer the two composers together, but with the demands being made on my time lately, it simply wasn't to be. In any event, if Jørgen Jersild's influences were primarily French, those of his contemporary, the somewhat better-known Niels Viggo Bentzon (1919-2000), were undeniably Teutonic. Here are three early examples played by the composer (and an extra, played by an associate):

The craggy Toccata was Bentzon's calling card as a young composer; he achieved his first success with it. It is that singular anomaly, a toccata in adagio tempo. This is, in fact, its second recording, replacing one issued under the same number in 1942. The equally craggy five-movement Partita recalls Baroque models in its title only, for the work makes full use of modern piano techniques, with numerous passages written in four staves! The Third Sonata is somewhat more conventional, and bears a dedication to Georg Vásárhelyi, Bentzon's piano teacher and a co-soloist on the recording of Bentzon's Chamber Concerto that I posted three years ago. Bentzon ultimately composed an astonishing 31 piano sonatas (one has to wonder, was he trying to outdo Beethoven?), and the first one remained unfinished. All that was published of it is the Concert Etude that appears as a filler to the Partita.
Posted by Bryan at 4:56 PM 6 comments: