Hindemith from the Recording Horn Happy May Day! Some fifteen months ago, when I uploaded the Los Angeles Wind Quintet's recording of Hindemith's delightful Kleine Kammermusik, I expressed the hope that I might someday be able to hear the work's first recording, an acoustical version by the Leipzig Gewandhaus Quintet, anachronistic as that may seem. (It was one of Polydor's very last acoustical recordings.) Well, my wish has been granted, for a copy has recently come my way, and you, my loyal audience, get to hear it too:

The performance is very good, especially considering that the work was written (and published) a mere three years before this recording was made, and its idiom would have been equally new to the Leipzig players - who, Jolyon tells us (in connection with his very welcome upload of their recording of August Klughardt's Quintet), were Carl Bartuzat, flute; Walter Heinze, oboe; Willi Schreinicke, clarinet; Gunther Weigelt, bassoon; and Richard Schaller, horn. Only Bartuzat's year of birth is known for sure, and he was thirteen years older than the composer. This was the first recording of a work by Hindemith in which the composer himself didn't actually perform, and the playing, like Hindemith's own, is spirited and in certain spots a bit rough-and-ready. Enjoy!
Posted by Bryan at 11:55 PM 6 comments: 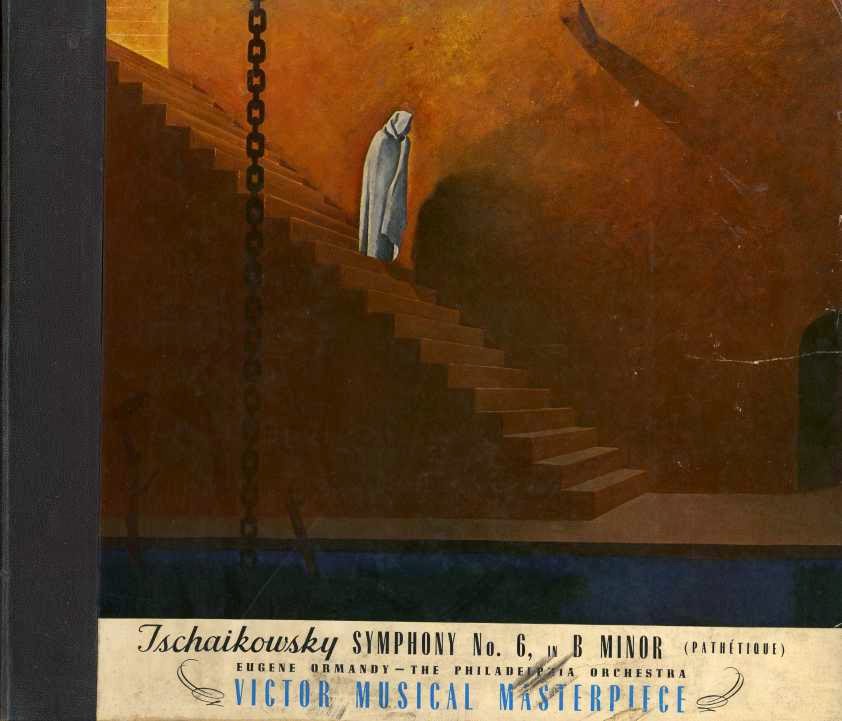 In 1937, the name of Leopold Stokowski must have seemed inextricably bound with that of the Philadelphia Orchestra, as far as record buyers were concerned, for it had appeared so for nearly 20 years on Victor Records. The set I present today heralded a new order, for it was the first-issued recording by the Orchestra under its new music director, Eugene Ormandy (he and Stokowski were actually co-conductors there during his first two years), just arrived from Minneapolis:

This recording, as well as that of Schumann's Second Symphony, was made during Ormandy's first two sessions with the Philadelphia Orchestra, the first two of over 400 sessions he would undertake with them over the next 46 years. Information about these comes from a marvelous new volume by Richard A. Kaplan, "The Philadelphia Orchestra: An Annotated Discography" - published just this year by Rowman & Littlefield. Kaplan believes that the Philadelphia Orchestra's move to Columbia in 1943 was more than anything else a strategic move on Ormandy's part, and indeed the evidence shows that Victor was not particularly interested in promoting him. Stokowski continued to record with the Orchestra through 1940, even after Ormandy had become the sole music director, and then there was Toscanini's ill-fated series of sessions with the Orchestra in 1941-42. Small wonder that Ormandy jumped at the chance to move to Columbia, where he quickly became the star attraction.

The evocative cover design pictured above was not original to the set, but a wartime reissue. I have borrowed the image from Ken Halperin's marvelous site Collecting Record Covers, for my own copy of DM-337, a slightly worn pre-war edition, has a generic cover.
Posted by Bryan at 2:07 PM 4 comments: 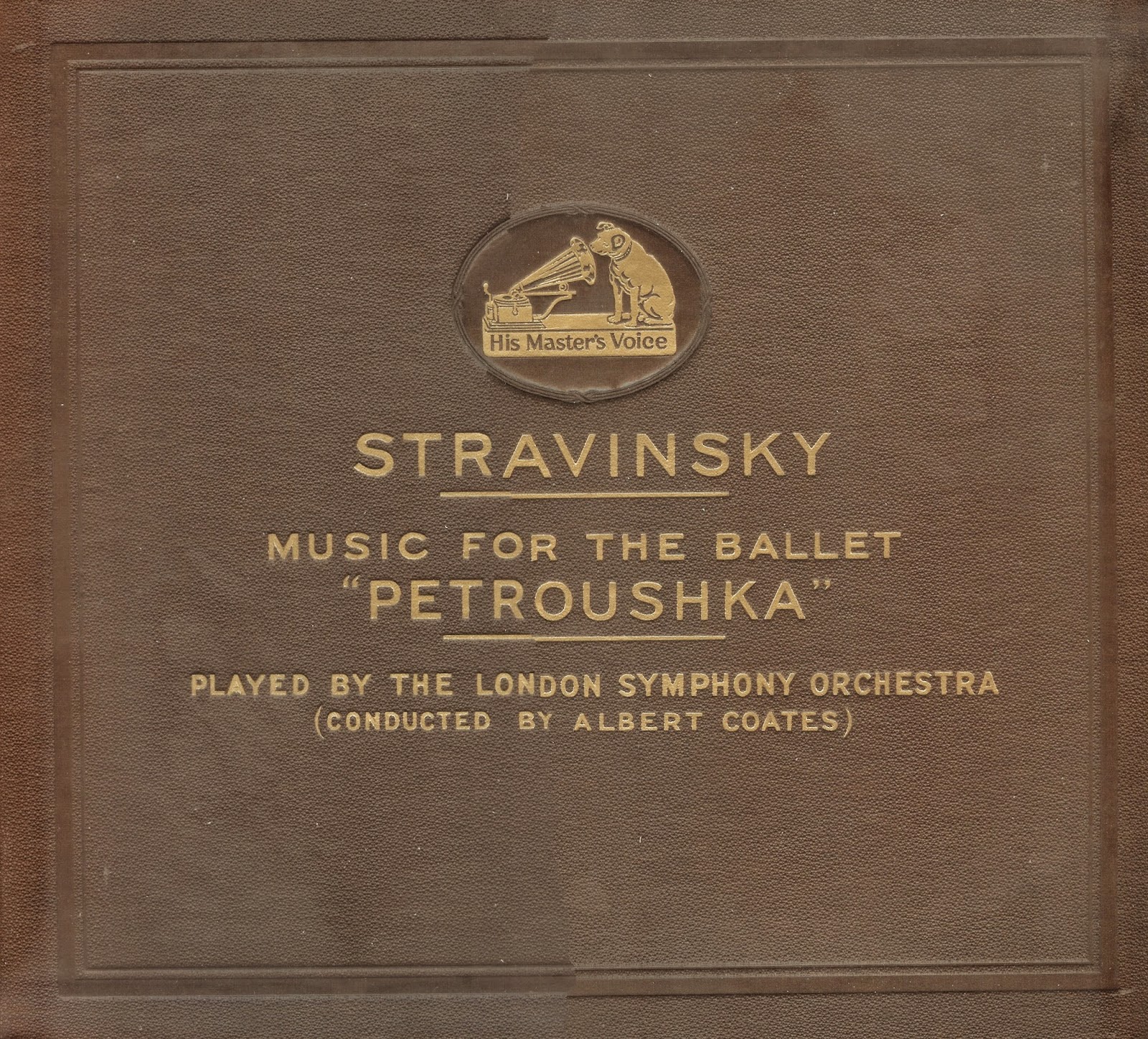 Another Albert Coates birth anniversary is upon us (April 23 - Thursday, this year), so for this week I present his version of Stravinsky's Petrouchka. This is only the second recording ever made of that great ballet; Eugene Goossens' pioneering acoustical version with the Royal Albert Hall Orchestra, which Satyr has available, was the first. Coates' recording would have been intended to replace it, of course:

It's worth noting that this is one of the few Coates recordings made by HMV that did not get issued in the USA by Victor - an honor that even most of his acoustical recordings enjoyed. I presume that is because Koussevitzky recorded the Suite from Petrouchka at about the same time, as his first recording with the Boston Symphony, and Victor considered the Coates set, complete though it was, superfluous. (Victor had issued the Goossens recording in 1925.)
Posted by Bryan at 10:55 AM 8 comments:

This Friday, April 17, marks the 112th anniversary of the birth of one of the greatest cellists of the 20th century, Gregor Piatigorsky (1903-1976). For a musician of his stature, he left far too few solo recordings - a handful for German Odeon in the late 1920s, all of short pieces, and a somewhat more substantial batch for HMV in the 30s (including a Beethoven sonata with Schnabel, and a Brahms with Rubinstein). But it wasn't until the 40s, when he came to America, and signed on with Columbia, that more of an effort was made to commit his repertoire to disc. These two sonata recordings are among the fruits of that association:

Almost twice as much music was recorded by Piatigorsky for Columbia as was actually released. There were unissued versions of the Grieg, Debussy and Barber sonatas - this last-named, Columbia actually went so far as to assign a set number for (MM-737), and both Piatigorsky and Barber were eager to have it released. My guess is that a suitable filler side could not be agreed upon. These sonata recordings finally saw the light of day in 2010, with the issue of a six-CD set by West Hill Radio Archives, a set that is indispensable for lovers of Piatigorsky's art, and which, when last I checked, was being sold at Berkshire Record Outlet at a reduced price.
Posted by Bryan at 2:03 PM 2 comments:

For Easter weekend, and in celebration of Leopold Stokowski's birth month (April 18, 1882), I present one of Stoki's more controversial interpretations, that of Rimsky-Korsakov's 1888 Russian Easter Overture. Controversial, because it features one of his many retouchings of orchestral scoring - and this in a work by a composer renowned for his mastery of orchestration! In this case, an anonymous male voice substitutes for a trombone in the recitative-like middle section, singing words of the Russian liturgy:

This brilliant piece must have been particularly dear to Stokowski, for he recorded it no less than four times - in 1929 with the Philadelphia Orchestra; the present version; in 1953 with "his symphony orchestra"; and in 1968 with the Chicago Symphony. The 1953 recording also uses the voice-for-trombone substitution; there, the singing is credited to bass Nicola Moscona. (Moscona can be heard on this recording of the Beethoven Ninth Symphony.)

A happy and blessed Easter to everyone!
Posted by Bryan at 1:18 PM 3 comments: