Szell and the Budapest Quartet

George Szell (1897-1970) made his international reputation as the music director of the Cleveland Orchestra via his recordings for American Columbia (and through their subsidiary, Epic), but, at the time the recording I present here was made, that was all in the future.  His career with American Columbia actually began as a pianist, with members of the Budapest Quartet, in the two piano quartets by Mozart, of which this was the first to be released:

By the time this release appeared, early in 1947, Szell had already begun making recordings with the Cleveland Orchestra, two of which were actually issued before the other Mozart piano quartet was.

Sorry to be away for so long, but most of my free time this month has been spent glorying in the new Mercury Living Presence CD box which I decided to spring for earlier this summer.  It's also given me a couple of ideas for future transfers...
Posted by Bryan at 3:01 PM 2 comments:

Hanson and Piston by Hanson 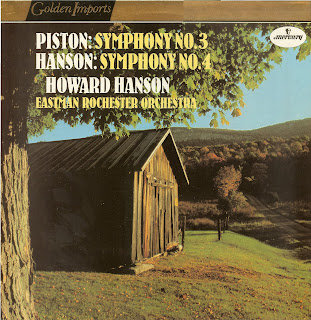 Just in time for the Fourth of July, a couple of Pulitzer Prize-winning symphonies which are utterly different from each other, and therefore complement each other nicely.  Piston's, which received the 1948 Pulitzer, is yet another of those "Great American Third Symphonies" (a phenomenon started by Roy Harris, and continued by William Schuman and Aaron Copland) and seems to me one of the finest of his eight, with a spiky scherzo that makes one regret he didn't write more symphonies with scherzos (only Nos. 4 and 6 also have them), which fits into an overall slow-fast-slow-fast four movement pattern of the type that had been recently been popularized by Shostakovich and Prokofiev in their Fifth Symphonies.  Hanson's Fourth, the 1944 Pulitzer winner, has the exact opposite pattern, and is cast as an orchestral Requiem "In Memory of my beloved Father." (Had he taken the idea from Britten's "Sinfonia da Requiem"?)  The Sibelian echoes are very strong here, but even so this strikes me as the finest of Hanson's symphonies among those that I've heard (which is all of them except Nos. 5 and 7), and of course the performance is authoritative.

This LP is a reissue from the late 1970s, one of about 150 reissues pressed by Philips in the Netherlands of Mercury Living Presence material.  It was, unfortunately, "enhanced" with fake stereo, even though this had become passé by the 70s, and naturally I have "monoed" it back again in this transfer.  As far as I am aware, neither of these recordings has ever appeared on CD; they were not part of the slew of Mercury Living Presence CD reissues produced in the 1990s, although they certainly should have been.
Posted by Bryan at 9:09 PM 2 comments: