My exploration into Danish music continues with a magnificent piece of chamber music by Dietrich Buxtehude (c. 1637-1707). Actually, Buxtehude spent most of his career in what is now Germany - in the town of Lübeck, where, towards the end of his life, the 20-year-old J. S. Bach walked 250 miles from Arnstadt in order to be able to learn from him. So his music is squarely in the German Baroque tradition, but the Danes have always claimed him as their own, and rightfully so, for all of his training was in Denmark. And in the dark early days of the Nazi occupation of Denmark, four Danish musicians committed to disc this sonata by their compatriot, one of 22 that survive:

Wöldike is by far the best-known of these musicians, and I'm sure his was the guiding spirit behind this performance, with his well-known qualities as a Baroque scholar. Koppel and Bruun were husband and wife, and Medici, despite his Italian-sounding name, appears to have spent his entire career in Denmark; he was principal cellist for the Danish Radio Orchestra for several decades. (Satyr has another recording featuring Elsa Marie Bruun, with Wöldike conducting - the Bach Concerto for violin and oboe.)
Posted by Bryan at 12:48 PM 2 comments:

Another one by Ormandy and his "Fabulous Philadelphians" is the offering this week, and it doesn't feature offbeat repertoire or even anything particularly exciting, perhaps - just enjoyable music superbly played. Except for the first Peer Gynt Suite, which he had recorded in 1947, these recordings represent Ormandy's first of these works, which make an odd but satisfying coupling:

On a personal note, this was my introduction to Bizet's L'Arlesienne music; when I was 11, I obtained the EP version of this recording of Suite No. 1, which, incidentally, had the same cover photo. I haven't had that 45 for at least thirty years, but I remember that the turnover occurred in the middle of the Minuetto - even though neither the cover nor labels for A-2038 bothered to identify the movements!

This was another of Columbia's 1950s LPs to be reissued with a different cover; around 1958-59 this nature scene replaced Ormandy's visage above (photo borrowed from discogs.com): 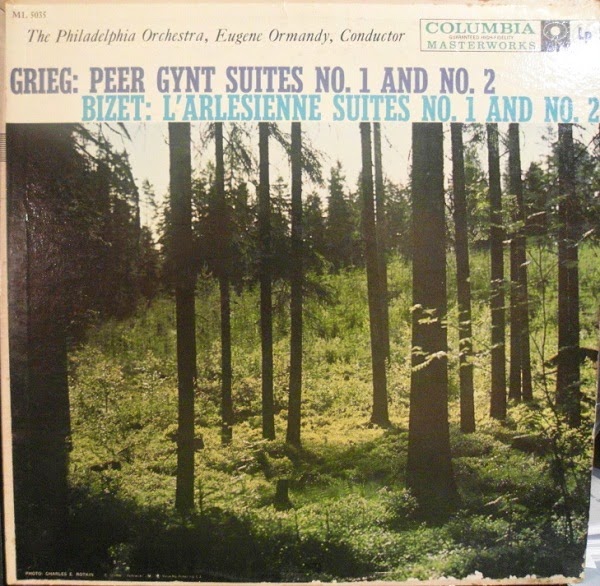 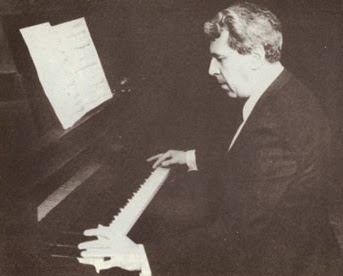 About a year ago, when Berkshire Record Outlet put on sale a number of Albany Records CDs on sale at ridiculously low prices ($0.99-1.99 per disc) I bought a handful of them. Among these were three discs of piano sonatas by Boris Tishchenko (1939-2010) performed by Sedmara Zakarian Rutstein. I knew of Tishchenko as a composition pupil of Shostakovich, whom the master thought very highly of, but I had never heard his music before. Well, Shosty was right - I was blown away by the quality of the music I heard. It is bold, direct, displays a firm grip of musical architecture, and enough variety to sustain interest over works lasting nearly an hour. I was moved to obtain the scores of the sonatas represented on the Albany CDs (Nos. 5, 7 and 9), and to seek out the composer's own performance of No. 7 on a Melodiya LP made shortly after the work was written:

The bells, which are of a different type in each of the sonata's three movements, are not heard continuously, but appear at strategic points - in the slow movement's climax, for example, and at the opening and closing of the first movement.

Berkshire, when last I checked, still has their Tishchenko CDs in stock, and if this music has intrigued you I would urge you to acquire them. And the scores, published by Compozitor Publishing House in St. Petersburg, can be obtained outside Russia via the Ruslania website.
Posted by Bryan at 12:50 PM 2 comments:

Perhaps no musician in the 20th century was more responsible for generating interest in the vast repertoire of music for chamber orchestra than London-born Boyd Neel (1905-1981). Trained as a doctor, he yearned to conduct, and to this end formed the Boyd Neel String Orchestra in 1933 by recruiting seventeen string players - 11 violins, 2 violas, 2 cellos and 2 basses - from various London music schools. From 1934 the orchestra recorded copiously for English Decca, including the complete Handel Op. 6 concerti grossi, and gave a boost to young Benjamin Britten's career by commissioning (and recording) his first recognized masterpiece, the Variations on a Theme of Frank Bridge. The war years curtailed their activities a bit, but not completely. One of their first recordings after Decca's introduction of the "ffrr" recording technique was this charming 1892 Serenade by the eighteen-year-old Josef Suk, composed under the influence of his mentor Dvořák:

This is one of about 120 sets imported into the USA and issued in an album series (the records made in England, the albums manufactured in America) between early 1947 and mid-1949 by American Decca, Late in 1947, British Decca began importing its popular series directly to the USA on the London label, then by May of 1948 was importing semi-classical (Léhar, Eric Coates, and the like) 12-inch issues here on London even as American Decca was importing the heavier classics! A May 1, 1948, article in Billboard magazine states that "according to a London spokesman, the [new semi-classical] series will in no way conflict with the deal between London's parent firm (English Decca) and American Decca for the latter to distribute English Decca classical wax here exclusively." But American Decca must have seen the handwriting on the wall, for the beautifully designed covers they had been using for the EDA series (samples of which can be seen here and here) soon gave way to more generic ones like the one pictured above. By the summer of 1949 London Gramophone Corp. (as it was then called) was importing all English Decca product, including the new LPs.
Posted by Bryan at 12:04 PM 2 comments: