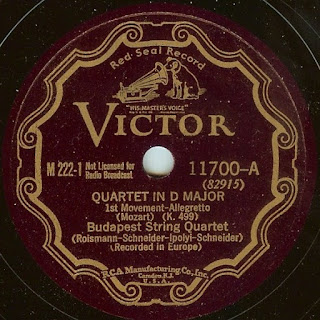 As I have mentioned before, this year I came into possession of four or five Budapest Quartet sets from the ensemble's vintage period (1933-35) in superb early Victor pressings. Here is one of those, a Mozart recording from 1934:

It's interesting to note that the records of this set were issued in Victor's lower-priced 12" Red Seal series (9000 and up), priced at $1.50 per disk, as opposed to the $2 series (6000 and up, skipping to 14000 when 8999 was reached). Only in 1935 did the Budapest Quartet "graduate" to the higher-priced series; of course, such distinctions were erased when, in 1940, Victor dropped the price of almost all Red Seals to $1 per 12" record. (The exceptions were the operatic ensembles - Lucia sextets and Rigoletto quartets - which remained $3.50 as before.)

My best wishes to everyone for a Merry Christmas and a safe, prosperous 2016!
Posted by Bryan at 6:15 PM 11 comments: