This is something that I should really have saved for Stokowski's birthday in April, but I simply couldn't resist posting it on this eve of Inauguration Day. A posting containing Stokowski's theatrical "symphonic synthesis" of the best-known, and greatest, musical work about a political figure (and not only that, but a political figure whose legitimacy to rule was widely questioned), seemed only too apropos. And this is the closest you will find me coming to making political commentary on this blog, for, as Charles Schulz said, when asked why he wouldn't make his "Peanuts" comic strip a vehicle for politics, "why would I want to offend fifty percent of my readers right off the bat?" With that in mind, I hope you will enjoy the music:

Speaking of Columbia, I have recently completed compiling a numerical listing of their records in American Columbia's celebrity "-M" suffixed series (1925-1954), which I am making available as a PDF file here:

Also, I am making available a copy of the Music Lovers' Guide from March, 1934. This magazine, edited by Axel B. Johnson, is the successor publication to the Phonograph Monthly Review, and eventually morphed into the American Music Lover and then the American Record Guide, which still flourishes. Until that happy day when a complete run of the Music Lovers' Guide is available online, this single copy will give you an idea of what the magazine was like: 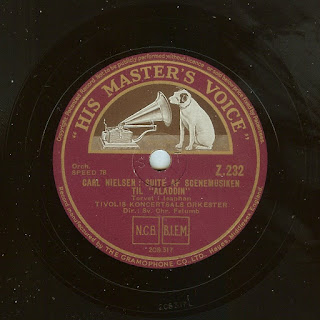 This week I present what appears to be the first recording of an orchestral work of Carl Nielsen to occupy more than one record (perhaps, even, more than one side) - five movements from his 1919 incidental music to Adam Oehlenschläger's "dramatic fairy tale" Aladdin. It isn't a work of blazing importance in his oeuvre, perhaps, but it is a lot of fun, and has all the quirkiness I find to be characteristic of Nielsen's music. Outstanding is the section entitled "Torvet i Ispahan" (The Market Place at Ispahan), in which four different sections of the orchestra play simultaneously at different speeds! It's conducted here by Svend Christian Felumb (1898-1872) who, one week before this recording was made, played oboe and English horn on the seminal recording of Nielsen's Wind Quintet.

Finn Viderø at the Compenius Organ

Happy New Year! Here, without further ado, is the companion album for the Finn Viderø set I posted a few weeks ago, made by HMV for the Gramophone Shop in New York, a selection of 16th and 17th century music played on the oldest organ in Denmark, built by Esaias Compenius in 1610:

There were nine of these special albums produced by the Gramophone Shop, which, for some reason, began their numbering at Album 2 and went up through Album 10.  Here is a list of these:

All of these were recorded and manufactured by HMV except the Purcell Suites, which were American-made and pressed in vinylite. No indication is given as to who produced them, though my guess would be American Decca, given that Sylvia Marlowe would later record extensively for that label.
Posted by Bryan at 3:47 PM 4 comments: