As a sort of appendix to my post earlier this week of my listing of Victor Musical Masterpiece sets, I present listings of four contemporaneous classical and semi-classical series.  These are:

1) The Concert Series (C-1 to DC-45), a semi-classical line featuing many Gilbert & Sullivan sets;
2) The Black Label Classics (G-2 to DG-32), begun in 1940 as a cheap classics line, but which morphed into yet another semi-classical series;
3) The "Victor Showpiece" Sets (SP-1 to SP-16), a short-lived series of two-record sets presented in colorful gatefold paper folders; and
4) The "Red Seal Deluxe" Sets (V/DV-1 to V/DV-30), classical sets pressed in red vinyl.

As with the other listings, this is downloadable as a PDF file:

Email ThisBlogThis!Share to TwitterShare to FacebookShare to Pinterest
Labels: Discography

The First Recording of a Bach Orchestral Suite, via the Library of Congress 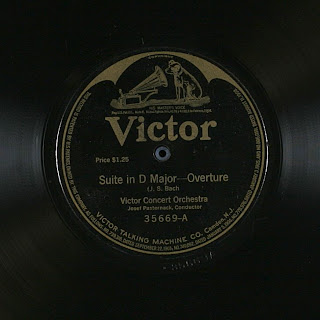 I have only within the last 24 hours discovered the joys of the Library of Congress' "National Jukebox."  Despite the rather appalling name, the "National Jukebox" is a treasure trove of early recordings, which can be streamed, but not downloaded - though the playlist feature enables one to hear the streamed recordings in any order one wishes.  At present some 10,000 sides are available, most if not all of them Victor recordings from the acoustic era.  I have taken advantage of the playlist feature to create a playlist containing what seems to me, as a devout Bachoholic, to be one of the most important recordings on the website - that of the Bach Orchestral Suite No. 3 in D, BWV 1068, recorded in 1917 by the Victor Concert Orchestra under Josef Pasternack (though, apparently, Rosario Bourdon actually conducted the last of the four sides).  This is the first recording of a Bach orchestral work with pretentions to completeness, or at least the first Bach orchestral work recorded by an orchestra (since the famous 1915 Kreisler-Zimbalist recording of the Double Concerto, also accessible through the website, was accompanied by a string quartet).  The Overture is cut to fit one side - twelve bars are cut from the end of the fast section and the final slow section isn't played - but the remainder of the work is complete, even to the repeats.  A fascinating glimpse into how Bach was played a hundred years ago - when Bach was played at all!  This was very unusual repertoire for the time.

Link to Library of Congress playlist
Posted by Bryan at 2:13 PM 1 comment:

I'm back, folks!  I certainly didn't mean to let this much time elapse since my last posting, but I assure you I have been far from idle.  I have merely been working on a companion for the Columbia numerical listing of the last post, and here it is.  This is a similar listing of all Victor Musical Masterpiece sets from its inception in 1927 to its demise in 1951 (actually it was merely transferred to 45 rpm, and then to LP, but that is beyond the scope of this listing), as before downloadable as a PDF document.  There are quite a few gaps in the sequence, especially in the M-900s and the DM-1400s, so anyone with information on those entries which I have had to mark "unknown" is invited to come forward.  Meanwhile, here's the link to this work-in-progress:

Postscript: Someone did very kindly come forward, and so, as of March 5. 2012, the file has been updated with the new information that has been made available to me.
Posted by Bryan at 2:11 PM 8 comments: