This week I offer something which, had someone told me five years ago (when I acquired this set, for free) that I would be transferring and offering it as a download I would have said they were crazy!  Ordinarily, the type of lush orchestral stylings of popular song à la Kostelanetz or Mantovani, as represented in this album, is complete anathema to me; however, I have become convinced over the past year that Morton Gould (1913-1996) was a genius, and, like it or not, the numerous albums he made of his own arrangements of popular material are a part of his legacy.  (One might argue that they made the more serious part of his legacy possible, as they certainly earned him a lot of money!)  Moreover, Gould's arrangements seem to me a cut above the Kostelanetz standard - more symphonic in character.  Kosty was mainly concerned with gorgeous sounds, and Gould matches him on that level, but there are subtleties of harmony and counterpoint that I don't recall hearing in a typical Kostelanetz cover.  Even so, I wouldn't recommend listening to this album all at once; after one or two tracks, my mind tends to wander.  Here are the details:

This was Gould's last album in Columbia's Popular series (and one of that series' rare 12-inch albums); afterwards, he was switched to the green-label Masterworks semi-classical line, where Kostelanetz reigned supreme.  No doubt Kosty didn't like that!  Certainly, Gould never got the promotion that Kostelanetz got at Columbia, and by 1954 he had jumped ship for RCA.
Posted by Bryan at 6:18 PM 6 comments:

Well, Shostakovich's birthday is upon us again, on Tuesday (I first celebrated it on this blog two years ago, with Efrem Kurtz's 1947 recording of his Ninth Symphony).  Here is Fritz Reiner's only commercial recording of a work by Shostakovich, which happens to be my favorite of his 15 symphonies, primarily because it's the first major Shostakovich work I ever came to know, through this very set:

This set was issued in direct competition with Stokowski's 1940 recording, with the Philadelphia Orchestra, on Victor, and was then reissued on LP (unlike Stoki's).  Incredibly, the next version of the Shostakovich Sixth wasn't made until 1958 (a fine one, by Sir Adrian Boult, on Everest), by which time this Reiner version had been deleted!

This is the second copy of MM-585 that I have owned, thanks to Ken Halperin of Collecting Record Covers.  The first I purchased as a lad of almost twelve, from a wonderful shop in downtown Decatur, Ga., called Clark Music, at 115 Sycamore Street.  I could write a book about this place, which was so important to me during the 1970s.  It was, among other things, the site of my first summer job.  Clark's was a mom-and-pop operation opened in 1945 by Mayo and Mary Clark, which originally sold both sporting goods and musical merchandise.  Mr. Clark oversaw the former, and Mrs. Clark the latter.  They apparently never sent back to the manufacturers anything they couldn't sell, for when I discovered the store in 1973, the back wall was crammed with 78s, classical and popular, in brand-new condition.  Mrs. Clark also insisted the prices were the same as in the late 40s, and I know now that she was right, but for one of my limited means, these were still expensive!  This Shostakovich set cost $7.25, and I remember that after buying it, I had to call a neighbor for a ride home, for I had miscalculated the sales tax, and ended up a penny short of the 15-cent bus fare!  Clark's finally closed its doors in 1990, shortly after Mrs. Clark died, and I miss it still.  I found some wonderful treasures there.

This week I offer something that should be a real treat for lovers of the harp (and really now, who doesn't love the harp?) - a wonderful performance of Handel's Harp Concerto by that master of the instrument, Marcel Grandjany (1891-1975), complete with his own cadenza.  These records were my introduction to this ever-fresh piece, way back when I was a tot, and this remains my favorite recording of it (I'm not familiar with Grandjany's subsequent recording, from the early stereo era, on Decca).  The set is unique in my experience for having not one, but three separate fillers - a fact about which Irving Kolodin loudly complained in the May 29, 1948, issue of Saturday Review - apparently so that the Handel Concerto could be played in one pass through an automatic record changer.  These three extras present Grandjany's transcriptions of Baroque lute and keyboard pieces, and I for one am quite pleased to have them!

I'm afraid I'm a little late to the party, but last week (Sept. 4) saw the 188th anniversary of the birth of Anton Bruckner (1824-1896), and I guess it's better late than never.  So in his honor, I present the première recording of his finest chamber work, the String Quintet in F, which falls chronologically between the Fifth and Sixth Symphonies.  This features the Cologne-based Prisca Quartet, named after its leader, Walter Schulze-Prisca - whose name originally appears to have been simply Walter Schulze, but he took his wife's last name, Prisca, when he married her!  The playing sounds quite old-fashioned even by the standards of its time, and it may well be the slowest version of the Quintet on record.  (If the Scherzo weren't cut, it would be easier to make a comparison.)  Hans Roelofs, in his excellent Bruckner discography devoted to the composer's non-symphonic music, considers this recording to be of documentary interest only.  But this could be the closest we can come to hearing Bruckner's music as Bruckner himself would have heard it, and it's worth noting that Schulze-Prisca was born the same year, 1879, as this Quintet was written.  Judge for yourself:

During the 1930s, the Prisca Quartet recorded several sets for Deutsche Grammophon-Polydor.  Besides this Bruckner quintet, there were three Mozart quartets (one of which is available from Pristine Audio), and quartets by Beethoven, Haydn, Schubert and Verdi.  Oddly, all but the Haydn and Bruckner were released on ten-inch discs!
Posted by Bryan at 11:42 PM 1 comment:

Here's another treat for you Ormandy fans out there - the first of his two recordings of the Beethoven Choral Symphony, recorded only two weeks after V-E Day in 1945 (incidentally, at the same time as the Prokofiev Alexander Nevsky Cantata I uploaded earlier).  It features the Westminster Choir, directed by John Finlay Williamson, and soloists Stella Roman, Enid Szantho, Frederick Jagel, and Nicola Moscona.  This recording boasts two "firsts" - it was the first commercially-available recording of the Ninth made outside of a German-speaking country to have the vocal portions sung in the original German, and it was the first available on LP (in 1949).  It's also one of the few 78-era recordings to take the second repeat in the Scherzo - the only others I'm aware of are the two by Albert Coates (acoustical and electrical).

This is one of the few Columbia 78 sets to circulate with two distinct Steinweiss covers.  The other one looked like this: 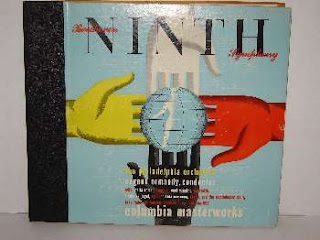 (Please excuse the poor scan; it was lifted from an eBay ad.)  I suspect that this graphic illustration of "alle Menschen werden Brüder" was thought too hot to handle in some markets, although I once had a copy of the set with this cover, and the price sticker inside revealed that it had originally been purchased at Rich's Department Store - in Atlanta!

UPDATE (July 3, 2017): Since writing the above, I've found one source that seems to indicate that the blue cover was actually a replacement for the pink cover - see this article called "Beethoven in a Pink Cloud" in the Saturday Review of Literature (October 30, 1948).
Posted by Bryan at 9:21 PM 10 comments: