Haydn by the Musical Art Quartet

Last fall, when I was doing my "reissues," I re-uploaded a Schubert recording by the Musical Art Quartet (Sascha Jacobsen and Bernard Ocko, violins; Louis Kaufman, viola; and Marie Roemaet-Rosanoff, cello), saying that it was one of three major recordings that this ensemble made for Columbia in the late 1920s.  Well, here's another - and, as it happens, the first of the three, made only a year after the group's founding in 1926:

In the earlier post concerning the Musical Art Quartet, I mentioned also that Sascha Jacobsen was the famous member of the group at the time, even to being one of the names mentioned in the title of a 1922 Gershwin song, "Mischa, Jascha, Toscha, Sascha."  (The others, of course, are Elman, Heifetz and Toscha Seidel.)  At the time, that song was familiar to me only by reputation; this state of affairs changed two days ago, however, thanks to YouTube.  Not one of the Gershwins' better efforts, perhaps, but it is rather fun nevertheless.

Tully Potter informs me that the Musical Art Quartet was in existence until 1944, and that Jacobsen and Roemaet-Rosanoff were the two constant members.  (This means that Jascha and Sascha played together, when Heifetz, Sanromá and the Musical Art Quartet recorded the Chausson Concert for Victor in 1941.)  Shortly after founding, second violinist Bernard Ocko was replaced by Paul Bernard, who also remained until 1944.  (Ocko plays on the Haydn set, and Bernard on the Schubert.)  Louis Kaufman gave up the viola chair in 1933 to the, confusingly, almost identically-named Louis Kievman (later to play in the Stuyvesant Quartet); in 1937 William Hymanson became the violist.
Posted by Bryan at 6:14 PM 4 comments:

Bloch and Gould on Mercury Wing 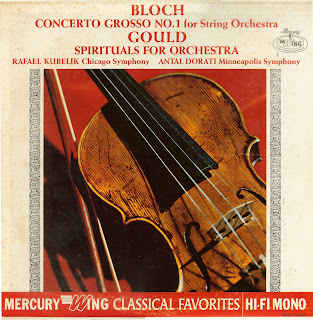 This one's in response to a request.  One of my correspondents had expressed a desire to hear again Antal Dorati's performance, with the Minneapolis Symphony, of Morton Gould's "Spirituals for Orchestra," saying that this recording is superior not only to Walter Susskind's 1958 Everest recording (with the London Symphony, which can be heard on Youtube here and here) but even to Gould's own (with the Chicago Symphony)!  I don't know about the latter claim, since I don't know that recording, but it does seem to me that Dorati gets it right (and I would also add that he beats Rodzinski, who was one of the first to conduct the piece, and whose Columbia 78 set with the New York Philharmonic I used to have):

This LP, which I found in my father's record collection, is a reissue, and the coupling is, it seems to me, a bit incongruous.  But it is the finest, most dynamic performance I think I have ever heard of Bloch's First (and, at the time this recording was made, only) Concerto Grosso:

Today I present the first three recordings by North Carolina-born contralto Carol Brice (1918-1985), who, in 1943, became the first African-American to win the Walter Naumberg Award.  The first two of these sets, recorded on the same day, also feature Fritz Reiner and the Pittsburgh Symphony - in fact, since the singing is incidental, Reiner gets the main billing in this gripping performance of Falla's El Amor Brujo:

Next, the first-ever recording of a popular Mahler song cycle:

Finally, from a year later, an album of Bach arias (two from the Magnificat in D, and two from the Mass in B minor), this time conducted by Daniel Saidenberg, and also featuring the talents of Julius Baker (flute) and Albert Goltzer (English horn):

As with many of the Steinweiss-illustrated Columbia albums I have been posting lately, the Bach and de Falla sets were kindly provided to me by Ken Halperin of Collecting Record Covers.
Posted by Bryan at 1:17 PM 5 comments:

Last fall, when I was doing my "reissue" series, one of my posts was "The Composer as Accompanist" in which I offered chamber music by John Ireland and Walter Piston with the composers presiding at the piano.  In the same vein, here is a recording of the 1938 Piano Quintet of the Vienna-born Ernst Toch (1887-1964), with the composer at the piano, and accompanied by a quartet consisting of Louis Kaufman and Grisha Monasevitch, violins; Ray Menhennik, viola; and Julian Kahn, cello:

The work is unusual in that, instead of the usual tempo marks for movement headings, Toch calls his movements "The Lyrical Part," "The Whimsical Part," and so on.  Otherwise the piece is conventional in form, and the harmonic language reminds me of Hindemith.  However, while Hindemith often sounds as if he is channeling Bach, Toch here could be channeling Schumann, for the gestures and intent surely stem from the 19th century rather than the 18th.

Columbia had, in the early 1940s, exactly two works by the expatriate, Jewish Toch (he settled in California in the mid-1930s) on its catalogue, both of which were deleted by the end of the Second World War.  Here is the other one:

After the war it fell to independent West Coast labels, such as Alco, to further Toch's cause.  (In fact, Toch recorded the Piano Quintet again for Alco, on an early LP.)  An excellent Toch discography can be found here.  Its compiler, Claude Torres, has an impressive site devoted to music of Jewish composers impacted by the Holocaust.
Posted by Bryan at 10:30 AM 5 comments: 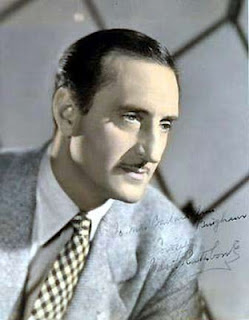 Wednesday, June 13, will mark the 120th anniversary of the birth of the great English actor Basil Rathbone (1892-1967), and, to celebrate, here is a recording that might surprise those who know his portrayal of the villainous Sir Guy of Gisborne, opposite Errol Flynn's title role in the 1938 Warner Brothers feature The Adventures of Robin Hood.  Here Rathbone himself is Robin Hood, and a very convincing one, too:

The supporting cast includes Raymond Lawrence as a delightfully wicked Sheriff of Nottingham; Jay Novello as Will Stutley; Ramsay Hill as Friar Tuck; Tom Collins as Allan-A-Dale; John Goldsworthy as Much; Marvin Miller (perhaps the best-remembered of this group of players) as Little John; Joy Harrington as Maid Marian, the only female voice heard on this recording; and Harry Bartell (a regular on "Gunsmoke" - both on radio and TV) as the Herald.

A bonus on this recording is the delightful musical accompaniment, never intrusive but woven into the story.  The chorus, which offers songs ranging from "Greensleeves" to extracts from Sullivan's "Ivanhoe" and German's "Merrie England," is led by Tudor Williams (1896-1971), who appeared on-screen, usually as a singer, in 25 films, most notably Citizen Kane and Mrs. Miniver.   The brass choir is led by James Stagliano (1912-1976), who played French horn in the Los Angeles Philharmonic and in the Hollywood studio orchestras (his film credits include Gone With the Wind), then went on to become the Boston Symphony's principal horn from 1950-1973.

Basil Rathbone became quite an asset to Columbia Records during the years of the Petrillo recording ban (1942-44), since, as an actor rather than a musician, he was not affected by the ban!  During this period he made several recordings of poetry and dramatic presentations, including "Treasure Island" and "The Murder of Lidice" which were accompanied only by a capella choruses - which also were not subject to the ban.  In the LP era he made numerous recordings for Caedmon, including his famous Sherlock Holmes portrayals.
Posted by Bryan at 7:49 PM 3 comments:

Smetana by the Primrose Quartet

Today I present a great string quartet recording by an ensemble which was, alas, too short-lived: the Primrose Quartet, consisting of Oscar Shumsky and Josef Gingold, violins; William Primrose, viola, and Harvey Shapiro, cello.  All four were members of the NBC Symphony under Toscanini when the group was formed, at the invitation of NBC, in 1938, and America's entry into the Second World War caused the disbandment of the Quartet when Shumsky entered the U.S. Navy.  They left only three issued recordings: Haydn's "Seven Last Words" (the work's first recording in its string quartet version), Schumann's Piano Quintet with Jesús Maria Sanromá, and this one:

This was the first-issued of the Primrose Quartet sets, and how fitting that it should have been of this work, with its opening theme on the viola, gloriously played by the ensemble's namesake!

The Primrose Quartet also recorded Brahms' Third Quartet and Mozart's K. 387, but these were not approved for issue.  The three issued recordings, plus the Brahms, were reissued by Biddulph about twenty years ago, but this is long out-of-print, and commands hefty prices when it does appear.

My friend and fellow record-collector, David Hoehl, who provided me with this Smetana set and with the Bloch Suite for Viola with Primrose that I uploaded earlier, calls my attention to this bit about Fritz Kitzinger, the accompanist on the Bloch Suite, as found in the fifth edition of Baker's Biographical Dictionary of Musicians (1958):