My Christmas present to myself this year was a new turntable - an Audio-Technica LP120 3-speed direct drive unit - meaning that it will no longer be necessary for me to switch out between turntables to handle LPs and 78s (at least, I hope it won't be!).  Here is my first project using the new table: an LP featuring two oboe concertos played by the great Leon Goossens, as a kind of postscript to the transfers of concerto recordings by him that I offered earlier:

No doubt both of these, like the earlier Goossens concerto recordings, would have been issued as English Columbia 78 sets had not the long-delayed launch of LP by EMI in September 1952 intervened.  As it was, both recordings had to wait eleven years for full issue.  In the case of the Bach, an incomplete issue actually did occur in 1953, on American Columbia (ML 4782) - apparently only the first three 78-rpm matrices of the required four were available to CBS, with the result that the concerto, on that release, cuts off about a minute into the finale!

My best wishes to everyone for a prosperous and collectingful New Year!
Posted by Bryan at 4:04 PM 3 comments:

﻿
For what is likely to be my last post of 2011, I present two of Arthur (spelled with an "h" on his earliest recordings) Rubinstein's earliest concerto recordings, which show the pianist, then in his early-to-mid-40s, as quite a firebrand.  The first of these is, I'm pretty sure, his very first concerto recording, with Albert Coates conducting:

Rubinstein himself had strong reservations against the issuance of this recording; in his autobiography, he recounts how difficult the sessions were, with the piano placed in the back of the orchestra, far away from Mr. Coates! Nor had he any chance of consulting with Coates before the sessions.  Whatever the circumstances, an exciting performance emerges from these discs, surely one of the fastest on record of the Brahms B-Flat Concerto.  Listen and judge for yourself.

For his next concerto sessions in January 1931, Rubinstein had the services of John Barbirolli, with whom he recorded two works: the Chopin F minor concerto, and this concerto by Mozart:

This was among the earliest recordings of any Mozart piano concerto.  It was recorded and issued concurrently with Georges Boskoff's of K. 459 on Parlophone and Magda Tagliaferro's of K. 537 on French Decca; only Dohnányi's famous Columbia recording of K. 453 of 1928 is earlier than these.  It also remained in the catalogue well into the 1950's - in contrast to the Brahms, which was displaced by Schnabel's recording of six years later.

Merry Christmas, everyone!
Posted by Bryan at 10:04 AM 3 comments:

Shostakovich by the Stuyvesant String Quartet

This is the second of two posts dealing with the Stuyvesant String Quartet, and presents them in two works by Shostakovich, one of them recorded only a week after the American première of the work by the same artists.  This was the Piano Quintet, Op. 57, which Shostakovich had written the year before, and played the first performance with the Beethoven Quartet in November, 1940.  Here the pianist is Vivian Rivkin, the wife of conductor Dean Dixon:

As I mentioned in the previous post, the Stuyvesant Quartet, founded in 1938 by the Shulman brothers, Sylvan (first violinist) and Alan (cellist), had varying inner voices during its first five or six years of existence.  On the Shostakovich Quintet, these are Harry Glickman (second violin) and Louis Kievman (viola).  For the next recording, made the day before the Petrillo recording ban took effect, these had changed to Maurice Wilk (second violin) and Emanuel Vardi (viola):

At the time of this recording, Shostakovich had written only one string quartet.  This wasn't the first recording of it, but the previous one, by the York Quartet, was already out of print by the time the Stuyvesant's appeared, having been issued on the fly-by-night Royale label.

Before founding the Stuyvesant Quartet, Sylvan and Alan Shulman played in the Kreiner Quartet, founded in 1935 by the violist, Edward Kriener.  This group, with Josef Gingold as its second violinist, made a handful of recordings, including this first recording of Malipiero's "Rispetti e Strambotti", a work that would later become a specialty of the Stuyvesant String Quartet:

These uploads complete the "reissue" program I have been working on for the last two or three months; I originally offered these recordings in 2008.
Posted by Bryan at 2:34 PM 5 comments: 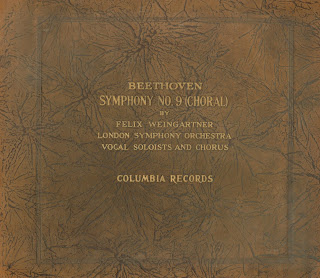 Just in time for Beethoven's birthday later this week, here is the first electrical recording of what is, for many (myself included), his greatest symphony.  It features the London Symphony Orchestra, with chorus, conducted by Felix Weingartner, and a solo quartet consisting of Miriam Licette, Muriel Brunskill, Hubert Eisdell and Harold Williams.  The vocal portions are sung in English, as they are on Albert Coates' two recordings of the Ninth - the acoustical one of 1923 which I posted earlier, and the electrical one dating from seven months later than Weingartner's:

I had a request for this recording when I posted Weingartner's acoustical recordings of Beethoven and Brahms last month. Although I was a little leery of attempting a transfer, given the rather worn condition of the records, nevertheless they cleaned up better than I had any reason to hope, and so I offer my transfer here.  Happy Beethoven's Birthday, everyone!
Posted by Bryan at 3:21 PM 10 comments: 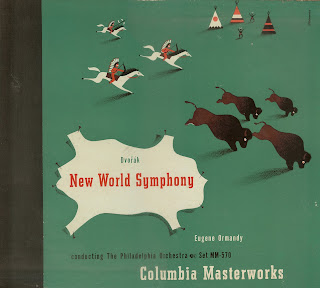 Two American symphonies, one about America which is among the most well-known in the symphonic repertoire, and one by an American which should be far better known, are the subjects of today's post.  Both originate from Philadelphia, and are conducted by the indefatigable Eugene Ormandy: 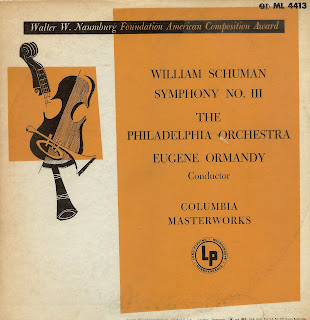 This was the first recording of William Schuman's Third Symphony, one of his finest works, and was recorded under the auspices of the Walter W. Naumberg Foundation, which awarded the symphony its American Composition Award in 1950.  It was released just a little too late to be issued as a 78 set, though eight 78-rpm matrices (XCO 45351 through 45358) were assigned to it.  Ormandy's recording is far less known than the one Leonard Bernstein did about ten years later, which it complements nicely.  I first offered it as an upload in May, 2007; the Dvořák, however, is new.  Ormandy, though content to play the "New World" straight for the most part, nevertheless indulges in adding, in the finale, two additional cymbal crashes to the one which Dvořák actually wrote. (In fairness to Ormandy, these were probably an inheritance from his Philadelphia predecessor Stokowski.)
Posted by Bryan at 4:24 PM 9 comments:

Bloch by the Stuyvesant String Quartet

This evening I present the first of two posts devoted to the Stuyvesant String Quartet, founded in 1938 by the Shulman brothers, violinist Sylvan (1912-1985) and cellist Alan (1915-2002).  This ensemble became renowned for its recordings of 20th-century quartets, including a number of recording premières.  Among these was their debut recording in the quartet repertoire, the First String Quartet of Ernest Bloch (pictured above in the year in which he wrote it):

October 10, 1939, would appear to have been a busy day for the Stuyvesant Quartet, for if one believes the data in a Pearl CD issue of Elisabeth Schumann's Bach recordings (which includes the Mass in B minor conducted by Albert Coates), the same players were in the Victor studios on the same date, assisting in accompanying Mme. Schumann in the "Wedding" Cantata, BWV 202, along with harpsichordist Yella Pessl, oboist Mitch Miller and bassist Philip Sklar.

The Stuyvesant String Quartet's inner parts changed hands several times through its first few years of existence.  The Quartet became inactive for a few years during the Second World War, then were reconstituted in 1945 with second violinist Bernard Robbins and violist Ralph Hersh.  This was the lineup for the remainder of the Quartet's career (until 1954).  In 1947 the Stuyvesant Quartet returned to the recording studio, making three sets for New York-based International Records (reissued as LPs by the Concert Hall Society), among which was a further Bloch recording:

This wasn't the first recording of the new Bloch quartet; that had been done five months earlier for English Decca by the Griller Quartet.

I originally offered the Bloch First Quartet in 2008, but the Second Quartet appears here for the first time in my transfer.

Anyone interested in the Stuyvesant String Quartet should look into a fine CD reissue by Parnassus Records, featuring quartets by Hindemith, Villa-Lobos and Quincy Porter, and produced by Jay Shulman, Alan's son.  When last I checked, it was still being carried by Berkshire Record Outlet (at a very reasonable $5.99).
Posted by Bryan at 9:10 PM 4 comments:

Today I present the only commercial recordings of Baroque music conducted by Bruno Walter (1876-1962), as well as a Haydn symphony recording made on the same day as one of these recordings.  All three recordings were made in that fateful year, 1938, the year of the "Anschluss" - the Nazi annexation of Austria, where Walter, a Jew formerly active in Berlin, had been living and working since Hitler came to power.  (The picture above shows Walter in the green room of the Vienna Musikverein, shortly before his last concert there - which featured Mahler's Ninth Symphony.)  The details on the recordings:

The Handel recording is particularly rare, as it received no US issue during the 78-rpm era (although Victor is known to have allocated a set number, M-952, for it).  The Haydn set is rare enough, both HMV and Victor versions having been deleted during the Second World War.  I originally offered the Corelli and Handel transfers back in 2007, but the Haydn symphony is a new upload.
Posted by Bryan at 1:37 PM 7 comments: