This weekend - March 1 - marks the 119th birth anniversary of the great Greek maestro, Dimitri Mitropoulos (1896-1960), principal conductor of the Minneapolis Symphony Orchestra from 1937 to 1949. From 1939 to 1946 the orchestra and its conductor recorded exclusively for Columbia, afterwards signing on with RCA Victor. From their last series of Columbia sessions came this exciting version of Tchaikovsky's "Little Russian" Symphony: 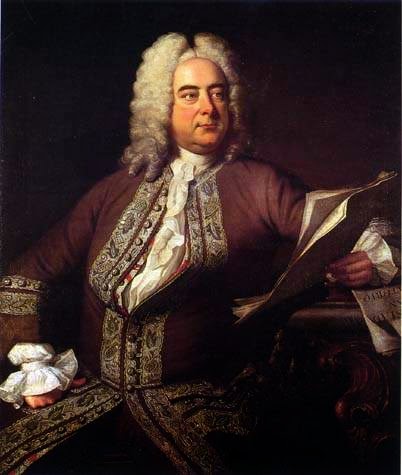 The 330th anniversary of the birth of George Frederick Handel is Monday, February 23, and to celebrate, I'm revisiting the reclaimed record pile, which had a number of single 78s of Handel's music.  Here are a couple of the most interesting ones:

The Musicraft record was one of that company's very first releases.  It features Otto Luening (1900-1996), later to gain fame as an electronic music pioneer, and his then-wife, Ethel (neé Cobb).  The record by Yella (Gabriella) Pessl (1906-1991) is one of about eighteen issued by Columbia in 1936 and 1937; she then defected to Victor, where she concentrated on recording chamber music, while Ernst Victor Wolff (1889-1960), a mainstay of the early Musicraft catalog, replaced her as Columbia's resident harpsichordist.  Both Pessl and Wolff, incidentally, used a Maendler-Schramm harpsichord (a German make in production between 1906 and about 1960), and the recording careers of both seem to have petered out after about 1940.
Posted by Bryan at 3:17 PM 3 comments:

Isaac Stern in Music from "Humoresque"

With another Academy Awards ceremony looming (the 87th!), it seems a fitting time to share this album of music from the 1946 Warner Brothers romantic melodrama, "Humoresque." This story about an aspiring young violinist's doomed affair with a wealthy socialite, played by Joan Crawford, has long been admired by Crawford's fans as one of her finest performances on film. I can see why, but for me, the film only works because of its glorious music, played on the soundtrack by Issac Stern and Oscar Levant, who also plays the part of best friend to the on-screen violinist (played by John Garfield). My problem with the picture is that neither of the lead characters seems particularly likable; in fact Levant's character is the most sympathetic in the film, unusually for him! Nor did I care for the underlying message, which seems to be: "don't get involved with a musician; they're all crazy and will drive you to suicide if you're so unfortunate as to fall in love with one!" When I watched the movie for the first time, it felt like I was sitting through endless periods of bickering dialogue while waiting for the all-too-brief musical interludes.  I'm sure that my little review probably tells more about me than about the film, but having said that, the best part of it, for me, is right here:

The Wagner fantasie is the only work played uninterruptedly in the picture (as its climax, in fact), so it was dubbed from the soundtrack; the other pieces were studio recordings.

The story goes that Warner Brothers originally wanted Jascha Heifetz for the job of playing the violin on the soundtrack, but he demanded more money than Jack Warner was willing to pay, So "J.L." said "we'll get a talented kid to do it," went to San Francisco to hear Stern in a recital, and hired him on the spot. It was undoubtedly a big boost to Stern's career. He was all of 25 years old, and had just begun recording for Columbia.
Posted by Bryan at 3:09 PM 7 comments:

In his 37 years as music director of the Chicago Symphony Orchestra, Frederick Stock (1872-1942) molded the organization into one of America's top orchestras. Originally hired by the orchestra's founder, Theodore Thomas, as a violist, Stock ended up succeeding Thomas as chief conductor after the older man's death in 1905. In 1916, Stock's Chicago Symphony became the first major American orchestra to make recordings, preceding Stokowski's Philadelphia Orchestra and Karl Muck's Boston Symphony by over a year. Stock's recorded legacy is sizable - some 200 issued 78-rpm sides - but not as extensive as someone of his stature would warrant. It fell into four distinct periods: a handful of acoustics for Columbia in 1916-17; a group of early electric Victors in 1925-30; another batch for Columbia in 1939-41 (which included concerto recordings with Nathan Milstein and Gregor Piatigorsky), and a final group for Victor in 1941-42 (including two Beethoven concertos with Artur Schnabel). From his last Columbia session in 1941 (the same session that also produced this recording of Toch's Pinocchio Overture) came this crackling, dynamic account of Brahms' Tragic Overture: