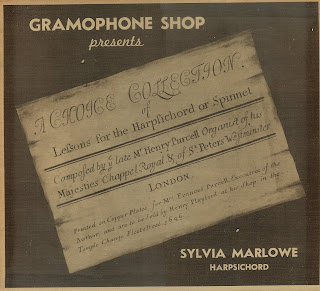 I have had occasion, in the recent past, to sing the praises of New York's Gramophone Shop, and to enumerate their album series called "Gramophone Shop Celebrities" - two of which, both organ recitals by Finn Viderø, I have posted already. Here is the first offering in that illustrious series, released in December, 1946, and featuring the first integral recording of Purcell's "Choice Collection of Lessons for the Harpsichord" comprising eight suites:

This appears also to be one of the first recordings by Sylvia Marlowe to be circulated reasonably widely, although it is still far from common. Previous albums for General (1940 - containing boogie-woogie arrangements) and Bost (1942) do not appear to have survived wartime exigencies. 78 sets for Musicraft and American Decca would follow (one example of the latter, a jazzed-up version of Rameau's Tambourin, can be heard here), but her recording career would not truly blossom until the LP era, most notably for Capitol and, again, American Decca.
Posted by Bryan at 11:04 PM 5 comments:

I have had occasion to comment on the Reger Problem elsewhere (Irving Kolodin famously said that Reger's name sounds the same backwards and forwards, and his music often shows the same trait!). Today I present one of the few works of his which I can really enjoy, possibly because it is the first one I ever became familiar with, long ago, through this very recording, before I knew Reger was supposed to be "difficult":

...but I'm also willing to consider the possibility that I enjoy it because it's a fine piece. Composed in 1905-06, this Serenade is symphonic in scope, its two large sonata-form movements flanking a wispy scherzo and a slow movement of almost Elgarian eloquence. Part of the piece's appeal is that it inhabits a unique sound world, for Reger or anyone else. It is scored for a moderate-sized orchestra, with harp and timpani but no trumpets or trombones, the string section being divided into two separate choirs, one with mutes and the other without. Eugen Jochum (1902-1987) seems to have made a specialty of it, for a recording he made two weeks after the Telefunken one, with the Berlin Philharmonic, surfaced on a Urania LP in the 1950s.
Posted by Bryan at 3:53 PM 7 comments:

Perhaps it was inevitable after the success of Carl Nielsen's great Wind Quintet of 1922, but Danish composers since then seem to have excelled at enriching the repertory of chamber music for woodwinds. I have already offered two examples of this at this post; now I offer two more:

These appear to be the first recordings of any work by either composer. Of Holmboe, I have spoken at the post referenced above; this delightful four-movement Notturno has remained one of his most popular works. The fame of Jørgen Bentzon (1897-1951) has been eclipsed by that of his younger cousin, Niels Viggo Bentzon. Jørgen, whose 120th birthday incidentally is approaching (Valentine's Day), was a student of Nielsen, whose influence on his work is strong. The piece recorded here is one of a series of six one-movement works he called Racconti (tales), each scored for a different chamber ensemble.

It should be noted that the members of the trio in the Bentzon work are also members of the "Wind Quintet of 1932" - whose flutist was Johan Bentzon, another cousin.
Posted by Bryan at 10:53 AM 4 comments: