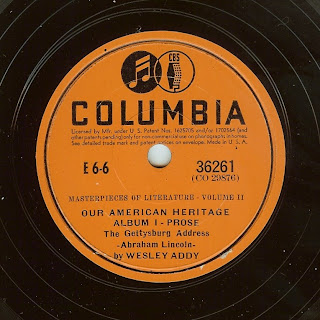 A couple of weeks ago, when I discovered Sam Hopper's marvelous Columbia Masterworks 78rpm Album Discography, I was perusing his page devoted to Columbia's "E" series of sets - a little-known series that, as far as I can tell, was limited to eleven sets, all released in 1941-42 - when I remembered that I actually had one of them!  And while this set, devoted to readings of speeches and prose writings by American political figures, will probably only be of documentary interest to most people, it is at least appropriate to the upcoming Independence Day holiday, and contains a reverently subdued reading of Lincoln's Gettysburg Address to recommend it.  (And I didn't remember until after doing the transfer that the 150th anniversary of the Battle of Gettysburg is this week!  Serendipity?)  Here are the details:

A teacher's manual is included with the set, which has been reproduced as a PDF file.

As I said, there were eleven of these Educational sets, of which two of the others were also under the "Masterpieces of Literature" rubric.  Both of these contained six records of poetry, one volume read by Norman Corwin, the other by Basil Rathbone.  "Our American Heritage" is further described as "Prose Album I" which suggests that further prose volumes were intended, but they never materialized.  The other eight sets were collectively entitled "Student Music Library Series" and contained four sets of Piano Literature, played by Sergius Kagen, two of Violin Literature, played by Alexander Cores, and two of Cello Literature, played by a young Bernard Greenhouse.  Each of these volumes contained three records.  I imagine they are quite rare.

I had never heard of Wesley Addy (1913-1996), the reader on these records, before acquiring this set, but he seems to have been a highly regarded character actor for dramatic roles in film and TV.  But at the time this recording was made, all that was years in the future and his reputation was based solely on stage work, particularly Shakespeare.  He appeared opposite Orson Welles and Maurice Evans, both of whom had made Shakespeare recordings for Columbia. 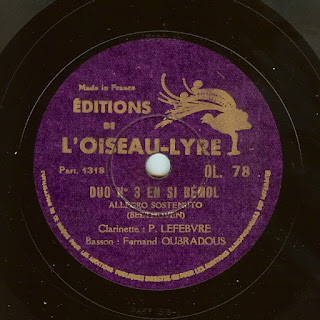 The French music publisher, Éditions de L'Oiseau Lyre (named after the Australian lyrebird), was founded in 1932 by Louise Hanson Dyer (1884-1964) the Australian-born pianist and patron of the arts.  About 1937 the firm expanded its operations to recording, becoming well-known almost immediately for its excursions into off-the-beaten-path repertoire, especially from the Baroque and Classical eras, a reputation it still enjoys as the early-music subsidiary of Decca, which it became in the 1950's.  On 78s there were over 200 issues, and in my heyday as a 78 collector I had some three dozen of them, made by some of the finest musicians in France at the time, including violinist Henri Merckel, harpsichordist Isabelle Nef, cellist André Navarra, and a wind trio, the Trio d'Anches de Paris, which consisted of oboist Myrtile Morel and the two gentlemen who play on this record - the only L'Oiseau Lyre 78 I still possess: 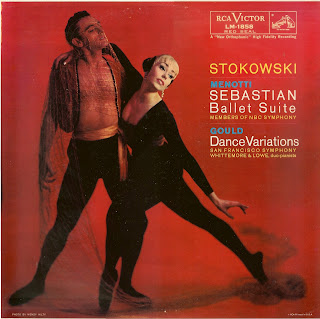 It's been a while since I've offered anything by Morton Gould, whose centennial year we are in (he was born Dec, 10, 1913), so I make partial amends with a work that he himself, according to his biographer Peter Goodman, considered one of his most important pieces.  This is the Dance Variations, a concerto for two pianos written in 1953 on commission by Arthur Whittemore and Jack Lowe, who premiered the score with Mitropoulos and the New York Philharmonic in October of that year, and, one month later, also made this first recording.  (As far as I am aware, the work has received only one other recording, by Joshua Pierce and Dorothy Jonas, about twenty years ago for Koch International Classics, no longer available on CD but only as an MP3 download.)  I concur with the composer's assessment and that of Goodman, who calls it "a score of depth and complexity" - it is a major addition to the all-too-meager repertoire of two-piano concertos and its neglect is unjustified.

With the other work on this LP, we are in slightly more familiar territory, although Gian-Carlo Menotti (1911-2007) is best remembered as an operatic composer.  His ballet Sebastian was written in 1944, before the operas that brought him his greatest fame, The Medium, The Consul, and Amahl and the Night Visitors.  This recording of the ballet's Suite by Stokowski was actually also made in stereo, but not issued as such until 24 years later, with a different coupling.  Here is the original mono version:

LM-1858 was issued with two different covers; the one I have (pictured above) is the second one, from 1958.  I've seen the original cover at a local college library but remember none of the details; in particular, I can't remember whether the Gould or the Menotti was credited first.
Posted by Bryan at 10:57 AM 6 comments: 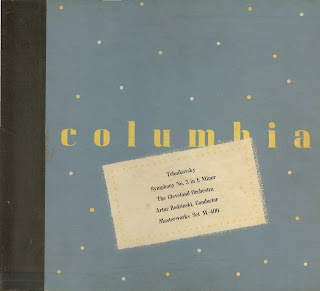 In 1939, Columbia Records, under the new ownership of CBS, began a serious push to compete with RCA Victor in the field of orchestral recording.  At this time Victor had the Philadelphia Orchestra, the Boston Symphony, and  its own NBC Symphony under Toscanini.  Columbia, which hitherto had been content to import orchestral recordings from Europe (particularly Beecham's and Weingartner's), saw this source of supply threatened by the onset of war, and began signing up orchestras all over America.  In short order they  acquired the Chicago Symphony, the Cleveland Orchestra, the Minneapolis Symphony, the New York Philharmonic, and the Pittsburgh Symphony for the Masterworks line.  Except for the Pittsburgh, none of these orchestras were new to records, but the contracts they had with other companies (chiefly Victor) had been allowed to lapse.  Several of the conductors involved, however, were new to records, among them Minneapolis' Mitropoulos, Pittsburgh's Reiner, and Cleveland's Polish-born firebrand Artur Rodzinski (1892-1958), whose recording career began in December 1939 with several major works - Strauss' "Ein Heldenleben", Rimsky-Korsakov's "Scheherazade" and this exciting reading of Tchaikovsky's Fifth Symphony:

Anyone interested in Columbia's classical 78 sets owes it to themselves to check out Sam Hopper's online Columbia Masterworks 78rpm Album Discography, which I have just stumbled across.  This is a first-rate piece of research, some four years in the making, and I cannot recommend it too highly.
Posted by Bryan at 11:52 AM 3 comments:

In honor of D-Day, sixty-nine years ago today, I present a work by a Frenchman who was profoundly depressed by the events of a previous war - Claude Debussy, who actually abandoned composition for several months at the outset of World War I in 1914.  His return to it came in the form of this three-movement suite for two pianos, "En blanc et noir" - a masterpiece, whose second movement clearly evokes the war.  This recording by Bartlett and Robertson appears to have been only the second one made of the work; an earlier version, on French HMV by Marcelle Ruff and Dominique Jeanes, from 1929, had long been deleted when this one appeared, coincidentally, about the time of D-Day! - three years after it was recorded: