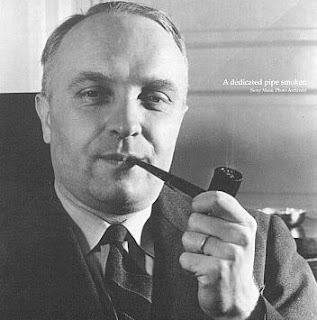 One of my all-time favorite pianists, the Frenchman Robert Casadesus (1899-1972) (pictured above in characteristic pose with pipe in mouth) is the subject of today's post.  Heir to a musical family - his uncles, Henri and Marius, were founding members of the Société des Instruments Anciens which pioneered in the use of historical stringed instruments - he remains unsurpassed to this day as an interpreter of the music of his friend Ravel, and I grew up on his wonderful recordings of Mozart concerti with George Szell conducting.  Here are two early concerto recordings by Robert Casadesus, the Weber work being a recorded première:

My thanks again to Ken Halperin of Collecting Record Covers for supplying me with the Saint-Saëns set.

For those interested in Robert Casadesus, there's a wonderful website, with a complete discography, contributed to by (among others) members of the Casadesus family.
Posted by Bryan at 10:11 AM 1 comment: 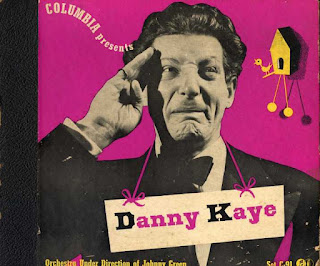 This weekend I bring you the first album by that wonderful American comedian, Danny Kaye (1913-1987).  Eight songs are presented here (two of them by his wife, Sylvia Fine) which demonstrate his gift for mimicry, affecting Russian, French and British accents.  (I have borrowed Ken Halperin's image of the album cover, pictured above, from his site Collecting Record Covers, as my copy of the cover is in terrible shape, disfigured by coffee stains.  This cover is unsigned and therefore probably not by Steinweiss.)  Here are the details:

A few words about individual songs: "Eileen" (one of those by his wife) is the only one here to be sung straight.  "The Fairy Pipers" is the oldest song here, published in 1912; a straight version, sung by Sigrid Onegin, can be heard on YouTube here.  "Farming" must surely be the earliest song to use the word "gay" in its modern sense as "homosexual" - and it's used in its original sense as well.
Posted by Bryan at 8:21 AM 7 comments:

Like so many other composers, it has been the fate of Edouard Lalo (1823-1892) to be remembered for one work above all others, in his case the Symphonie Espagnole for violin and orchestra, written for Pablo de Sarasate.  Perhaps his best-known work after that is this Cello Concerto of 1876, which also boasts a connection with the great Spanish violinist.  If one of the themes of the last movement sounds oddly familiar (the one first heard in the slow introduction), it's because Sarasate borrowed it for his Habañera, Op. 21, No. 2, published a few years after this concerto was written.  Here is the Lalo concerto's first recording, made by the eminent French cellist, Maurice Maréchal (1892-1964):

It's worth mentioning which other cello concertos were available on records at the time this Lalo concerto recording was released.  W. H. Squire had recorded the Saint-Saëns A minor and Elgar concertos for Columbia; Beatrice Harrison another version of the Elgar concerto with the composer conducting, for HMV; Feuermann had recorded the Dvořák concerto for Parlophone; and Guilhermina Suggia the Haydn D major for HMV, a recording I have posted here.  Incredibly, neither the Schumann nor the Boccherini-Grützmacher B-Flat were yet available on records.
Posted by Bryan at 12:21 PM 1 comment:

The more works by New York-born Morton Gould (1913-1996) I hear, the more I am convinced that he is one of the most seriously underrated of American composers.  I'm sure the abundance of popular-music stylings that pop up in his pieces hasn't helped his case any, nor has the fact that, in the 1940s and 1950s at least, he made his share of Kostelanetz-like arrangements of popular tunes which he recorded with his own orchestra.  But the best of his work has wit, charm and craftsmanship second to none for an American composer.  Typical is this gem of a miniature piano concerto from 1943, which he originally called "American Concertette" - it didn't receive the subtitle "Interplay" until turned into a ballet two years later:

The piece is in four short movements, the second of which is a quirky Gavotte, and the third a Blues that took on a life of its own as a solo piano piece.  Incidentally, the suffix "-ette" to denote works of smaller structure than full scale ones (e.g., "Concertette," "Symphonette") was Gould's invention, which he subsequently came to regret.
Posted by Bryan at 8:26 AM 7 comments: 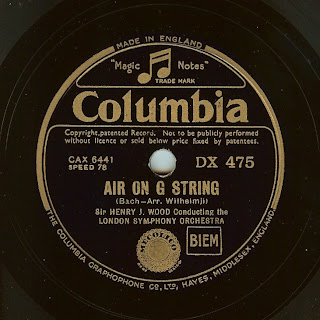 It's been an insanely busy weekend, and I've had time to prepare only morsels, but they are, I think, tasty ones, and I hope you will agree: two string-orchestra arrangements of Bach conducted by the great Sir Henry J. Wood (1869-1944).  Here they are:

The label incorrectly identifies the orchestra as the London Symphony; American and British catalogues identify the record as by the British Symphony Orchestra, which Weingartner and Bruno Walter also conducted for records, and which I suspect was a pseudonym for an ad hoc group.  On the same session, Wood and the orchestra also recorded Bach's Brandenburg Concerto No. 3, which I uploaded earlier at this post.
Posted by Bryan at 9:38 PM 1 comment:

In the comments section of my last post about Emanuel Feuermann, somebody put in a request for his impassioned, magisterial performance of Ernest Bloch's "Schelomo."  Well, I'm happy to report that the records I have of this (the only other Feuermann 78s I have besides those in the last post) are in fine shape, so, here is my transfer:

March 27, 1940, was a busy day for Stokowski's Philadelphians, for it began with a recording of Glière's "Ilya Murometz" Symphony (No. 3) on eleven sides, then continued with Debussy's "Afternoon of a Faun," Harl McDonald's "Legend of the Arkansas Traveler" and the Prelude to Act III of Wagner's "Lohengrin" before Feuermann joined them for this "Schelomo" recording.  Whew!

Speaking of Victor sets, a correspondent recently shared with me a list of Victor Musical Masterpiece sets that Steven Smolian prepared in 1964 for the American Record Guide, which filled in many gaps that I had in my own listing posted on this blog last year.  (Mr. Smolian, incidentally, supplied me with a number of the rare chamber music sets that I have transferred here.)  I have therefore updated my own Victor list, and have also updated my previous post linking to it, but for those who don't want to take the trouble to look that up, here's the new link: 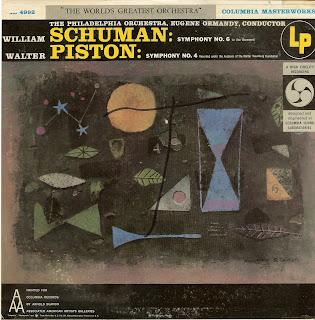 Eugene Ormandy may not have been as visible a supporter of contemporary American music as, say, Serge Koussevitzky in Boston or Leonard Bernstein almost everywhere, but he certainly did his part in keeping it before the public.  Here are three American symphonies performed and recorded by him in the 1950s - I believe all three were once offered as an Albany Records CD, which is now out-of-print:

About the works themselves, I can say little beyond that the Piston symphony is one of his most accessible scores, the Schuman one of his thornier ones.  The Harris, a one-movement work like his famous Third, seems to me one of his finest (of course, I've only heard two others - the Third and the "Symphony 1933"), a variation form based on a long, passacaglia-like theme similar to that in the Piano Quintet uploaded earlier.  I don't have original liner notes for this record, as it came in a generic Columbia Special Products sleeve, so I offer with the download an extract from Dan Stehman's 1984 monograph on the composer, analyzing the symphony. 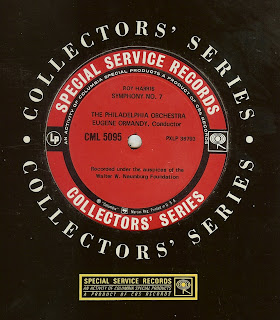