Hindemith by the Guilet Quartet 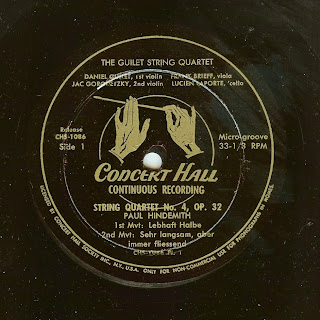 Yes, another LP, but this time one that's taken from 78-rpm originals.  Truth to tell, I wish I had those 78 originals, because there's at least one side join in Concert Hall's c. 1950 transfer that I know I could have done a better job with, simply because I have technology that wasn't available to the good folks at Concert Hall Society back then.  But I suspect this LP is easier to come by than the 78s, simply because the 78s were part of a subscription package whereby the subscriber had to buy all the releases for a given year (and besides that, they were expensive, and a limited edition to boot), whereas the LP was a general release that remained in the catalog until 1957.  So here it is, this first (and, I believe, the only pre-digital) recording of this early Hindemith quartet:

In this post I had some tart comments about the confusing issue of the numbering of Hindemith's quartets.
Posted by Bryan at 12:09 PM 2 comments: 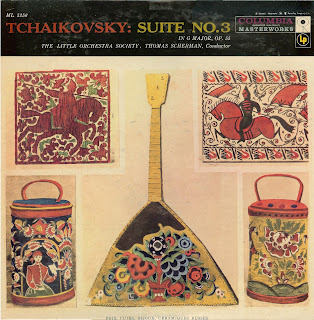 I've been spending a lot more time lately with LPs than with 78s (easier, for one thing), particularly "6-eye" Columbias, and here's a comparatively rare one. Thomas K. Scherman (1917-1979) was the founder of the Little Orchestra Society, still going strong after 66 years, and right away established himself and the orchestra as a force for presenting new and unrecorded works on Columbia (as with this recording of Dello Joio's Harp Concerto). But it's likely that folks in the 1950s were more familiar with his speaking voice than with his conducting, simply because he presented so many spoken analysis records in connection with the Book-of-the-Month Club's series of Music Appreciation Records, of which Scherman was the musical director. (His father, Harry Scherman, had founded Book-of-the-Month Club in 1926.) Today I present the last recording I can trace that he made for Columbia:

This was only the second recording of Tchaikovsky's delightful Third Suite with pretensions to completeness - in those days only its famous variation finale was usually heard. I say "pretensions" because an unfortunate cut is made in the second movement (Valse mélancolique), robbing it of almost half its length. The same cut was made in Walter Goehr's 1952 recording, for Concert Hall (which can be heard here), suggesting that a performing edition of the suite was floating around incorporating this cut.
Posted by Bryan at 10:08 PM 2 comments:

A piano concerto in all but name, William Walton's delightful Sinfonia Concertante (the first of Walton's four concertos) had its genesis in a ballet written in 1925-26 for Sergei Diaghilev's Ballet russes, but after the great impresario rejected it, Walton decided to turn the score into something more practical. The result was this three-movement concerto, unveiled in 1928 with each movement bearing a dedication to one of the Sitwell siblings, his friends and patrons - the first to Osbert, the second to Edith, and the third to Sacheverell. (One can hear Sachie's fondness for the music of Scarlatti reflected in "his" movement.) In 1943 Walton revisited the piece, simplifying the piano part, and, as his relationship with the Sitwells had cooled, he removed the dedications; I knew nothing of them until I began researching for this post, and I have enjoyed this work for thirty years! Shortly thereafter, the Sinfonia Concertante received this first recording:

The pieces from "Henry V" used as the filler for this set were recorded as part of a session, 68 years ago tomorrow, that Walton shared with his friend Constant Lambert, whose ballet "Romeo and Juliet" was the first English ballet presented by Diaghilev, and who thus inspired, indirectly, the Sinfonia Concertante. Lambert's contribution to the session produced several short pieces for Columbia, including a Purcell Chaconne.
Posted by Bryan at 1:24 PM 2 comments:

I've written in the past about the phenomenon of the Great American Third Symphony, particularly in respect to Copland and Roy Harris, and here on this LP are two more contenders. I confess that I had never heard any of the music of Wallingford Riegger (1885-1961) before I found this record. What little I knew about him - that his mature style was essentially atonal - didn't make me eager to seek him out. I've never particularly cared for atonality, and all the atonal works I like - such as Schoenberg's Pierrot Lunaire and Serenade, and most of Alban Berg's music - I like resolutely in spite of the atonality. Well, I was quite blown away by Riegger's Third Symphony, an atonal work with freshness and great rhythmic vitality, and I'm sorry I took so long to make Riegger's acquaintance. It's astonishing to me that this great symphony has never received a recording subsequent to this Naumberg Foundation-funded one of 1952:

Quite unusual repertoire, too, for Howard Hanson to conduct - he tended to favor more conservative styles among his numerous recordings of American works. But his advocacy for Riegger is quite persuasive in this, one of his few Columbia recordings with the Eastman orchestra. By the time it was released in 1955, he was already a fixture at Mercury, and I suspect that the issue was delayed because there was nothing else "in the can" conducted by Hanson to pair it with. The Mennin symphony, conducted by Mitropoulos, was recorded two years later:

I'm sorry to say that I can't summon as much enthusiasm for this work as for the Riegger, although I recognize the importance of Peter Mennin (1923-1989) as a symphonist (he was another in that long list of those who wrote nine, although I think he suppressed the first one). But I hear too many echoes of Vaughan Williams' inimitable Fourth Symphony in Mennin's first movement for comfort. Still, it's good solid music, quite impressive for a 23-year-old youngster, and of course it gets a superb performance from Mitropoulos and his orchestra.

Both of these recordings were reissued around 1970 by Composers Recordings, Inc., but unfortunately with fake stereo effect added. I would hope that they removed this for the CD reissues they made, but it's a moot point in any case, since CRI went bankrupt some ten years ago.
Posted by Bryan at 2:48 PM 5 comments: