Copland by the Dorian String Quartet 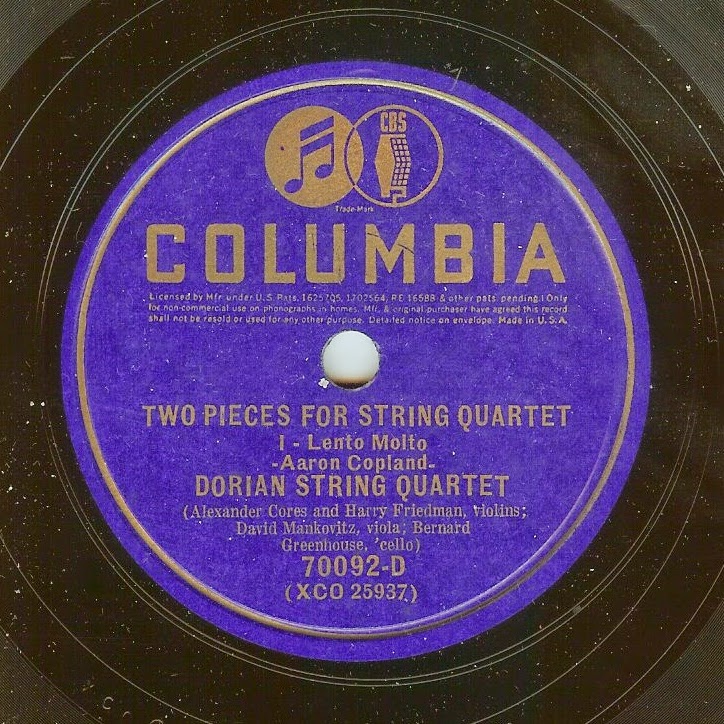 Aaron Copland wrote precious little chamber music, but what he did write is of high quality, and this extends back to works he wrote as a young man in the 1920s. For string quartet there are only three extant pieces, all dating from the 20s, a Movement written while he was studying with Nadia Boulanger in Paris (between 1921 and 1924), which was shelved and forgotten until it was rediscovered in the 1980s, a Rondino from the same period, and a Lento molto from 1928. The latter two pieces (in reverse order) form a satisfying slow-fast grouping, and Copland decided to publish them that way. This is the pair's first recording:

I can't find out much about the Dorian String Quartet, other than that they seem to have been active between about 1939 and 1942, and their membership consisted of Alexander Cores and Harry Friedman, violins; David Mankovitz, viola, and a very young Bernard Greenhouse, who went on to later fame with the Beaux Arts Trio, as cellist. They made only a handful of recordings: the Piston String Quartet No. 1 in 1939, and Arthur Foote's Night Piece with flutist John Wummer, made on the same day as the Copland pieces. Cores and Greenhouse went on to make sets of violin and cello literature, respectively, for Columbia's educational series.

I got this Copland record from an eBay seller, and in the same package was John Kirkpatrick's pioneering set of Ives' "Concord" Sonata on five Columbia 78s. It was only after I ordered it that I realized that Buster had given us this same recording as transferred from its LP reissue, which is the preferable way to hear it, because the quality of Columbia's shellac from this time (1948) was simply awful. The "Concord", however, takes nine sides, making a filler necessary, and this - a part of the second movement of Ives' First Piano Sonata, recorded the same day as the larger work - didn't make it onto the LP. So I offer it here, as a sort of appendix to Buster's upload:

The year 1922 saw the composition of two towering masterpieces of the wind quintet genre, utterly dissimilar from each other: Hindemith's Kleine Kammermusik, and Carl Nielsen's Quintet, Op. 43, written for four of the five players pictured above. The exception, Gilbert Jespersen, didn't join the group until 1929; in the meantime, Nielsen had written his Flute Concerto for him. Nielsen actually intended to write a concerto for each wind instrument, but only the ones for flute and clarinet had been written before he died in 1931 - surely one of the most tantalizing projects in music history, along with Debussy's set of six sonatas for diverse instruments, to be cut short by its composer's death. To return to the Quintet, however, this recording of it by the work's dedicatees became the major vehicle for Nielsen's fame outside Denmark, long before his symphonies were known:

This recording was the first entry in HMV's Scandinavian Red Label series; the next was another Nielsen recording, featuring three of the same players, of this amusing piece depicting a group of strolling musicians who, after two fruitless attempts to serenade a lady, give it up as a lost cause: 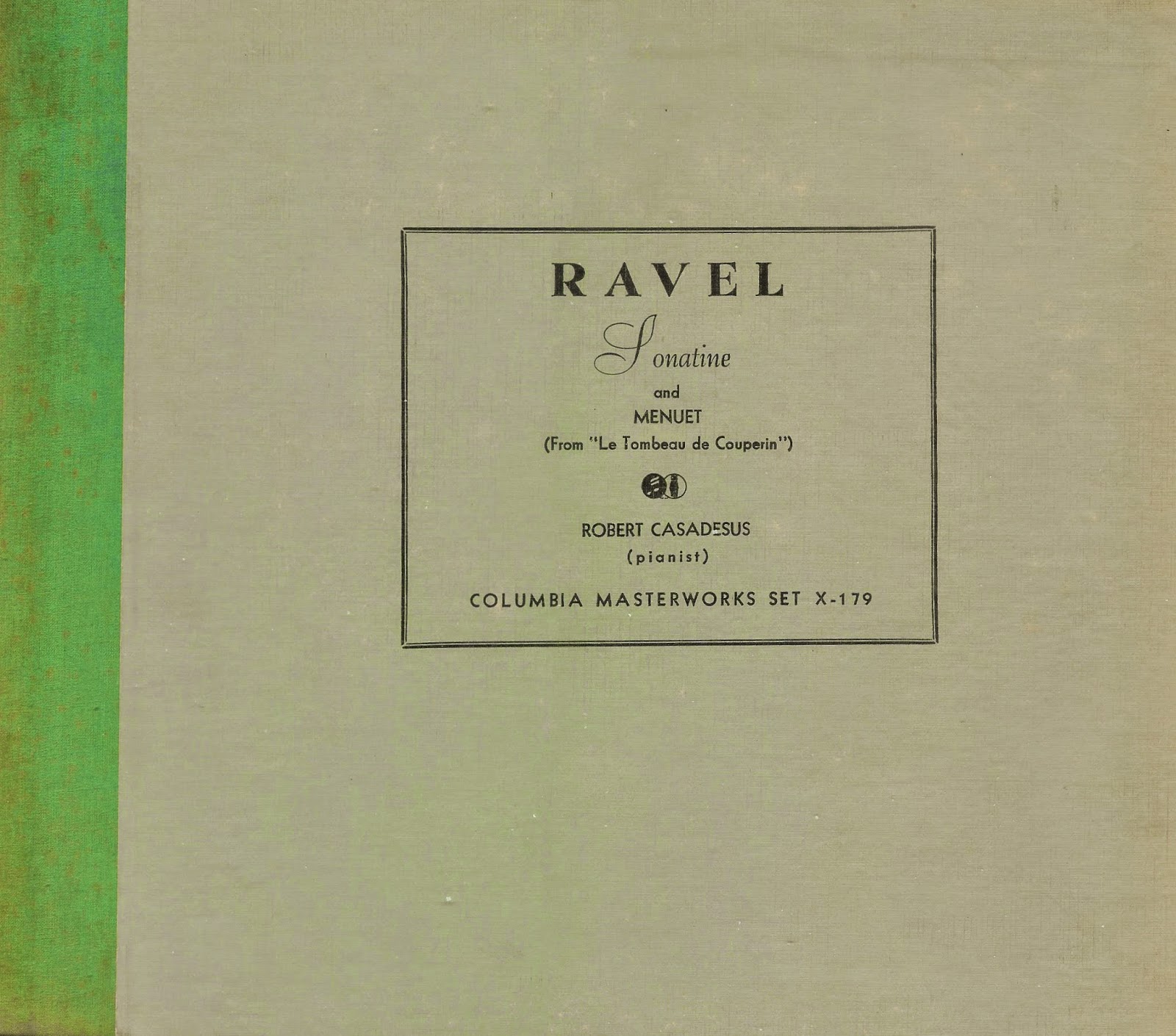 The greatest interpreter of the piano music of Ravel, for my money, was Robert Casadesus. He had met the composer in 1923, after giving a performance of Ravel's Gaspard de la Nuit, and, according to his wife Gaby (also a fine musician with whom he often partnered in piano duo repertory), "had the pleasure to be congratulated by the composer for his interpretation, for his performance of Le Gibet in the slow and nostalgic manner which Ravel had intended, all the time emphasizing the harmonic relationships." It is this sensitivity to the harmonic relationships in Ravel's music that gives Casadesus' performances their unique power. Take, for instance, a work like Le Tombeau de Couperin - Ravel's tribute both to the Baroque dance suite and to fallen friends in World War I, its surface placidity concealing deep grief, which Casadesus is able to draw out fully but, paradoxically, without calling our attention to it.

Casadesus' fame as a Ravel interpreter rests on his 1951 Columbia recordings of the complete solo piano music, but his earlier recordings of the composer have not received such wide circulation.  His very first session in the USA, in 1940 (although he had been a Columbia artist for many years, all his recordings prior to this were made in France), was entirely devoted to Ravel:

The great Philadelphia Orchestra, which no less a perfectionist than Sergei Rachmaninoff preferred to any other (as concerto soloist and as conductor) would not have been what it was without its great players. A prime example of this is its first-chair flutist from 1921 to 1960, William Kincaid (1895-1967). Here is one of several recordings that showcased him as a soloist:

I am indebted to Christopher Steward, who maintains this wonderful page devoted to early flute recordings, not only for making the transfer but for sending it to me with permission to use it on this blog.

Telemann was an almost unknown composer at the time this recording was made; in fact this Suite was, I believe, the first work of his to be offered in the Victor catalogue - the Fiedler Sinfonietta's recording of the Don Quichotte Suite was the second (actually the first to be recorded, but the second to be released), and for most of the decade of the 1940s these two sets constituted all the music of Telemann available to the American record buyer.

The playing by Kincaid and by Ormandy's string section is stylish and delightful, but be prepared to be shocked about 4 minutes into the recording by the sound of a piano, with its action altered so as to sound like a harpsichord, playing in the continuo passages! This was the best the Philadelphia Orchestra could do in 1941. Mengelberg had a similar instrument in Amsterdam when the Concertgebouw Orchestra recorded Vivaldi for Telefunken, and Mahler is said to have used a similar hybrid when presenting his arrangement of a Bach orchestral suite in New York in 1910. By the time Ormandy recorded Telemann again, in 1968 when four concertos were recorded by various Philadelphia first-chair soloists, the orchestra had acquired a real harpsichord.
Posted by Bryan at 3:30 PM 9 comments: