Larry Adler and His Harmonica

The greatest harmonica player of them all, Larry Adler, would have been 100 years old last February had he lived.  (He died in August, 2001, aged 87.)  Around the time that anniversary would have been celebrated, I was lucky enough to find this Decca set in a used record shop.  Adler recorded copiously, but the vast majority of his recordings were British, for it was in Britain that he achieved his greatest fame.  There were sixteen issued American Decca sides made during the 1940s, the last two of them on the very day before the 1948 Petrillo recording ban took effect.  After that ban was over, he had been blacklisted for alleged Communist sympathies, and he moved to England permanently.  Here are one-half of those sixteen sides:

Strictly speaking, the Debussy/Dinicu record doesn't belong to DA-653; the previous owner had substituted it, but I was glad to get it anyway.  The Hora Staccato is a tour de force, as is the Enesco Roumanian Rhapsody.  The latter was featured in the 1948 MGM musical "Three Daring Daughters" starring Jeannette MacDonald, José Iturbi and Jane Powell.  In his entertaining 1984 memoirs, "It Ain't Necessarily So," Adler recounts how Iturbi almost cheated him out of the chance to work on the film:

"[In the film] I was to play Enesco's Roumanian Rhapsody in a Carnegie Hall setting, with Iturbi conducting a symphony orchestra. Before shooting I flew to Chicago for an engagement at the Chicago Theatre. When I returned I had a call from Abe Lastfogel [Adler's agent]. He told me that due to a set-designer's strike, they couldn't get the Carnegie Hall set built. Would I let [the film's producer Joe] Pasternak out of our deal? He'd put me in another film some other time. I could have insisted that I be paid - I had held the time free and signed a contract - but it didn't seem important enough to make it an issue, creating bad feeling and certainly ensuring that I'd never work at MGM again. So I agreed, the deal was off.
"That night Johnny Green rang me. Johnny, an old friend, was most famous as the composer of Body and Soul. He was in charge of music at MGM.
"'Larry', he said, it means my job if word of this gets out.' I promised secrecy.
"He told me that the set-designer story was phony. The set was up, they were shooting the number but without me. Instead of conducting the orchestra while I played, Iturbi would conduct from the piano while he played. And what would he be playing? Enesco's Roumanian Rhapsody. What a coincidence!
"'And Larry', said Johnny, 'he's using your arrangement!'
"Even for Hollywood this seemed to be carrying chutzpah to extremes. I phoned Lastfogel and, keeping Johnny's name out of it, told him what I'd learned. I said find out if the set is up; if it is, then is Iturbi doing a number and, if so, what number?
"Lastfogel called back.
"'You're back on the picture', he said. 'You don't know anything, you keep schtumm.'
"Next day Pasternak phoned. He was delighted, he said, that all the difficulties were ironed out, that I would be in the film after all.
"'Larry', he said, 'I've got a script problem and I need your advice. Could you come out to the studio today?
"I'm in the picture as a mouth-organist and suddenly I'm advising the producer on script problems. I drove out to the MGM studio.
"'Larry', said Pasternak, 'I've got to establish that José and Jeannette MacDonald are in love; there's only one logical place to establish it and that's during your number. Jeannette will be sitting in the audience and I want to show, with one look between them, that they're in love.'
"I had an idea what was coming.
"'Now, Larry', said Pasternak, and this time I could have written the script, 'if José is conducting the orchestra, his back is to the audience, right? And if his back is to the audience, he can't look at Jeannette. Ya with me?'
"Joe, I was way ahead of you.
"'And if he can't look at her, she can't look at him, right?'
"Right.
"'So, the way I worked it out, if José is at the piano, see, like he's playing a duet with you and conducting the orchestra at the same time, this way I can establish the look, the audience knows they love each other, you got it?'
"I got it. I also know I'm screwed.
"That's what we did, except that José had one more trick; he worked his sister, for God's sake, into the act. José Iturbi, Amparo Iturbi, and Friend. I was the friend. The number was lousy."

I've never seen the movie, so I can't agree or disagree with Adler's opinion, but the record certainly isn't lousy.  Of course the Iturbis were Victor artists so they aren't on it - fortunately!
Posted by Bryan at 9:13 PM 9 comments:

Beethoven and Hindemith by the Amar Quartet

What do you do if you're a young composer hoping to make a splash with a new string quartet you've submitted to a music festival, only to find that the group assigned to perform it refuses to do so? Why, start your own quartet, of course. The composer was Paul Hindemith, the quartet his Op. 16, the festival the one for new music at Donaueschingen, in its inaugural year of 1921, and the recalcitrant musicians the Havemann Quartet. So the viola-playing Hindemith and his cello-playing brother Rudolf set about finding two violinists to give the performance with, and the Amar Quartet (often known informally as the Amar-Hindemith Quartet) was born. The group had such a success with Hindemith's quartet that they decided to become a permanent ensemble, and began giving regular concerts in 1922. And Hindemith wrote another new quartet specifically for the group, which turned out to be his finest work in the genre:

This is actually the second recording of the work they made; the first was acoustical, and is so rare that I don't expect to actually hear it in this lifetime. Their electrical recordings are rare enough, though more numerous, and include two Mozart quartets, the Verdi E minor, the first recording anywhere of music by Bartók (the Second Quartet - available from Satyr), and this one by Beethoven:

This occupies five sides of the three records; the set is completed by three more sides devoted to part of another Hindemith opus, to produce an oddly mismatched four-record set:

It isn't known whether more of the work (there are two additional movements) was recorded, but my hunch is that it was, and not passed for issue due to technical deficiencies, as pitch instability is evident on the last side actually issued.

Enjoy - and before anyone asks, these are all the Amar-Hindemith 78s I possess, for which I consider myself very fortunate indeed!
Posted by Bryan at 9:27 PM 13 comments: 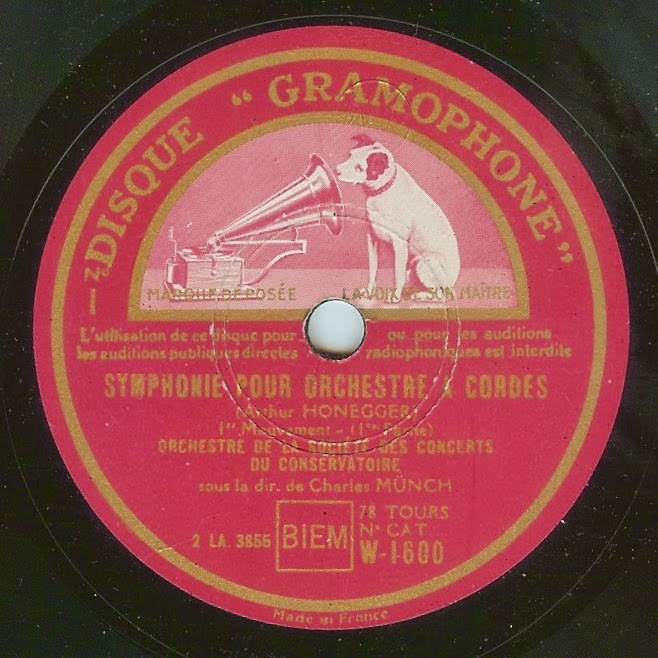 In time for Bastille Day this year, I present an artifact from one of the darkest periods in French history - the Nazi occupation of 1940-44.  This is Arthur Honegger's war-haunted Symphonie pour orchestre à cordes of 1941, in the first of three studio recordings made by his friend and champion Charles Munch (1891-1968).  This appears, in fact, to be the 51-year-old conductor's first recording of any symphony; his great recording career as music director of the Boston Symphony was still years in the future.  This recording, made only a year after the work's composition, with retakes of the middle two sides made a year and a half later, sizzles with intensity:

UPDATE (July 11): My beloved old HP 7410, which I had thought finished a month ago, managed to scan some record labels for me this afternoon, among them more legible scans of W 1600 through W 1602 than I had been able to obtain with its cheap Canon replacement.  (Mind you, those French HMV red labels are hard to read under the best of circumstances!)  Anyone interested can download them in a zip file here.  (I've also replaced the original download files with new ones incorporating the new scans.)
Posted by Bryan at 2:45 PM 2 comments:

This is part 3 of a series devoted to branding changes at Columbia Records in the first fifteen years or so after their successful launch of the long-playing record in 1948.  See also part 1 and part 2.

At the end of Part 2 I showed that the cover branding arrived at by Columbia, around the spring of 1957, looked like this:

This very attractive branding was usually placed at the top right corner of the album cover. By the time stereophonic LPs were introduced by Columbia in September 1958, the arrangement had been modified slightly, with the "LP" component moved up and to the right of the Eye:

...a modification which enabled the trademarks to be displayed flush with the "stereo" indicator at the top of the cover:

(For monaural releases with a stereo counterpart, the trademarks were displayed at the bottom of the cover.)

This basic setup remained unchanged until about the summer of 1960, at which point, the trademarks lost their top-of-the-cover status on stereo issues, and they were reduced markedly in size:

The next major change to the trademarks occurred in the summer of 1961 - the "Lp" portion, presumably by then considered redundant, was dropped, and the Eye transformed into its final form with three concentric rings:

This branding lasted only a few months. By the end of 1961, new albums were featuring this greatly simplified configuration in the upper left part of the cover: 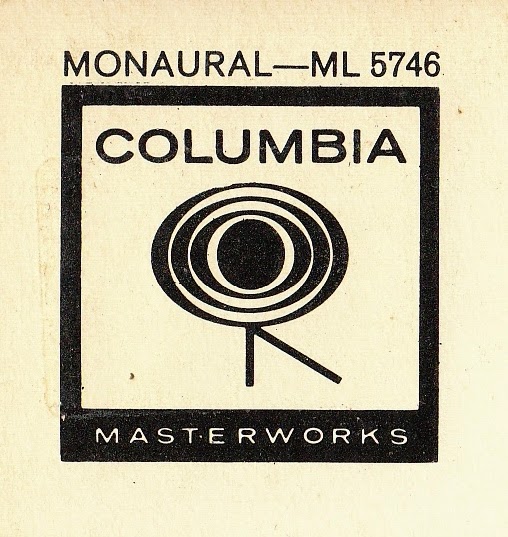 This basic design remained in use, with minor changes in typography and placement, through the late 1970s on Masterworks releases (the entire classical division of Columbia was rebranded "CBS Masterworks" around 1980), and continues in use to this day for Sony's Columbia popular releases. (Incidentally, ML 5746, a recital of French piano music by André Previn, was one of the last releases to be issued with the old "6-eyes" label - in the summer of 1962.)

So why did Columbia, having found a seemingly satisfactory formula for displaying its trademarks on album covers from 1957-60, feel the need for another change? A possible answer is hinted at in an article in the August 29, 1960, issue of Billboard Magazine headlined "Columbia, Philips in New Long-Term Pact Talks." It seems that Columbia had become dissatisfied with having Philips issue its product in Europe, and wanted its own label presence there, as RCA and Capitol already had. Since the Columbia name could not be used there, as EMI owned it, the proposed new label was to be known as "CBS Records." (Philips, for its part, did not relish the idea of giving up popular American product on its label, which is why Philips purchased Mercury Records in 1962.) My guess is that Columbia wanted to update its Eye trademark to fit a new international image. Certainly by the time CBS Records was launched in Europe in 1962, the Eye logo had assumed its new look and was being used to identify the new label.