The string trio repertoire is not large, but it is rich - and made richer by the efforts of the Pasquier Trio, three brothers (Jean, violin; Pierre, viola; Étienne, cello) for whom such composers as Pierné, Roussel, Moeran and Françaix wrote string trios.  The cornerstone of this repertoire is surely Mozart's wonderful Divertimento in E-Flat, K. 563.  Who but Mozart, whose birthday we will be celebrating on January 27, could compose the greatest work ever written for the combination of violin, viola and cello, pouring the most profound of his ideas into it, and then modestly call the result a "divertimento"?  Here is the work's first recording, and the first of three the Pasquier brothers would make:

This transfer is taken from a very nice early pressing of the American Columbia set, which has sustained a little wear (those early automatic changers did no favors for the spindle holes, I'm afraid), so I was surprised and pleased by how well the result sounds. 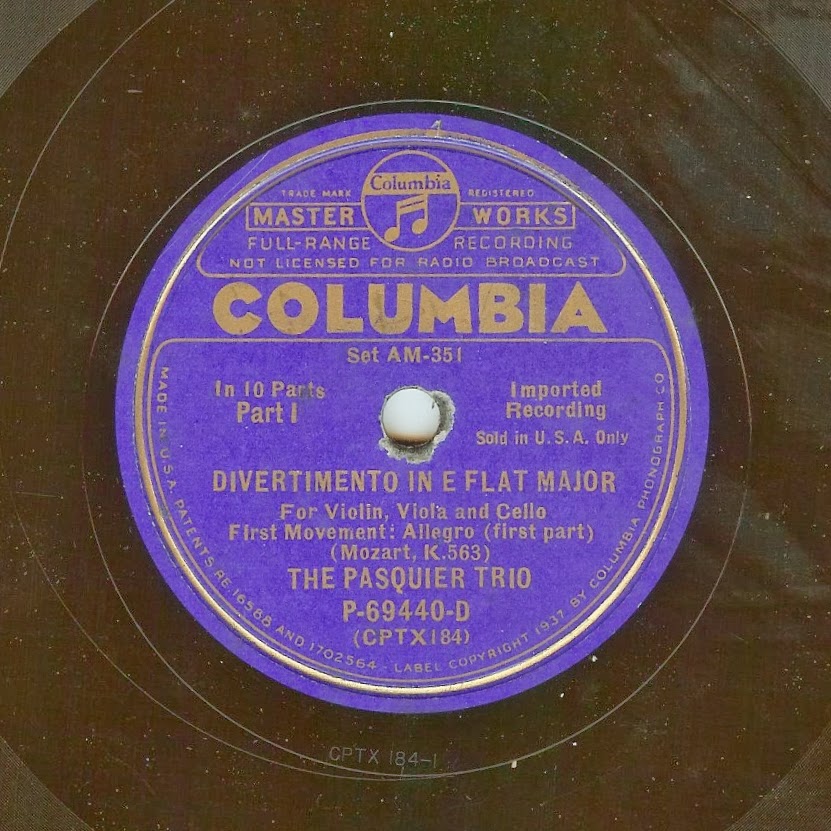 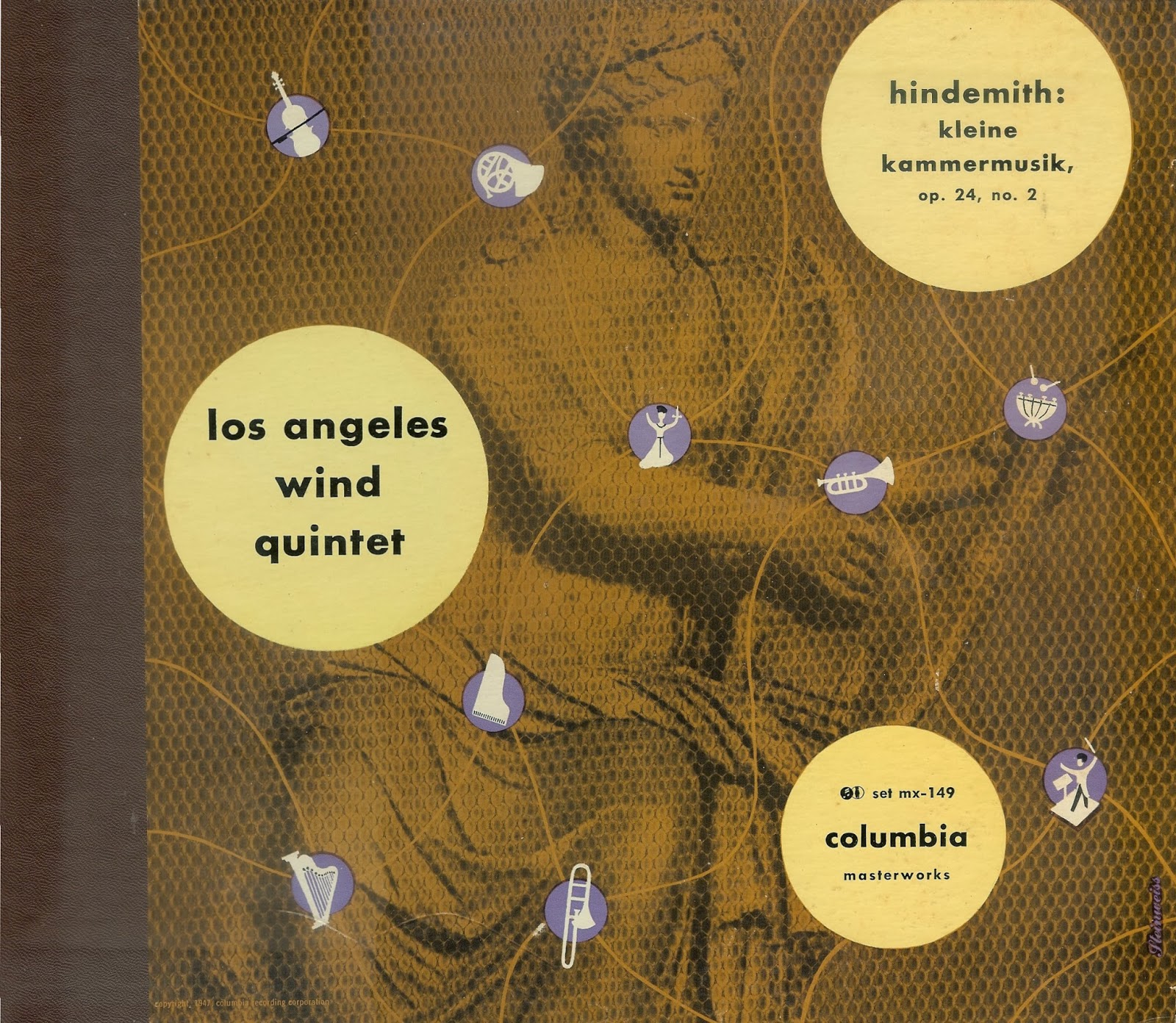 Good things come in small packages, goes the old cliché, and it's certainly true in this case.  Hindemith's delightful wind quintet, "Kleine Kammermusik" - the second part of an opus that also includes the first of his seven chamber concertos under the collective title of "Kammermusik" - may be small in size but it's big in entertainment value.  It's played here by a quintet of Hollywood studio musicians consisting of Haakon Bergh, flute; Gordon Pope, oboe; D. H. McKenney, clarinet; Don Christlieb, bassoon; and Jack Cave, horn.  The two players whose dates I have been able to trace online (Bergh and Christlieb) were both young men in their twenties when this recording was made, and I imagine the others were similarly young, for they are fully in sympathy with Hindemith's idiom:

Incredibly, this is not the first recording of the piece; an earlier one was made acoustically by the Leipzig Gewandhaus Wind Quintet for Deutsche Grammophon-Polydor.  This, I expect, is ultra rare, and I hope to hear it someday before I die, although I cannot imagine it would be as fine as this Los Angeles performance.
Posted by Bryan at 4:29 PM 2 comments:

The symphonies of Carl Nielsen have, over the past fifty years or so, entered the international concert repertory, thanks in part to the advocacy of conductors with international reputations like Barbirolli, Bernstein and Herbert Blomstedt.  Sixty years ago, however, this wasn't the case; it seems that only Danish conductors and Danish orchestras were recording them.  But what recordings!  There is an intensity and commitment about them that later recordings, for all their relative polish, can't quite match.  The first conductor to record a Nielsen symphony was Thomas Jensen (1898-1963) - the Second, in 1944, for HMV.  Jensen had studied music theory with the composer, and played the cello under his baton.  Here he is leading that Cinderella of the Nielsen symphonic canon, the wonderfully wacky, anything-but-simple Sinfonia Semplice, in its first recording: 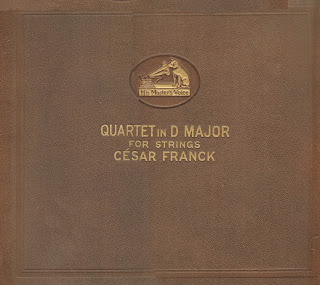 In the next (February 2014) newsletter of the 78rpm Community, I have a discography of the Virtuoso String Quartet slated to appear.  In tandem with this, I present their most ambitious recording, the first ever made of Franck's wonderful String Quartet.  This is already available at CHARM, as I have said before, but interest was expressed in my transfer, and there's one thing you will get from my download that CHARM doesn't have - the original liner notes!  These contain a reasonably good analysis of the piece, written by someone whose initials were "P.M.S.L.", and they also contain, at the end, a pat on the back for HMV's recording department - something Victor often did in their early liner notes, but it's surprising to see this from their staid English counterpart.  This was, in fact, one of HMV's last acoustical recordings, made over five sessions in 1925 just before they signed on to use Western Electric's system of electrical recording in May, and it remained in their catalogue longer than most of their acoustically recorded sets - until 1934, when it was replaced by the Quatour Pro Arte's version of the same work:

This is, for me, as fine a recording of the Franck quartet as any since, although it must be admitted that there aren't that many to choose from, at least from the pre-digital era.  Indeed, during the 1970s, the work was completely absent from the Schwann Long Playing Record Catalog!  I remember how eagerly I snapped up the Fitzwilliam Quartet's L'Oiseau Lyre recording (their first project after their famed Shostakovich cycle) when it was released in the USA in 1980, for it gave me a chance to finally hear the piece.
Posted by Bryan at 12:18 PM 2 comments: