As the 200th anniversary of the death of Johann Sebastian Bach approached in the year 1950, several record companies worldwide engaged in a flurry of activity making new recordings of his works, including several versions of the six Brandenburg Concertos.  Columbia had a version with Fritz Reiner conducting an ad hoc ensemble of New York players, and Decca had the newly-signed Stuttgart Chamber Orchestra under its founder, Karl Münchinger.  HMV countered with piecemeal issues of the six concertos with Mogens Wöldike leading two different Danish ensembles (Nos. 3 and 6 being done by an ensemble of soloists), recorded over a span of one-and-a-half years.  Nos. 4 and 6 of this set can be heard at the CHARM website; to complement these, I present Wöldike's readings of Nos. 3 and 5:

Herman D. Koppel, the harpsichordist in No. 5, can be heard in an utterly different triple concerto here - as pianist in Niels Viggo Bentzon's Chamber Concerto recorded the following year.

For those interested, here are the particulars of the order of recording for Wöldike's set of Brandenburgs, culled from Michael Gray's listings, WERM, and Frank Andrews' HMV "C" Series Discography:

Of the three composers of the Second Viennese School, Alban Berg has always been my favorite, because the expressive and emotional power of his music shines through the often harsh sounds of his chosen idiom (i.e., music not based in traditional tonality) more strongly for me than it does with the works of Schoenberg or Webern, geniuses though those two undoubtedly were. Berg was, essentially, a Romantic composer, and his best interpreters, which included Felix Galimir (1910-1999), have understood this. Galimir and his three sisters founded a string quartet while they were students at the Vienna Conservatory, which learned Berg's then-newest work, the Lyric Suite, being coached by Berg himself in its performance. (The full story can be read here.) At about the time of Berg's death, in 1935, the group recorded it - the first recording of any of his works: 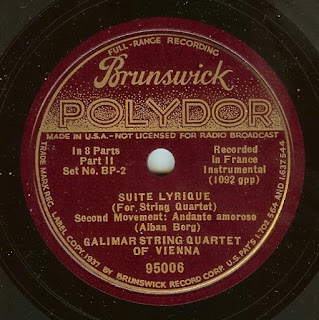 My source is a superb set of pressings on the short-lived Brunswick-Polydor label, the successor to Brunswick's gold-label classical series that also featured mainly Polydor material. Introduced in 1937, the entire series, such as it was, seems to have been retired when CBS purchased the American Record Corporation in 1939.  I have been able to trace information about only eight album sets in the series, as follows:

The first four sets were 12-inch sets, and the other four were 10-inch.  All except BP-6 and BP-8 had "slide automatic" couplings available as well, an "A" appearing after the album number to indicate this.
Posted by Bryan at 4:15 PM 6 comments:

For four years, Artur Rodzinski was the music director of the New York Philharmonic (1943-47), but his recording career with that august organization occupied only two of them - eighteen sessions from December, 1944, to October, 1946. The first of these produced recordings of Tchaikovsky's "Pathétique" Symphony and of Gershwin's "An American in Paris" that were quickly released. The second session, four weeks later, produced this Brahms symphony which, for reasons unknown, had to wait over a year and a half for its issue:

This was only the second recording of a Brahms symphony made by the Philharmonic; it was preceded by Barbirolli's 1940 version of the Second. (A complete cycle did follow in the early 1950s, conducted by Bruno Walter.)
Posted by Bryan at 7:27 PM 1 comment: 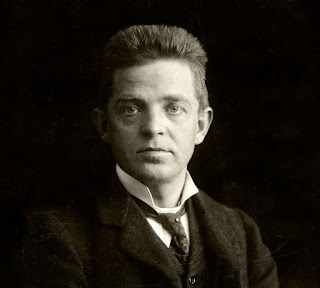 This year marks the 150th birth anniversaries of two giants of Scandinavian music - Jean Sibelius and Carl Nielsen. Sibelius' anniversary won't be for another six months, but Nielsen's is this Tuesday, June 9, and so I present two early recordings of his music - one of them, as far as I can determine, the very first recording of a large-scale work by Nielsen, a youthful violin sonata as played by his son-in-law Emil Telmányi:

The other offering is a mature piano work in a recording from late in the 78-rpm era:

Apropos of Sibelius and Nielsen, the two appear to have been friends. And the Finn admired the Dane's music greatly; the story goes that Sibelius, perhaps embarrassed by the obvious disparity in their worldly success, generously told or wrote to Nielsen (sources seem to differ which), "I don't even reach as high as your ankles!"
Posted by Bryan at 7:48 PM 5 comments: