Saturday marks the birthday of that phenomenon, Leonard Bernstein (1918-1990), and, to celebrate, I offer his first recording as a conductor.  Not, however, the first one offered to the public.  This recording of his ever-fresh ballet, Fancy Free, was made in June, 1944, for Decca - during the period when Victor and Columbia were unable to make recordings because of the Petrillo ban.  But it wasn't released until 1946, because it apparently took Decca that long to secure the definitive performance needed for the set's filler, that of Billie Holiday singing Bernstein's song "Big Stuff" (on which the ballet's Pas de deux section is based), with her lover at the time, Joe Guy, on trumpet.  In the meantime Lenny had switched his allegiance to Victor, which recorded and released two sets in 1945, both of his own music: a set of excerpts from On the Town (with Robert Shaw leading the chorus) and the Jeremiah Symphony (with the St. Louis Symphony).  I do not, alas, have these, but here is the Decca set:

Jack Benny Fiddles With the Classics 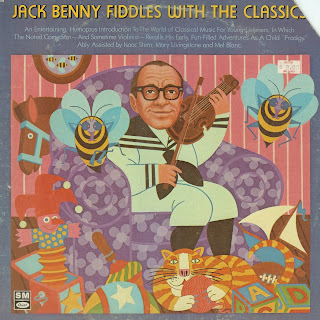 Sheer fun this week, as I present a children's album by that still much-beloved American comedian, Jack Benny (1894-1974).  Ostensibly a recording designed to introduce kids to the glories of the classical violin literature (excellently played by his friend Issac Stern), in Jack's hands it becomes a delightful story showcasing many of the facets of his on-air persona - his vanity, his bad violin playing; even his catchphrase "Well!!!" is worked in.  The record also features spoken contributions from his wife, Mary Livingstone, and the ever-dependable Mel Blanc.  Note also the delightful underscore by Billy May which accompanies the story portions, which seems to work in everything from Jack's trademark Kreutzer etude and Paderewski's Minuet in G, to "Hooray for Hollywood."  I have owned and loved this LP since my college days, when I purchased it from a local used record shop (my apologies for the nasty "cut-out" snip in the scan above, but that's how it was when I bought it!).  The album is a 1978 reissue of a 1956 release originally titled "Jack Benny Plays The Bee, Ably Assisted by Issac Stern":

That Jack Benny actually could play the violin quite well, when he wanted to, is proven by this YouTube posting of an excerpt from a 1961 concert in Carnegie Hall, where he plays the first movement of the Bach Double Concerto with Issac Stern (and Eugene Ormandy conducting):

Born and trained in Uruguay, Julio Martinez Oyanguren (1901-1973) seems to have been the only classical guitarist besides the great Andrés Segovia whose recordings were sold at premium prices in the USA.  (A mere handful of Segovia's HMV recordings were released here on Victor Red Seal.)  During 1936-37 Oyanguren made a number of recordings for Columbia in New York: 22 sides were released in the Masterworks line, all of which were deleted during the Second World War.  All of them were of short pieces except this one set:

The work itself, a charming one, is the third of four sonatas by the Catalan guitarist and composer Fernando Sor (1778-1839), and the first of two "grand sonatas" - the adjective apparently being used to denote a multi-movement work, as the two earlier sonatas are single-movement ones.  It was published in Paris in the mid-1820s, though possibly dates from earlier.
Posted by Bryan at 11:51 AM 1 comment:

What could be a better accompaniment to the 2012 Olympics than that most athletic-sounding work by an Englishman (at least in its outer movements!), the Concerto for Double String Orchestra of Michael Tippett (1905-1998)?  And so I present not only the first, but also the second, recording of this piece, both, as it happens, conducted by the same man, Walter Goehr (1903-1960):

The two recordings make for a fascinating comparison.  The first one, made while Tippett was incarcerated for being a conscientious objector during the Second World War, is lean and brisk, with a quite small string body; the second one is richer in sound and broader in tempo, especially in the slow movement, which clocks in at over a minute longer than the earlier recording.  The 1943 set, which was recorded at an independent London studio (Levy's), was sold on subscription for a hefty price (42 shillings - about $8.50 at the 1945 rate of exchange).  The 1952 set was one of the last 78 sets to be issued by HMV before the advent of LP, and in fact, was reissued on LP when the 78s were withdrawn, coupled with the Rawsthorne Symphonic Studies conducted by Constant Lambert that I uploaded earlier this year.
Posted by Bryan at 1:17 PM 3 comments: