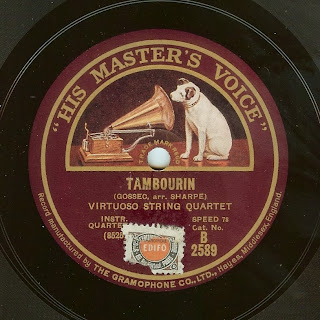 The Virtuoso String Quartet, with which I have dealt more extensively in this post, was founded late in 1923 by four British musicians apparently for the express purpose of making recordings.  While earlier string quartet ensembles (such as the Flonzaley, Catterall and Lener String Quartets) had begun their recording careers by being limited to making potboilers, isolated movements and abridgements from the string quartet repertoire before being permitted to record complete works, the Virtuoso String Quartet took the opposite trajectory during their brief career in the studios (1924-29).  They began by recording complete quartets by Tchaikovsky, Beethoven and Franck for HMV's more expensive Black Label series, but by 1927, had been switched to the cheaper Plum Label, and were recording potboilers!  Among them were these two charming miniatures:

I should mention that at the same time as I acquired this record, I also got the Virtuoso String Quartet's 1925 acoustical set of the Franck Quartet in D, in its original album.  This can be heard already at the CHARM website which has some 40 sides by the VSQ available for audition, some of them overlapping my offerings at the other post.  (They don't, however, have B 2589.)  But if there is any interest in my transfer I will attempt it (I probably will, anyway, sooner or later!).
Posted by Bryan at 10:22 PM 7 comments: 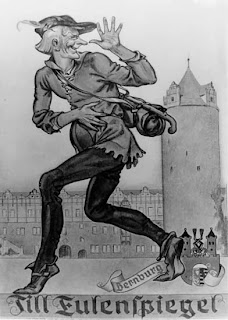 I must confess that the choice of "Till Eulenspiegel" for my latest post was inspired by being inundated with emails about "Black Friday" sales.  I get so sick of these, that it puts me into an Eulenspiegel-like attitude, specifically the wish to go upsetting marketplace goods and wares as he does in Richard Strauss' tone poem!  (When did the day after Thanksgiving get the name "Black Friday" anyhow?  It seems to me a recent phenomenon.  In the past the references were always to "after-Thanksgiving Day sales" in the papers.)  So what better time to enjoy this impudent masterpiece than now, and in as brilliant and high-spirited a performance as you are likely to hear anywhere:

It's worth noting that though the piece had been recorded at least a dozen times previously (including a couple by the composer himself), Rodzinski's appears to have been the first to be issued as part of an album set series.  Sets comprising only two records had been marketed for only five years, and then only in the USA.
Posted by Bryan at 5:39 PM 1 comment: 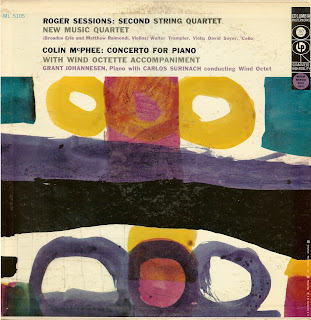 The New Music Quartet, founded in 1948 by violinists Broadus Erle and Matthew Raimondi, violist Walter Trampler, and cellist Claus Adam (later of the Juilliard Quartet), was much admired during its brief history - I think it may have disbanded in 1956 when Erle moved to Japan for four years.  (He later came back to teach at Yale and to head the Yale Quartet, where Trampler joined him.)  The New Music Quartet made a handful of recordings for Bartók Records (including the première recording of the Third Quartet by that label's namesake), then moved to Columbia where they produced eight or nine albums, among them the first recording of Hugo Wolf's Quartet in D minor.  Their last-issued recording, which occupied one side of an LP, was of this première recording of Roger Sessions' fine Second String Quartet:

By the time of this recording, David Soyer, later to be one of the founding members of the Guarneri Quartet, had replaced Adam as cellist.

The Sessions quartet strikes me as a modern answer to Beethoven's Op. 131, with its opening slow fugue, its long central variation movement, and its one-in-a-bar scherzo following the variations.  Instead of Beethoven's galloping finale, however, we get a particularly haunting slow movement.  The work has only been recorded three times to my knowledge - in the early 70s by the Kohon Quartet for Vox, and in 1987 by the Juilliard Quartet for CRI.  This pioneering version has, as far as I'm aware, never been reissued.

Its disc mate seems to me a mite incongruous - an early concerto for piano and winds by Colin McPhee (1900-1964), best known for his interest in Balinese folk music.  This work, less than half the length of the Sessions quartet, would seem to owe a lot to Stravinsky, and it does bear some surface similarities to the latter's own piano concerto, especially in the last two movements.  But the opening of the first movement is utterly dissimilar - instead of Stravinsky's pompous neo-Baroque introduction there is a quiet, Impressionistic texture that seems to start in medias res:

It almost never happens these days that I go into a record store (or any other kind of store) and stumble upon any 78s worth buying, especially classical ones; the supply, never plentiful here in the South, has all but dried up.  Imagine my delight when, three weeks ago, I went into Records Galore in Clarkston, Ga., and found, among the three or four 78 sets tucked away in the back, this Reiner album (including his very first recording with the Pittsburgh Symphony, the "Ride of the Valkyries"), and very reasonably priced too (as you can see from the sticker on the above picture)!  I'm afraid it was the only set there that had both musical interest and acceptable condition, but there it was, and now I offer it to you, along with another Wagner set by Reiner that I've harbored for seven years, but never got around to transferring until now:

A Wagner Concert:
Prelude to Act I of "Die Meistersinger"
"Forest Murmurs" from "Siegfried"
Preludes to Acts I and III of "Lohengrin"
"The Ride of the Valkyries" from "Die Walküre"
Columbia Masterworks set MM-549, four 78-rpm records

For those who like to burn CDs from my downloads, or make playlists, I would suggest following the order of the "Wagner Concert" but inserting the "Tannhäuser" extract before the "Ride of the Valkyries" - this seems to give the best balance of moods and tempi.

MM-549 was one of several albums of reissues that Columbia issued in the closing days of the Petrillo recording ban in 1944, when the supply of backlogged recordings had run dry, and new ones from Europe were unavailable due to the war.  So they took four single records of Wagner already on the catalog, and cobbled them together into an album.  The resulting "Wagner Concert" was also part of Columbia's initial LP launch, and in that form would have been the first Wagner compilation to be listed in the fondly-remembered Schwann Long Playing Record Guide.  I always wondered why, under the Wagner listings, albums of compilations of his music were under the heading "Wagner Concert" while all the other composers' compilations were under headings like "Music of Beethoven," "Music of Brahms," etc.  This issue, I've decided, has to be the reason....
Posted by Bryan at 7:20 PM 8 comments: