About a month ago, I sprang for the recent Decca big box (53 CDs) called "Decca Sound: The Mono Years." Some real gems are rattling around in there, and one of the highlights has been the set of four Bloch string quartets played by the Griller Quartet, who were the dedicatees of the master's Third Quartet of 1952. But it struck me as I was listening to this, that the recording is different than another one that I've had on a ten-inch LP for some time, and consulting Philip Stuart's Decca discography revealed the reason why: the recording on the ten-incher was not reissued in the complete set - instead, an entirely new recording was made, even though it was a mere year later! The earlier recording, which to my knowledge has never been reissued, was made a mere five days before the British première of the piece:

The main difference between the two versions seems to be one of playing time: the earlier one is nearly two minutes slower than the newer one. 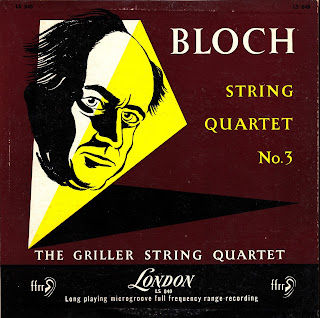 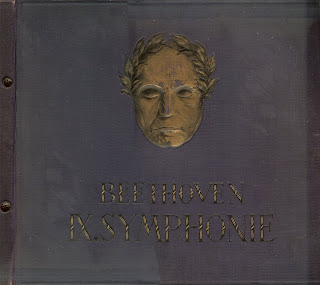 This is my 300th post on this blog - can you believe it? Something really big seemed called for, so I offer a recording that I have posted before, but this time, it's complete! Seven years ago I offered all I had of this pioneering recording of Beethoven's Ninth Symphony, almost certainly the first complete one ever made, but that was only the first two movements. Now I have the whole thing, complete with album (the cover is pictured above) and I am pleased to present it now:

Bruno Seidler-Winkler (1880-1960), the hero of this undertaking, had been the music director of Deutsche Grammophon since 1903, and left that position the year this recording was issued, so this must have seemed at the time a fitting cap to his career there. But in fact, it was the opening salvo in Deutsche Grammophon's bid to have all nine Beethoven symphonies recorded and available for sale. In the same month as this Beethoven Ninth recording was issued (December, 1923), Seidler-Winkler's of the Fifth and Pfitzner's of the Sixth were also released, according to Claude Arnold's "The Orchestra on Record, 1896-1926" (Greenwood Press, 1997). Here are the details of DGG's first Beethoven symphony cycle, in order by catalogue number:

Parlophon, with the same pool of Berlin players working under Eduard Mörike and Frieder Weissmann, entered the race as well in 1924 (intriguingly, also with the Ninth). By March, 1925, they had all nine recorded and available for sale, while DGG lagged with their last two issues.

The Seidler-Winkler Ninth seems to have been more widely disseminated than some of the other Beethoven symphony sets. Vocalion in the USA carried it - in fact it appears to be the only album set they ever issued from DGG sources. They took out an ad in the Talking Machine World magazine of November 15, 1924 (image borrowed from Allan Sutton's "Recording the Twenties", Mainspring Press, 2008): 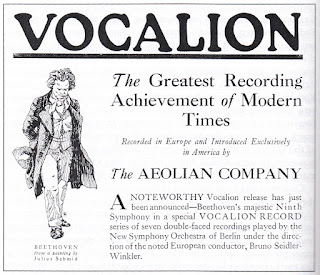 And from eBay I borrowed this image of one of the Vocalion labels (notice their characteristic red shellac was used): 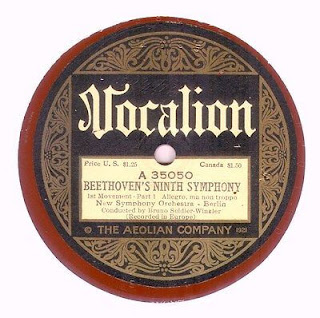 In Europe, outside Germany, the set was first marketed with the "dogless" Gramophone label (one of the spookiest designs on a record label I have ever encountered! - again, an image borrowed from eBay): 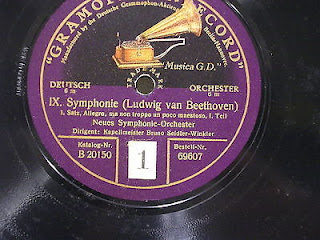 My copy, however, is a German one, with Nipper in full-color glory: 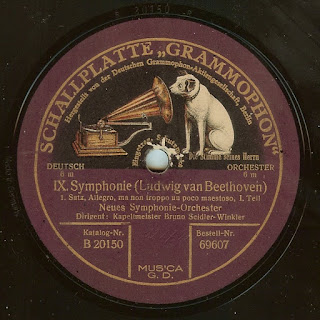 This week, a fine recording by the French flutist and conductor, Phillippe Gaubert (1879-1941) - the Second Suite from Ravel's ballet "Daphnis et Chloé" - a piece which, with its beautiful flute solo in the middle section, one imagines was close to Gaubert's heart. It isn't the first recording of this music - Koussevitzky beat Gaubert to that honor by eighteen months - but it is the first made in France, and was the only competing version to Koussevitzky's throughout the 1930s:

My thanks go to Adam Schweigert for the loan of this and several other sets that I have posted here earlier this year, among them Szell's first Cleveland recording of Mozart's 39th Symphony, Stock's of Brahms' Tragic Overture; Barbirolli's of Brahms' Second; Kubelik's of excerpts from Smetana's Ma Vlást, and excerpts from the film Humoresque played by Isaac Stern.
Posted by Bryan at 1:05 PM 1 comment:

Early Music from Germany in the 1930s 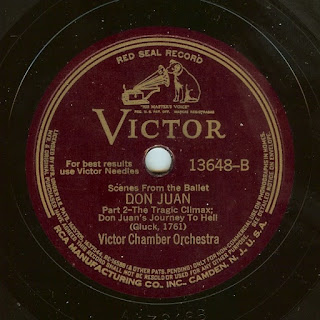 Well, I'm back online, thank God, and on a new laptop to boot. So for my first offering post-crisis, something easy for me to prepare, and that means dipping into my reclaimed record pile. These two records are somewhat related, for they both were recorded in Berlin in the 1930s, and they both are of German music of an earlier time. Here are the particulars:

As will be seen in the picture above, Victor did not deign to correctly identify Herr von Benda's orchestra, substituting instead its own pseudonym in something reminiscent of the days of acoustical recording. Irving Kolodin, in his 1941 Guide to Recorded Music, rightfully took a dim view of this, praising the performance (and giving the conductor his rightful credit) while commenting, sourly, about the "implication of the label that it was made in America by a conductor so obscure that his name need not be mentioned...Surely Victor cannot expect us to endorse such feeble anti-Nazism as this evasion of a reasonable responsibility."
Posted by Bryan at 4:03 PM 7 comments: 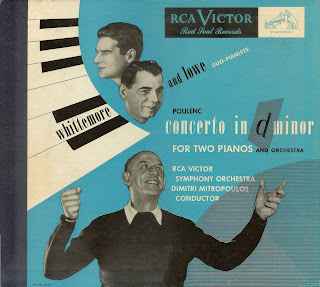 I'm having ISP problems right now, and having to type this on the fly using my church's wi-fi (a friend did the actual uploading of the files), so I don't have time to say anything more about this set than that it appears to be the first recording of this delightful work: