The Irish composer and pianist Howard Ferguson (1908-1999) seems to have been one of the few contemporary composers championed by the great Dame Myra Hess (one thinks of Beecham championing Delius, or Benno Moiseiwitsch his fellow Russian-turned-Englishman Medtner), who, at the outbreak of World War II, enlisted Ferguson's help in running the famous National Gallery concerts in London.  She recorded, during the war years, two of his works: the Five Bagatelles, and this fine Piano Sonata:

This Sonata was written in memory of the pianist Harold Samuel (1879-1937), famous as a Bach interpreter, who was Ferguson's first teacher, and through whom Ferguson met Hess.
Posted by Bryan at 7:26 PM 1 comment:


Today I present a recording that is very dear to me, as it was my introduction not only to this wonderful symphony, but the very first set of 78s I ever bought (or, more accurately, that was bought for me, by my grandmother, for $8.49 plus tax) at Clark Music, the wonderful music store that I wrote about in this post.  I was all of 10 years old, that fall of 1973, when I discovered the place, and of the twenty or twenty-five classical album sets in mint condition there that had remained unsold since the late 1940s, this one beckoned to me, mainly because I knew Schubert to be a Great Composer - I don't think I had even heard of most of the other composers represented in that motley collection - and moreover, it was a great big Symphony on six records!  Such is a child's reasoning.  Of course, this isn't the same copy as that one.  I wore that one out within two or three years, eventually obtaining another to replace it, which was sold off along with most of my 78s eight years ago.  This copy came to me courtesy of Ken Halperin of Collecting Record Covers:

Bruno Walter, it seems to me, came closer to the essence of this symphony than anyone else, and I don't think I'm saying that merely because I "learned" the work through this recording.  This is the second of his three recordings of it - the first was in 1938, with the London Symphony for HMV, and the last was in 1959, with his California-based, eponymous Columbia Symphony Orchestra.
Posted by Bryan at 1:10 PM 4 comments:

Back in 1998-99, I was active in a local chamber orchestra, the Georgia Sinfonia, as a writer of program notes for concerts (and, when the repertoire required it, as continuo harpsichordist).  I have decided to perpetuate my program-note writing by means of this blog, an idea given to me by Satyr when he told me some time ago how he enjoys my writing about music and musicians no less than my record transfers.  I hope the rest of you will agree.  Here is the first Georgia Sinfonia program for which I wrote notes: 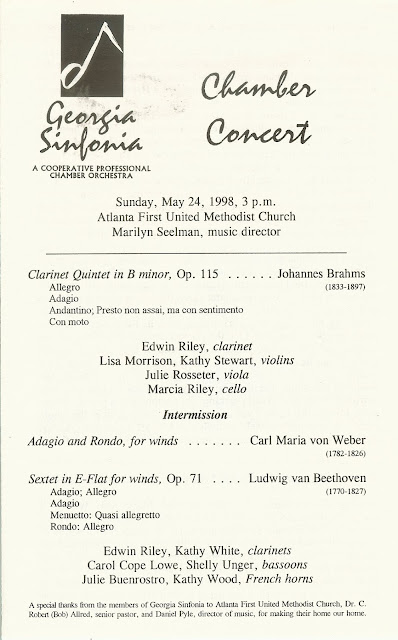 And below are reprinted the program notes themselves:


Brahms: Quintet in B minor, Op. 115, for clarinet and strings

Johannes Brahms, although an indisputable master of orchestration, never felt truly comfortable writing for instruments other than his own, the piano.  In maturity, even while writing the four symphonies which became, and remain, the finest since Beethoven’s, he never quite gave the same importance to instrumental color as to harmony, counterpoint, or form.  Nor, with his rather prudish, severe North German temperament, did he revel in the sensuality of sheer sound as did, say, Tchaikovsky.  That is, until he heard Richard Mühlfeld, clarinettist with the Meiningen Orchestra (which Brahms conducted regularly), play the Mozart Clarinet Concerto in March 1891.  Captivated by the darkly singing quality of the instrument in Mühlfeld’s hands, he befriended the clarinettist, nicknaming him “Fräulein Klarinette” - Miss Clarinet - suggesting unequivocally that Brahms had found an inspiration from the instrument that matched in intensity those previously given to him by the women in his life.

His last four chamber works would feature the clarinet.  First came the Clarinet Trio (clarinet, cello and piano), then what he called “a far greater folly,” the Quintet for clarinet and strings, both written in the summer of 1891.  Three years later came the two sonatas for clarinet and piano.  The Quintet, in fact, turned out to be Brahms’ last work involving more than two performers; after it, there were only the piano pieces of Opp. 116-119, the clarinet sonatas, the Four Serious Songs, and the chorale preludes for organ of Op. 122.  Thus the Quintet can be seen as Brahms’ swan song among his large-scale works.  In his splendid recent (1997) biography of the composer, Jan Swafford states that “the music so clearly looks back on lost love with a distillation of Brahmsian yearning...its beginning a gentle, dying-away roulade that raises a veil of autumnal melancholy over the whole piece.”  It is formally loosely modelled on Mozart’s Clarinet Quintet; both works have as a concluding movement a theme and variations.


Weber: Adagio and Rondo, for 2 clarinets, 2 horns and 2 bassoons

Among the instrumental works of Carl Maria von Weber, a conspicuous place is given to music for wind instruments.  There are concertos for clarinet, bassoon and horn, in addition to a series of pieces for wind ensembles.  Most of the latter were composed for Prince Carl Friedrich of Löwenstein-Wertheim, an enthusiast for wind ensemble music whom Weber met while he was in the employ of the Duke of Württemberg, from 1806 to 1810.  This ensemble music is relatively little known (it is not listed in Otto Jahn’s thematic catalog of Weber’s works), having been published only beginning in 1970, after languishing in the Bibliotèque Nationale in Paris for over a century.

The Adagio in E-Flat is dated July 6, 1808; the Rondo in B-Flat was written earlier, completed June 24 of the same year.  One might be forgiven for assuming that it might have formed two movements of a larger work in B-Flat, but in fact the two-part slow-fast formation was a favorite with Weber.  He used it for several other works, including the well-known "Andante and Hungarian Rondo" for viola and orchestra (later rewritten for bassoon).

Although bearing the opus number 71 (and therefore, standing between the Sixth and Seventh Symphonies in Beethoven’s catalog of works published), the Sextet in E-Flat for winds in an early work, dating from 1796, thirteen years before its publication.  Beethoven offered it to his publisher with an apology, saying that it “was composed in one night - All that one can really say about it is that it was written by a composer who had produced a few better works, yet for some, works of this type are the best.”  The work was certainly not written in such a short time.  Beethoven’s comment represents the tetchy annoyance of a composer towards his public, which preferred “easy” works like his Septet for strings and winds, Op. 20 (a piece he came to hate, as passionately as Rachmaninoff came to hate his C-sharp minor Prelude) to what he rightly considered his more significant utterances such as the symphonies, concertos and string quartets.  This same annoyance caused him to belittle so beloved, yet so innovative a work as the “Moonlight” Sonata: “upon my word, I have written better ones...”

Beethoven produced a fair amount of wind ensemble music in his early years (other examples are the Octet for winds, Op. 103, and the Quintet for piano and winds, Op. 16), but virtually abandoned the medium after about 1800.  Despite their light character, the works are important in Beethoven’s output, for they surely helped the young composer develop his treatment of wind instruments in the symphonies.  They also allowed him to polish his handling of large-scale forms, in music that was traditionally not considered “serious” (despite Mozart’s masterly serenades for wind instruments) before tackling them in the more serious genres of string quartet and symphony.
Posted by Bryan at 1:02 PM 3 comments:

This wasn't planned - I actually didn't realize that it was Ormandy's birthday (his 113th) until about an hour ago, and by that time I had finished processing the download that I offer here!  On the East Coast of the US, which includes Philadelphia, the city where he made his mark, there are about two hours left in Ormandy's birthday, so my comments shall be brief.  This is the first of two recordings he was to make of the Brahms Third Symphony (the second one was made as part of a Brahms cycle in the mid-60s): 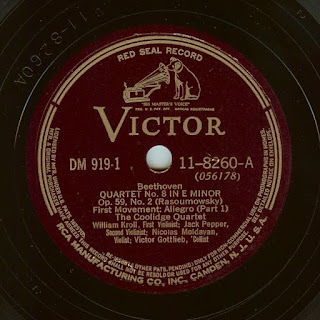 About a year ago, when I was doing my "reissue" series, I devoted one post to the Flonzaley Quartet and two groups that contained members of that famous ensemble after it disbanded.  One of these was the Coolidge Quartet, whose violist, Nicolas Moldavan, had been in the Flonzaley Quartet.  This very interesting group was founded in 1936 by violinist William Kroll, who remained the only constant presence in the quartet until its disbanding in 1944.  The other original members were violinist Nicolai Berezowsky and cellist Victor Gottlieb.

In 1937 they began recording for Victor, and a big project was undertaken: a complete recording at popular prices of the Beethoven string quartets.  It should be explained that until 1940, when all Red Seal records were reduced in price to $1 each per 12-inch disc, there were two tiers of pricing for them - a cheaper series at $1.50 and a more expensive series at $2.  The Coolidge Quartet's non-Beethoven recordings sold at the higher rate, as did recordings by other, more prestigious chamber music groups such as the Budapest and Busch quartets.  But with the price reduction, the Beethoven project sort of ran out of steam, and it stopped short, halfway, with the work I present here:

By the time this recording was made, the American-born Jack Pepper had replaced Berezowsky as the group's second fiddle.  By the following year (1941), Moldavan would be replaced by another American, David Dawson on viola, and Gottlieb would be replaced by the Russian-born Naoum Benditzky on cello.
Posted by Bryan at 9:15 PM 4 comments:

Next year will see the centenary of American composer Norman Dello Joio (1913-2008), godson of Pietro Yon (famous for the Christmas carol "Gesu Bambino") and student of Paul Hindemith - although, unlike many of Hindemith's composition students, his music sounds nothing like his master's.  To get a jump on the celebrations, I present a work which, as far as I can tell, has received only this one recording, and that shortly after the work was written.  This is his Harp Concerto, a two movement-work consisting of an Introduction and Passacaglia, and a Scherzo-March.  This is masterfully played by Edward Vito, at the time principal harpist in Toscanini's NBC Symphony.