For the end of 2014, a little Wagnerian treat featuring that great exponent of the master's soprano roles, St. Louis-born Helen Traubel (1899-1972), along with the Swedish tenor Torsten Ralf (1901-1954), whose birthday, incidentally, is next Friday (Jan. 2).  This is the duet from Act II, Scene 2 of "Tristan und Isolde" - actually a trio, because it's interrupted at two points by Brangäne, Isolde's maid, offstage, but her music is often either omitted from concert performances of the duet, or sung by the soprano taking Isolde's role (as Kirsten Flagstad did in her 1939 studio recording with Lauritz Melchior).  This recording appears to be the only one made during the 78-rpm era with a third singer taking her rightful lines - the Vienna-born Herta Glaz (1910-2006):

My thanks to Adam Schweigert for sending me this set and several others as a result of discussions originating in the comments section to this post.  And my thanks to Peter Joelson for his restoration work on the cover image, another beautiful Steinweiss design: 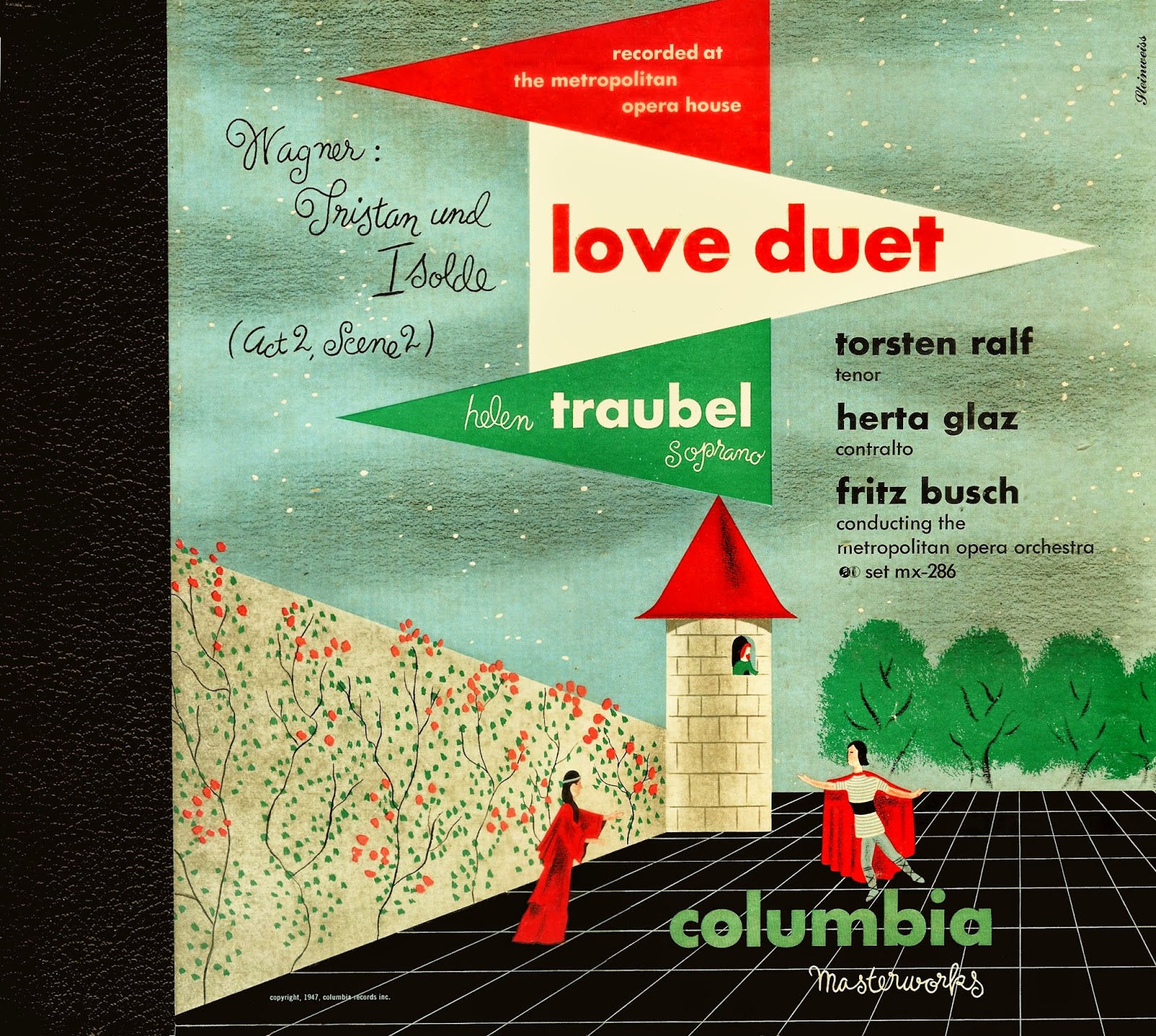 My best wishes to everyone for a happy, healthy and prosperous 2015!
Posted by Bryan at 3:03 PM 2 comments: 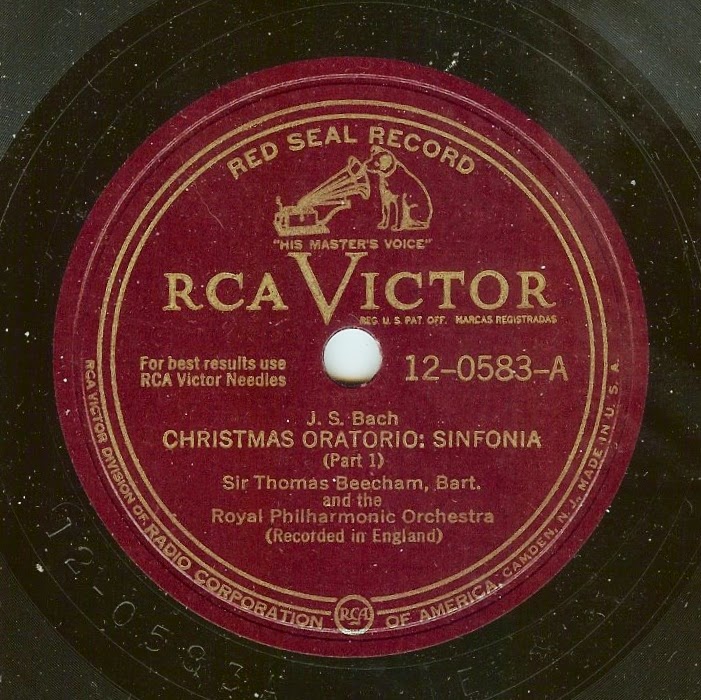 The great Sir Thomas Beecham (1879-1961) was renowned for his interpretations of older music, especially his unique Handel arrangements, but he seems to have had a blind spot when it came to Bach. It's unclear why. Maybe the heaviness with which Bach was usually interpreted in those days turned him off; maybe it was rivalry with Sir Henry Wood, who was famous for his renditions of the Brandenburg Concertos. Whatever the reason, the fact that he could, when he was so moved, turn out a perfect gem of a Bach performance is amply demonstrated by this record, which also contains one of his inimitable Handel transcriptions:

This record was only issued in the USA, never by HMV in Europe.

As I may have mentioned here before, in my heyday as a 78 collector I had a collection of over 8,000 discs, which I was forced to sell in 2003-04 for financial reasons. Some of these I had had since childhood. Among them were several by the First Piano Quartet, and when in my recent post devoted to this ensemble, a commenter mentioned a recording of the Paganini Variations, I thought to myself, ruefully, "yes, I used to have that record, and wish I still did."

Well, a few days later, I was at my parents' house for Thanksgiving dinner, and my mother mentioned that there were still several boxes of my records in the basement. This was news to me; I had thought they threw out all the unsold stuff years ago. I went to investigate and found lots of junk, of course - many sets with broken or missing records which I had never tried to sell, but also several dozen single records, some of which I was genuinely surprised to see hadn't sold. Among the latter was this Beecham Bach record. And yes, I did get my First Piano Quartet records back - it was like an early Christmas present! The reclaimed records were somewhat the worse for having been stored in a damp basement for 10 years, perhaps, but still quite playable, and now I share the first of these with you all.

Merry Christmas, everyone!
Posted by Bryan at 1:21 PM 11 comments:

The commercialization of Christmas that has taken place over the last hundred years or so gave rise, during the 1940s through the 1960s, to a cottage industry in secular Christmas songs to supplement the traditional carols of yore.  These have ranged from inspired ("Have Yourself A Merry Little Christmas" - especially as sung by Judy Garland in "Meet Me In St. Louis") to great fun ("All I Want For Christmas Is My Two Front Teeth") to insipid drivel ("Have a Holly Jolly Christmas").  For me, it is one of the tragedies of the age that Burl Ives (1909-1995), with all his talents as a folk singer and actor, seems destined to be remembered by younger generations only for his hammy rendition of that stupid song, a rendition that has always sounded to me like he hated it, too.  With this week's offering I attempt to redress the balance, by presenting the second Columbia album featuring his inimitable and beautifully sung stylings of folk-song material: