Here is the first recording of Shostakovich's First Piano Concerto, for piano, trumpet and strings.  It's played with panache by the Australian pianist Eileen Joyce (1908-1991), accompanied by the Hallé Orchestra (with principal trumpeter Arthur Lockwood) under the tragically short-lived Leslie Heward (1897-1943).  This recording was actually presented about a month ago by Tin Ear at The Music Parlour, as part of a series of Leslie Heward recordings, but that derived from a 1985 LP transfer, whereas mine is from the actual 78s (American pressings of British matrices), so I hope Tin Ear will forgive my encroachment upon his territory.  Besides, with my transfer you also get the filler side, a solo piano recording by Eileen Joyce of two Scriabin preludes.  And it gives me an excuse to present another Steinweiss cover: 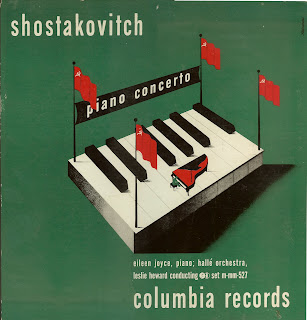 This is the third copy of MM-527 that I have owned; the first I acquired on a hot summer day in 1976, when I was thirteen.  I was strolling the streets of downtown Decatur, Ga., probably going from the library to catch the bus home, when I spied a new used-bookshop called Cantrell's Books and Things at 112 E. Ponce de Leon Avenue (now the site of a folk art gallery intriguingly called "Wild Oats and Billy Goats").  Going in, I found that among the "things" were one wall lined with 78-rpm classical sets going for 50 cents per disc.  I had about four and a half dollars on me, so I bought as much as I could afford, namely, two sets: one was Beethoven's Op. 132 quartet played by the Budapest Quartet (Columbia MM-545) and the other was this Shostakovich piano concerto recording.  I had recently discovered Shostakovich and knew several of the symphonies but none of the concertos.  I loved Op. 35 on first hearing; it is still one of my favorite Shostakovich works, and this is still my favorite recording of it.

Another record by Miss Joyce is this one of two Beethoven bagatelles, including the ever-popular "Für Elise":

And from Leslie Heward, two recordings that I uploaded previously, of Haydn and Mozart, which are still available: 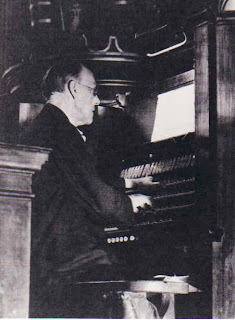 This week I present several recordings of Handel organ concertos by two British organists that, decidedly, represent a bygone style of playing this music!  Featured first is George Dorrington Cunningham (1878-1948), who went by the rather unfortunate initials "G. D." (I wonder if they had the same connotations in those days?), and who was appointed Birmingham City Organist in 1924.  E. Power Biggs was one of his students.  His recordings of two Handel concerti, with George Weldon and the City of Birmingham Orchestra, were made late in his life, and exhibit a considerably beefier style of Handel playing than we are accustomed to today, with a big organ sound and a full symphonic-sized string orchestra accompaniment:

If the Cunningham performances seem oversized, they're positively sedate compared to what follows.  Cunningham's student, and successor as Birmingham City Organist, was George Thalben-Ball (1896-1987), who here turns in a performance of Handel's Organ Concerto in B-Flat, Op. 7, No. 3, as arranged and orchestrated by Sir Henry J. Wood.  Thalben-Ball's playing is flamboyant, to say the least, and the Wood orchestration, for full symphony orchestra with brass and percussion, is certainly anachronistic but it's great fun!  Handel's original ordering of the movements is also altered, and this perfomance interpolates not only the Minuet from "Berenice" but also a big cadenza by Thalben-Ball that takes up most of the last side. 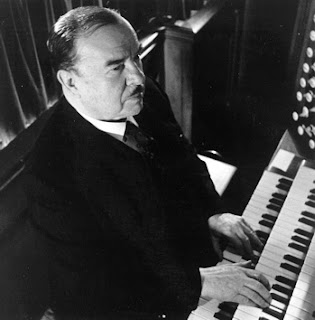 Sir Henry Wood, of course, was a great conductor who left a fair number of recordings himself (though his recorded legacy hardly does him justice), and among these were several featuring Baroque music.  One of the very first uploads I ever offered, way back in the spring of 2007, was one of him conducting two Bach Brandenburg Concertos, and this is still available for those who may have missed it the first time: 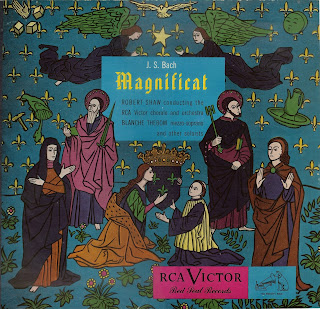 This week I present the first-ever recording of Bach's great Magnificat in D, the Virgin Mary's hymn of praise uttered while pregnant with the Christ Child (Luke 1:46-55).  This features the dean of American choral conductors, Robert Shaw (1916-1999) in one of his earliest recordings.  The chorus is the RCA Victor Chorale; the soloists are Suzanne Freil, soprano; Blanche Thebom, mezzo-soprano; Ernice Lawrence, tenor; and Paul Matthen, bass; and the orchestra is made up of New York musicians including William Vacchiano (of the New York Philharmonic), trumpet; Robert Bloom (of the NBC Symphony), oboe d'amore; and Arthur Lora (also of the NBC Symphony), flute.

It would be impossible to overestimate the influence that Robert Shaw had on American choral singing.  Toscanini famously said, after a 1945 performance of the Beethoven Ninth for which Shaw had trained the chorus, "in Robert Shaw I have at last found the maestro I have been looking for."  Shaw's influence on the musical life of my native city, Atlanta, is also incalculable.  To this day Atlanta is a city with many enthusiastic choral groups.  Shaw was music director of the Atlanta Symphony during my formative years (from 1967, when I was four, to 1988) and his choral concerts with the ASO and the ASO chorus were always big events.  In the spring of 1998 I was fortunate enough to hear one of his last performances, of the Bach B minor Mass.  I was sitting in the front row of Atlanta's Symphony Hall, and from the very start, with that big shout of "KYRIE" from the chorus I was jolted out of my seat, and remained on the edge the entire evening.  A magnificent performance in every way, the fruit of over fifty years of living with this great music.
Posted by Bryan at 11:59 AM 7 comments:

The Other (not Sigmund) Romberg 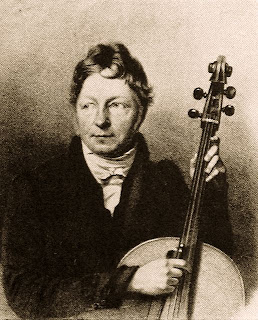 The German cellist and composer Bernhard Romberg (1767-1841) was an almost exact contemporary of Beethoven, whose works for the cello are still widely used as teaching pieces.  We have him to thank, unfortunately, for there being no Beethoven cello concerto - Beethoven offered to write one for him, but Romberg turned him down, saying that he preferred to play his own works.  Among these are ten cello concertos, eleven string quartets and three symphonies, plus this Toy Symphony that enjoyed a certain popularity in the 1800s.  It's a delightful piece in four movements with an especially enjoyable Rondo finale, and a score is downloadable from the Petrucci Music Library here. 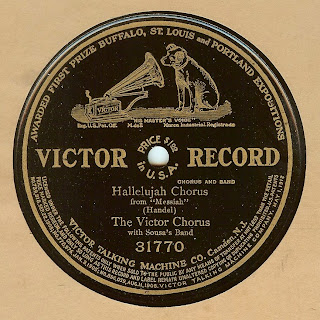 This post is a follow-up to my August post of recordings by Arthur Pryor's Band, though the range is a little bit broader, including a few "popular" selections, and including one recording in the spirit of the Christmas season - though it actually was recorded four days after Christmas, 1909, and released for the Easter 1910 trade!  Perhaps a hundred years ago the Hallelujah Chorus was associated more with Easter than with Christmas, which makes sense, given its placement in the Handel oratorio.  In any case, it's sung here by a mighty chorus of eight, accompanied by Sousa's Band.  It's one of thirteen pieces in this collection of downloads, from five different concert bands, one from south of the border and one from "across the pond."  Here are the details (fuller discographic information is given in the text file included with the downloads):

Of the music itself it isn't necessary to say much, except that Sousa's "Wedding March" was composed in 1918 to replace those of Wagner and Mendelssohn due to anti-German sentiments during World War I - which, thank goodness, it obviously didn't do!  And I make no apologies for including "Dixie" - a grand old tune still loved by many of us Southerners even though the words no longer really represent us.  What better excuse to enjoy a band arrangement?

All of these are Victor recordings except the one of Tchaikovsky's "Overture 1812," which was one of the few acoustic recordings made by the Grenadier Guards Band for English Columbia to be released in the US by American Columbia. 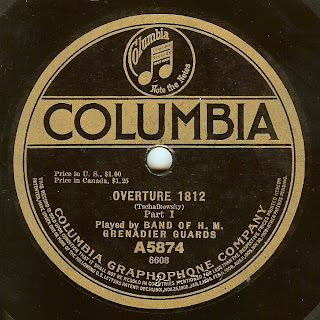