Some more light listening for the summer months - a set that would have been the first exposure of many Americans to the genius of harmonica king Larry Adler (1914-2001), of whom Sting, with whom Adler collaborated towards the end of his life, said "he was one of the youngest old men I've ever met." This album, released in 1940, is a reissue of some of Adler's most successful sides for English Columbia:

Reportedly, when Gershwin first heard Adler play his "Rhapsody in Blue" he exclaimed, "it sounds as if the goddamned thing was written for you!" And Ravel, upon hearing Adler's record of his "Bolero" - but let's let Adler himself tell the story (as extracted from his entertaining memoir, "It Ain't Necessarily So", published in 1984)":

"I had a call from Jacques Lyon, who ran a record shop, the Sinfonia, on the Champs-Elysées. He said he'd had a call from Maurice Ravel who had heard that I played his Bolero and wanted to hear me. I couldn't stand before the maître playing without accompaniment so I brought my record with me. We drove to Montfort-d'Amaury, outside Paris and had a hard time finding Ravel's house - no one seemed to have heard of him. When we did find it, Ravel opened the door, took the record and before Jacques could even introduce me, put it on. Until then I'd thought it was a good record, it was a big seller and I was proud of it. Standing there while its composer listened to it I was aware of imperfections, of mistakes that I had never noticed. It sounded awful and, though it was on one side of a 78-rpm record, it seemed interminable. When it finished, Ravel spoke to Jacques.
"'The master he say, you play it very fast. Why?'
"Hell, I didn't know why. I hadn't ever known that I did play it fast. Ravel spoke again.
"'The master he says you have made cuts, you do not play the whole thing. Why?'
"I explained that, in music-hall, my act ran fifteen minutes, which was the length of Bolero. I loved the number, I meant no criticism but, to include it, I had to make cuts.
"Jacques said, 'The master he ask, do you know Arturo Toscanini?'
"Yes, I had met him.
"Jacques said, 'The master, he say that Toscanini plays the whole thing.'
"Well, he had me there. What could I say? The conversation languished. I held out the record to Ravel to sign. (I had never asked for an autograph before, have never asked for one since. It was pure embarrassment.) Ravel looked surprised.
"Jacques said: 'The master say, he thought the record was for him.' Now I was surprised. Ravel had given every sign of loathing the record and me. Then Ravel held up his hands, they were shaking. He said that he had palsy, had written nothing in the past five years. I apologized and we left. A few days later Jacques phoned me and told me to get to his record shop at once; the master was there. Ravel was bundled in a heavy coat and a scarf though it was a warm day. He said that, by sitting in a dark room and concentrating, he had been able to steady his hand, long enough to write his signature and he had brought it to me. I was touched and honoured by Ravel's gesture but felt guilty as I hadn't really wanted the autograph.
"In 1940 I was soloist with the Philadelphia Orchestra's Robin Hood Dell concerts. Saul Caston, the conductor, suggested an encore; when I chose Bolero the librarian objected. Performance fees for one performance were very high, not worth it for an encore. Elkan, Vogel, Ravel's publishers, were in Philadelphia; I went to their office and announced myself. Mr. Elkan came out and told me he knew about me. Ravel had left instructions that I was to have free rights to play the Bolero in whatever medium I pleased. That right is unique to me."
Posted by Bryan at 5:41 PM 4 comments:

This week I present two symphonies from Sweden, one of which is probably the most famous to come from that land, while the other is not as well known, perhaps, but should be. The former, of course, is Kurt Atterberg's notorious "Dollar" Symphony, so called because it was the prize-winning entry in Columbia's Schubert Centennial contest of 1928 (with some of the $10,000 that he won, the 41-year-old composer bought his first automobile, a Model A Ford). Much nonsense was written about this work at the time, for it was believed that Atterberg (1887-1974) had plagiarized much of the symphony's material. What remains at this 88-year distance is a fresh, enjoyable, fun three-movement symphony that seems to fully justify its prize. One of the conditions of this prize was that Columbia recorded the piece (with Beecham and the Royal Philharmonic), which is natural enough, given that they sponsored the contest. Almost unheard of, for a new work at that time, was for it to receive a second recording from a different company, under the direction of the composer: 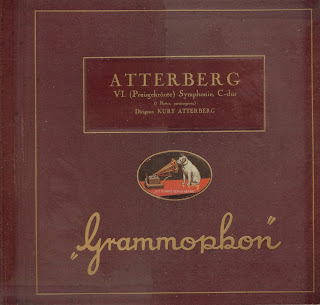 The other Swedish symphony here is the second of six composed by Gösta Nystroem (1890-1966), who spent much time in Paris during the 1920s. His music inhabits a much more modern-sounding world than Atterberg's (which is firmly rooted in the 19th century); it is tonal but dissonant (I'm strongly reminded of Frank Martin). The very fine Sinfonia Espressiva, composed in 1935, is in four movements: a long elegiac opening movement scored for strings and timpani is followed by a scherzo, passacaglia (on a Swedish folk song) and fugue, each subsequent movement adding more instruments to the scoring. Tor Mann, the conductor on this recording, gave the work's first performance in 1937:

In time for Bastille Day this year, another artifact from Occupied France, from a member of the Resistance, the violinist and conductor Maurice Hewitt (1884-1971). Hewitt, in earlier years a member of the Quatour Capet and of the Société des Instruments Anciennes, was also the founder of the acclaimed label "Les Discophiles Françaises" which specialized at first in early music. Hewitt himself directed many of its early recordings, including this one, an album containing two disc premières of important chamber works by François Couperin:

Couperin did not specify instrumentation for either of these works, merely two treble instruments and continuo; they are normally heard as trio sonatas. Hewitt uses his own arrangement for string orchestra with harpsichord, pardessus de viole, viola d'amore and viola da gamba. This is Couperin with a big, rich string sound, quite unlike what we are accustomed to hearing today.
Posted by Bryan at 10:51 PM 5 comments: 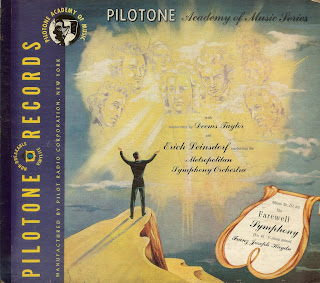 Haydn and Leinsdorf notwithstanding, a large part of the reason for this post is to pay tribute to Deems Taylor, who died fifty years ago this Sunday (July 3, 1966). Composer, author, journalist, and broadcaster, he had the gift of explaining classical music in layman's terms, similar to that of Leonard Bernstein a generation later. As intermission commentator for the New York Philharmonic broadcasts during the 1930s and early 1940s, heard throughout the USA, he exercised this gift, drawing countless listeners into what must have seemed to many of them a rarefied world. In 1946, the Pilot Radio Corporation hit on the idea of marketing symphonic albums with recorded introductory commentary, and it must have seemed natural for them to approach Deems Taylor for the job. In the event, however, only two sets appeared - Grieg's "Holberg Suite" (conducted by Rudolph Ganz) and this one:

This recording must have been made between Leinsdorf's appointments with the Cleveland Orchestra (which ended in 1946) and the Rochester Philharmonic (which began in 1947). It, and the Grieg set, were in the shops in time for Christmas 1946. That there were no further sets in the rather grandiosely named "Pilotone Academy of Music" series is perhaps explained by a lawsuit brought by the Metropolitan Opera Association against Pilot for their use of the word "Metropolitan" in the name of their pseudonymous orchestra.
Posted by Bryan at 1:25 PM 7 comments: